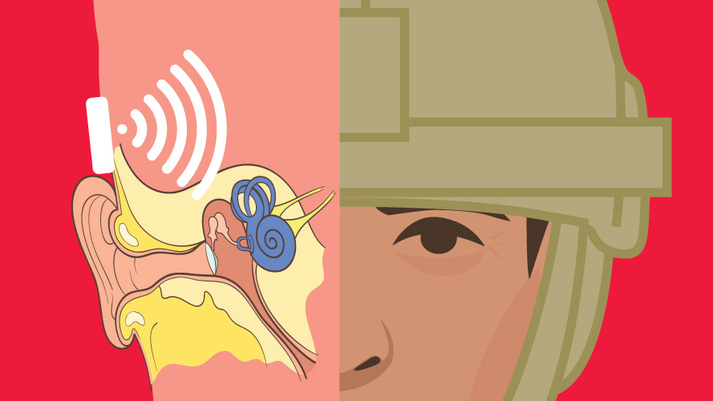 How many times have you walked up to someone and were unable to get their attention because they had headphones on? This is an increasingly important issue as we become more connected to our devices and less connected to the world around us. Recently, several companies, including Aftershokz and Pyle, have tried to solve this issue by creating bone conducting headphones.

How does bone conduction work?

Although these devices may seem futuristic, bone conduction has been used for hundreds of years, especially in applications involving music. In the 18th century, Beethoven, although he had lost much of his hearing, was able to listen to his music by clenching a rod in his mouth that was attached to his piano. In most situations, we hear sounds using air conduction in our ears. Our outer ear channels vibrations that travel through the air into our ear canal where our eardrum transmits these vibrations to our cochlea. Inside the cochlea, each frequency resonates at a different location along the basilar membrane, and these mechanical waves are converted into neural signals that are transmitted to the brain. Bone conduction works by sending these vibrations through our bones directly to the cochlea and bypassing the outer ear and eardrum.

How is bone conduction used?

As time and technology have progressed, bone conduction has become increasingly more common in commercial devices. Currently, the most prevalent use of bone conduction is in hearing aids for those suffering from outer or middle ear damage. Bone conduction is also used in applications where users must still be aware of their environment while listening to music or other sounds. Modern devices are able to transmit frequencies between 20 and 20,000 Hz. This range is perfect for listening to music and voices at reasonable volumes. Bone conduction can also be used in more demanding situations. BAE Systems has utilized bone conducting technology to manufacture helmets that allow soldiers on the battlefield and sailors competing in America’s Cup to communicate with each other while still being able to hear their environment. These grueling environments make perfect use of bone conducting device’s durability in hazardous conditions including water and dust.

What is the future of bone conduction?

Although many devices that utilize bone conduction like Google Glass and Zungle Audio sunglasses have not yet become mainstream. This technology still has a bright future. On February 24, 2019, LG unveiled its G8 smartphone which eliminated its top speaker for receiving phone calls. Instead, LG’s design creates sound by vibrating its front glass panel. The user can then press the screen against his or her face conducting the sound through his or her cheek to better hear the person on the other line. As implementations like these become more common, the technology behind bone conduction will only get better. It may seem like the future, but the next headphones or pair of sunglasses you buy might have bone conducting technology inside of it.

For more information on this story, check out The Verge and CNN.