We are the Themed Entertainment Association at Notre Dame (TEA@ND). We are an on-campus club focused on the following:

Our very first meeting was held at the beginning of the 2018 spring semester. As a fairly new organization we are always looking to connect with new people and to get engaged with new opportunities. Feel free to reach out to us at any of the contact information listed at the bottom of this site and explore our site to see what we are up to.

TEA@ND is proud to have sent several alumni to internships and careers with several TEA companies throughout its history. Such companies include Disney, Nassal, and TAIT. If you are looking for a way to work for any of those companies we are the resource to get you started!

Meetings are usually on Thursday evenings every other week and “TEA-torials” occur on the weeks in between. We have been fortunate enough to host guest speakers from Disney Imagineering as well as from the TEA executive board. Other meeting topics have included career development in the themed entertainment industry led by Ryan Willerton from the Center for Career development at Notre Dame, updates in the industry, and even free time to work on interclub competitions.

In February 2019, Tyler Emptage, a Disney Imagineer and Notre Dame grad from 2010, video called into our meeting. The club enjoyed the advice he shared and the opportunity to learn form someone with experience in the industry! In March 2019, Micahel Mercadante, the President of the TEA International Board of Directors and Notre Dame alum from 1980, and Marissa Blake, Chair of  theTEA NextGen Committee, video called with the club and shared their advice on getting more involved with the themed entertainment industry. 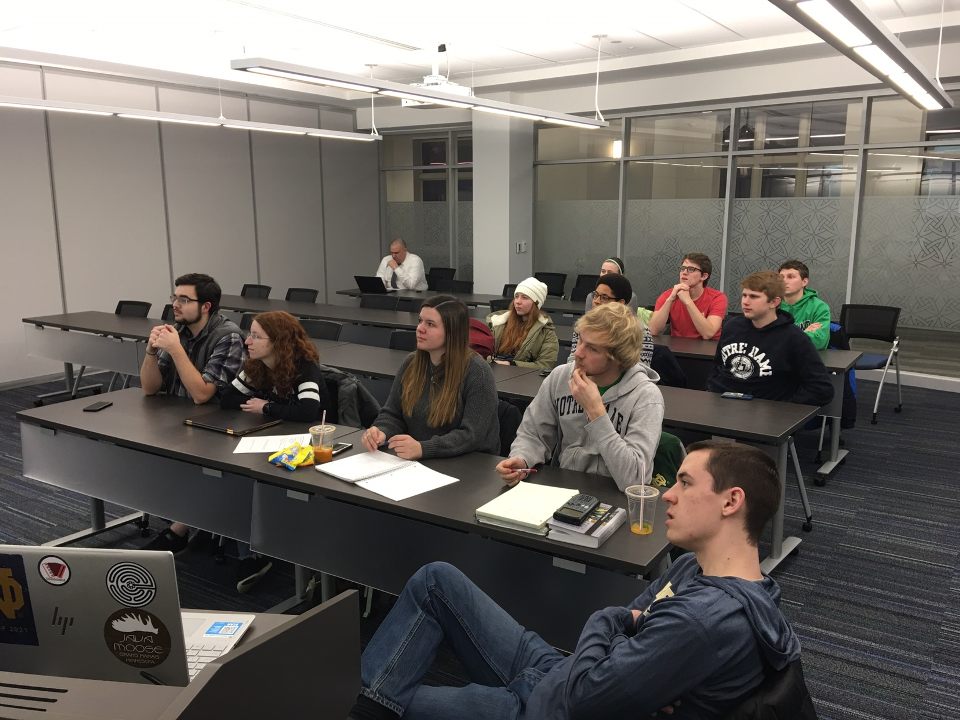 In the Spring of 2019 two of the club’s members, Jacob Plocher and Katelyn Wyatt, entered a competition held by the University of Nevada, Las Vegas. The competition consisted of designing an escape room with a heavy focus on story line and participant safety. Our team chose to recreate the famed story, “Theseus and the Minotaur.” The participants must solve the labyrinth, defeat the Minotaur, and escape within an hour. Would you be up to the challenge? During the 2018-2019 school year, a group of students entered Disney’s Imaginations Competition. This annual competition is open to all juniors and seniors in college and has a different prompt each year. Jack Bodien, Olivia De Sonne Ammaccapane, Jack Bruck,  and Julian Mancini took on this year’s task to design an experience that explored a Natural or Ancient Wonder of the World. Here is the project that took our team to the semi-finals. Check out the article that Jacob Plocher, the club’s current President, wrote for Notre Dame’s Scholastic magazine here. Make sure to scroll down to the 3rd article titled “Gardaland”.

On a snowy mid-February day the LEGO Club of Notre Dame and TEA@ND came together to design and build their very own LEGO theme park. The build lasted 15 hours and used over 25,000 pieces. A few pieces of media capturing the project are displayed here, but make sure to check out the Gallery for more pictures! In the fall of 2018, during one club meeting, members placed in groups were tasked with brainstorming a solution to the 2016 Disney Imaginations Competition prompt:

Design a traveling experience that will tour small towns across the United States so families who do not have the opportunity to travel to a Disney Park can have a Park experience. This temporary venue will operate in each community for two to three days, should take no more than a day to set up and break down, and embody the kind of family entertainment that Walt envisioned when he first built Disneyland.

The teams were given 15 minutes to put together their idea and a quick presentation. After developing their story to the best of their ability, the teams were given 2 minutes each to present. Below is one team presenting their initial concept for the prompt. Congratulations to Marissa Brennan and Margaret Swiecicki for winning the competition with their submission “Irish Crossroads”!

This year, our club is working on a yearlong project— an escape room. Bringing together all skill sets found in the club, we are in the process of planning and building an escape room. This project as well as many more in the future help members find hands on work that they can use to improve their skills leading to the themed industry. Having been invited to compete in Ryerson University’s design competition hosted at Universal in Orlando, Florida, TEA@ND gathered a team of 9 members and traveled south. We competed in 4 distinct challenges against 15 other universities and 120 students. In this, our first time attending RITDC, we placed 2nd in the Mechanical Design Challenge and team member, Mary Crawford, took 3rd in the Concept Art Challenge. After the weekend of competing, we traveled to the Orange County Convention Center for the IAAPA Expo (International Association of Amusement Parks and Attractions). IAAPA was an incredible opportunity for our members to learn more about the themed entertainment industry and to increase their professional networks. Later in the fall of 2019, our club traveled to Monticello, Indiana to attend Indiana Beach Boardwalk Resort. With a storm brewing, crowds were low and our team had a blast walking on to almost every ride with no line. From Steel Hawg  to the Lost Coaster of Superstition Mountain, we hit them all and snuck out just before the rain started to roll down! This semester, TEA@ND decided to kick off the year with a trip to Michigan’s Adventure! Welcoming back some of our old members and one of our new ones, the group spent the day catching up and going on plenty of coasters. In addition, four of the members decided to take on a new type of adventure that day: the Swan Boats! A beautiful way to see the park and its rides, it made the group think about even the little aspects of theme parks that make them truly memorable. In this last semester, the Spring of 2019, the club once again made its trip to Six Flags Great America. A beautiful day with low crowd levels, the group was able to manage, on average, a ride every 20 minutes! In addition to achieving this record, the group had a great time analyzing the strengths and weaknesses of various rides and thematic designs found throughout the park. By experiencing the customer side of themed entertainment, we hope to improve our members’ understanding of what customers value in this industry. In early February, four of our members traveled to Columbus, Ohio to participate in the first ever Students In Themed Entertainment (SITE) conference. They built outstanding connections with industry professionals and other students interested in the themed entertainment industry. TEA@ND looks forward to future TEA conferences which we can attend and learn from! This past fall semester, the Themed Entertainment Association at Notre Dame traveled to Cedar Point in Sandusky, Ohio. Members from the club learned a lot about the rides and history of Cedar Point sharing their knowledge with each other in a day of fun. Even with frigid rainy weather, fun was around every turn! In the spring of 2018, our club traveled to Gurnee, Illinois to attend Six Flags Great America. There are currently plans to continue these fun trips as well as to send members on trips to competitions and conferences around the United States. All of these immerse students in the field they love and help them develop stronger networks within those fields.

A pair of our members took a Saturday afternoon to do a little research and exploration regarding what the closest roller coaster to Notre Dame is. After a little google searching they found the answer on roller coaster database, a ride called Toboggan. Discovering that it lies only 13 miles from campus at a county park, they hopped in the car and drove down to check it out.

The story starts 40 years ago where the park operator had his employees build and install this all season rail run. However, as it was being built they struggled to find someone to insure the ride. Upon finishing it, the park director and construction manager gave it a ride (the car you rode in was simply a bucket!). On this very first ride they got thrown from the car going around a turn and tumbled into the woods. Thus, the decision was made to never operate the ride. Since then, the ride has been what is termed SBNO, standing but not operating, for its entire life. Regardless, it still stands 40 years later, on the eastern slope of Carlisle Hill, the second highest point in St. Joseph County, buried in the woods of northwest Indiana. Arriving at Bendix Woods County Park, they were overjoyed when they found out parking was free that day (as all college students would be). They left the car in a parking lot and trekked off into the woods. The day seemingly magically shifted from a cold, cloudy South Bend day to a warm fall day filled with sun. Wandering through the falling yellow leaves  of Northern Indiana’s woods, they came across all sorts of things of beauty from the beauty of birds chirping in the trees, to an abandoned sugar mill, and to at last, in the back of the park, Toboggan. This was the peak point of the day as all of the searching had come to fruition at last. At the very first glance from afar, the ride was a wonder. It lay, snaking along the golden floor half buried in the leaves falling from above. All along the track trees had both grown up through it and also fallen down upon it. The iron tracks had snapped in several places and even had sections cut out to allow nature trails to pass through. But that didn’t keep them from exploring the track. Most of the things discovered below are captured in picture more completely in the Gallery. The ride would have picked up speed descending what they estimated to be around a 60 degree angle at its steepest point. As the initial drop is coming down the hill the track banks left careening down the south side of Carlisle Hill. Here what is thought to have been a straightaway has taken on some large trees warping and snapping the track in several locations. Sadly, the ride hits a nature trail here and can be clearly seen that it was cleanly cut by a saw. However, tracing out the faint remains of the supports just peeking up past the carpet of leaves the ride seemed to trace out a fairly gentle curve here with the possibility of a run of unique turns. The track picks back up again at the north side of Carlisle Hill aimed back towards the station. Here is the steepest part of track which quickly plateaus just above the drop. This is the part of the ride that has also taken on the most new growth with trees sprouting up all throughout the space in the rails. This steep hill likely intended to send the riders back to where they came from leaving them settled at the end at the lowest point of the track. From there they likely would have manually pushed the car back up the hill for the next ride. As one can see, Toboggan has taken a beating yet doesn’t fall down. Its robust nature evidenced by its survival is a testament to the unknown company who designed and manufactured it, because even after all of these years, Toboggan stands as Notre Dame’s home coaster.