The study and research of fluid behavior and properties have been a challenging topic due to the invisible patterns of fluid (e.g., air, water). Flow visualization is used to make flow patterns visible so that we can visually acquire qualitative and quantitative flow information. A vector field (or flow field) is a mapping F(P)=V that assigns a vector V to each point P in the domain U. In reality, the domain U is a 3D space such as a rectilinear grid, which can be divided into evenly-sized cubes or voxels. The flow within the space can be represented by vectors. A vector (vx, vy, vz) is assigned to each voxel to indicate both direction and magnitude of the flow at the center of that voxel. Vectors that are not at voxel centers are linearly interpolated. In the 2D space, the domain U is represented by a 2D grid, and each cell of this grid is assigned a vector (vx, vy) that indicates both direction and magnitude of the flow at the center of that cell, as shown in the figure below. 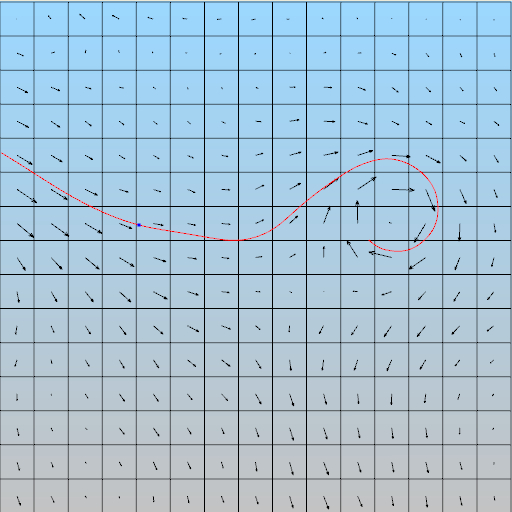 A 2D vector field and a streamline

A line integral convolution or (LIC) image uses a dense texture to depict the overview streamline patterns on a 2D flow data set or one slice of a 3D flow data set. It works by adding a random static pattern of black-and-white paint sources to visualize the flow field. As the flow passes by the sources each fluid particle picks up some of the source intensity. The result is a random striped texture where points along the same streamline tends to have similar intensities. 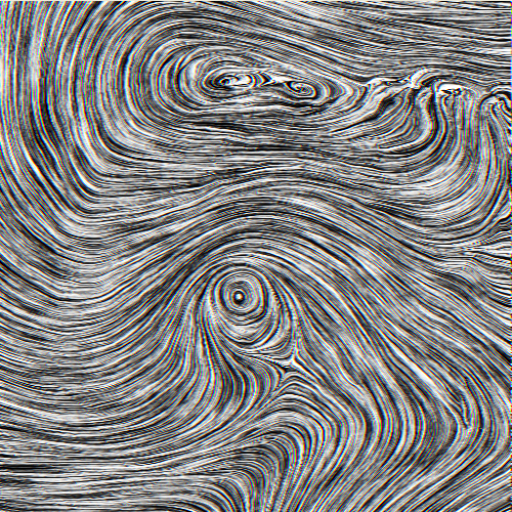 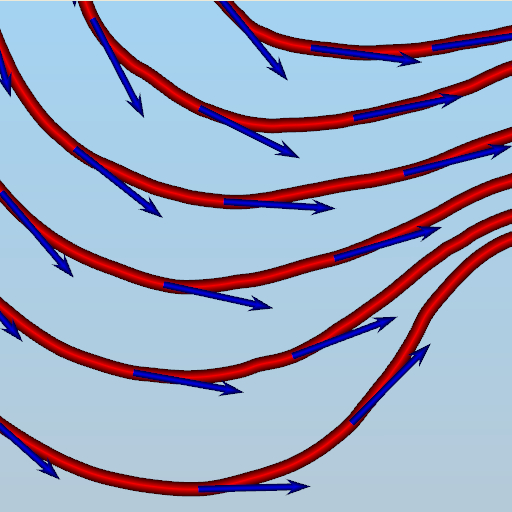 A pathline is the trajectory that an individual fluid particle will follow in an unsteady flow field, as shown in the figure below. The pathlines seeded from a rake are drawn in yellow while the underlying unsteady flow field is depicted using LIC textures. The concept of pathline is similar to that of streamline except that the underlying flow field is unsteady. Intuitively, if a small ball is placed into a water flow, and the water flow changes over time (i.e., an unsteady flow), the ball will follow the flow direction at each time step. In this case, the trajectory of the ball is a pathline.

A timeline is a line formed by a set of fluid particles that were marked at a previous instant in time, creating a curve that is displaced over time as the particles move. Intuitively, imagine that we place several small balls into a water flow, and allow the balls to follow the flow. At a certain time step, the path that connects all the balls is a timeline. As shown in the figure below, timelines are closely related to pathlines. In the figure, the pathlines are drawn in yellow while the timeline is drawn in purple. Given a set of pathlines traced from the same time step at different positions, connecting all the points at the same time step forms a timeline.

For a 3D flow field, there are five types of critical points: spiral, spiral saddle, saddle, source, and sink. The following figures illustrate the flow pattern around each type of these five critical points.

A stream surface is a continuous surface that is everywhere tangent to the vector it passes, which can be obtained from streamlines traced from a densely seeded curve.

The flow data used in this tutorial include a hurricane simulation data set and a synthesized five critical points data set. The hurricane simulation data set is made available through IEEE Visualization 2004 Contest. The five critical points data set is made available by Dr. Alex Pang via his IEEE Visualization 2005 paper Strategy for Seeding 3D Streamlines.