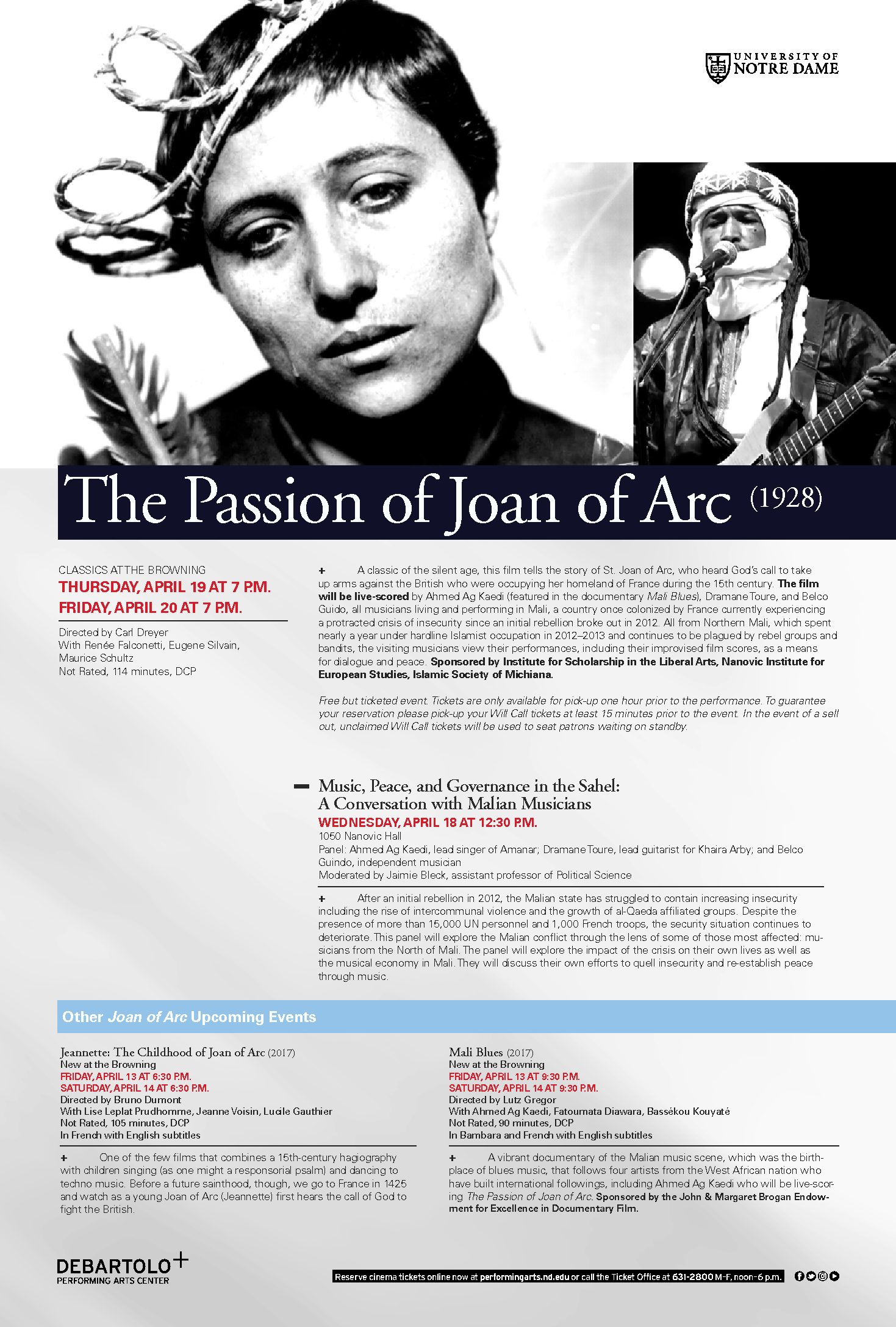 In April 2018, Ahmed Ag Kaedi, Dramane Toure, and Belco Guido (together as the group Amical Blues) traveled to the University of Notre Dame in South Bend, Indiana, from Mali. They stayed in residency for one week to create exciting new art, deliver lectures on current Malian culture and trends, and perform their music. It blew the roof off of campus.

For larger context, it helps to know from where Ahmed, Dramane, and Belco were physically coming. Mali, a poor, landlocked, Muslim-majority African country has long been known as a world music powerhouse and the cradle of American Blues music that maintains a fascinating relationship with European culture given its French colonial status. Since an initial rebellion broke out in 2012, Mali has experienced a protracted crisis of insecurity. Six years later, the Peace Process remains stalled and there is greater insecurity than ever, including the increasing presence of groups associated with Al-Qaeda. The visiting musicians are from Northern Mali, which spent nearly a year under hardline Islamist occupation in 2012-2013 and continues to be plagued by rebel groups and bandits.

For Malian musicians, the crisis has meant direct threats from various groups, the inability to perform in much of the country, as well as the cancellation of many festivals, which once brought scores of international tourists to the country. The three musicians in Amical Blues represent three distinct ethnic groups (Tuareg, Songhoy, and Dogon) from three different geographic regions who have very different experiences of the crisis. However, as musicians they have been committed to finding a peaceful resolution through music including through participation in the Peace Caravan – a traveling concert that encouraged cross cultural exchange and discussion to promote peace. Their visit highlighted their perceptions and lived experience as musicians living and working in Mali and how peacemaking is built into their craft.

The musicians attended multiple events created to mark their visit and to create dialogues. The musicians attended the Islam in Africa class led by Notre Dame History Professor Yancine Daddi Ayoun to offer perspectives on historical and current events in Mali and the broader Sahel. They also participated on a panel on Peace, Music, and Security in the Sahel moderated by Notre Dame Political Science Professor Jaimie Bleck. The event, which utilized Notre Dame students to translate between English and French, provided an overview of the Malian conflict and the role of music in contemporary Malian life. Historically, music plays an incredible role in Malian society and bridges connections between Mali’s highly diverse groups. In the context, Malian musicians have built on this foundation to foster inter-ethnic dialogue and to make appeals to peaceful resolutions of the crisis.  Each musician spoke about their unique experiences including how the crisis has shaped their own experience as a Malian musician, its impact on the musical economy, as well as their thoughts on Mali’s future moving forward.

The crown jewel during the visit was Amical Blues’ live score of Carl Dreyer’s silent film The Passion of Joan of Arc created alongside and performed with Notre Dame students Vinnie Birch (drums) and Patrick Kollman (saxophone). In both practicing for the performance and the performance itself, Amical Blues taught their new Notre Dame bandmates the musicians’ unique approaches to providing music for a film and collaborated with them during a set that is, by its nature, highly improvised. The group practiced throughout the week, creating a score, learning new rhythms, and analyzing the film they would be rearticulating through their new soundtrack.

Filmed in 1928 with a version that had not been censored by the government or the church unavailable until 1981, The Passion of Joan of Arc remains incredibly important as a filmic text, as a foundation of French cinema, as a study in theology in the cinema, as a watermark in silent film, and as a piece of film lore. That importance coupled with its dramatic reemergence in the 1980s (it was believed lost but located in a Norwegian mental hospital’s janitorial closet) made the film a common addition to silent film retrospectives since the 1980s, in particular. As a silent film exhibited in modern cinemas, it has held prominence within the modern live-scoring community—and for good reason. Its stark images, the inherent dramatics of Joan of Arc’s story, and the multiple traditions of music history that dovetail with hagiographies make for a rich film-going experience.

Even though a popular film to live-score, the Amical Blues score at Notre Dame had a unique richness. By bringing African musicians from a region the French colonized, Joan of Arc’s story of battling British oppressive regimes reemerges for new analysis given the opportunity for Malians to reframe the story through music. Further, Ahmed’s personal history in music touches upon the fervor of the religiously motivated soldier as he suffered religious persecution by Al-Qaeda forces, who burned his musical instruments, which he still describes describes as his weapons of peace. Amical Blues’ personal storylines with French colonialism and religious fervor aside, the Malian music that played during their live-scoring, rarely heard in South Bend or by Notre Dame students, was an astounding complement to Dreyer’s film. The Amical Blues Joan of Arc Live Score is amazing music in its own right. Its combination with the film creates an experience that is much greater than its two parts. Please give it a listen and read more about you can download the music so that you, too, can experience it in tandem with the film.