To be fair, I only speak one language unless you count programming languages.

Skype can do real time translation of 4 spoken languages including English, Spanish, Italian and Mandarin. It can translate typed content in real time from a total of 50 languages. Including Klingon. No word on whether Dothraki or high Valyrian are in development.

I’m pretty amazed by the implications this could have for opening up communication on a more global basis. Of course speech translation is also only as good as speech transcription.

For now, this is also limited to Windows 8.1 and Windows 10. No word on availability for other platforms like iOS or OS X.

Ars Technica has a short review of the new Intel Compute Stick. One of my colleagues wondered whether this could be used for wireless projection in the classroom. We’re constantly looking at new products to enable that functionality. I thought it was possible but I had some thoughts and questions.

One of the problems we’ve seen is the fact that very few of these types of devices are cross platform. Since we have no idea what products people might try to use in these rooms, do we support most, all or none? This would work great for newer Windows computers, but almost nothing else. Might not even work with Windows 7 machines.

There’s no silver bullet that solves all the OS’s and devices that might be used in a classroom. The Crestron Air Media solves some of the network complexity by pointing people to a URL but it doesn’t do the same thing as Airplay. It can’t mirror a screen or show a video unless it’s local on the Apple device. When you’re mirroring your screen, there’s also a slight delay and the frame rate isn’t fluid.

I think the best solution I’ve seen Airserver. It’s essentially a software based AppleTV. They have both Apple and PC versions of the software. The PC version supports AirPlay and MiraCast. Theoretically we could install this on the Windows computer in the classroom and allow Apple devices, Windows computers and Android 4.2 or higher devices to wirelessly project. That’s like 99% of what we want to do.

Of course we’d still have to figure out the networking issue. Our network does route broadcast traffic like Bonjour so there’s no way for the device to know that there’s an AppleTV available. Unless we poke a bunch of holes in the firewalls between the zones. That’s going to be hard due to the InfoSec analysis and the networking time involved. Or we could put both devices (Local PC and guest device) on the guest wireless network. Of course if we do that, then the local PC can’t connect to many network services or log on to the domain. But hey! We’d be able to project wirelessly! And that’s the goal.

I totally can see this being used for digital signage though…

A blog post on Profhacker introduced me to this tool and I have to say it’s pretty useful. Share URLs Quickly with ShoutKey

If you’ve ever been in a group or a meeting and needed to share a link quickly, you could email it but you have to copy the link, find everybody’s email address and then send it. Then everyone has to go to their email to get the link. A few extra steps. It would be easiest of you could just say it. Good luck doing that with something like bit.ly or tinyurl. 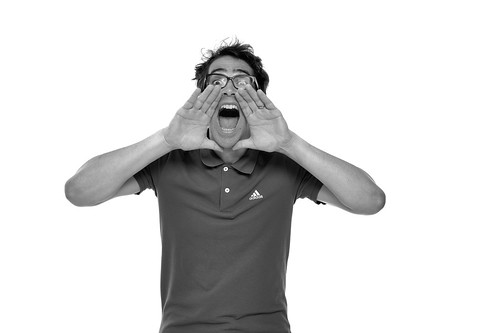 Shoutkey  allows you to create a short URL that will only work for between 5 minutes and 24 hours and is easily transferrable by speaking. It winds up being in the format of shoutkey.com/XXXXX where XXXXX is a random word.

This isn’t good for secure or private links but if you just stumbled on a site that you want to share with a group, I think it’s easily the most efficient way of doing it.

A few months ago the DDMC at Duke took a look at a glasses free 3D display from IZON. They were extremely impressed by it. IZON was on their way to the NAB show in Vegas and they were nice enough to stop here on campus to demo their displays.

They brought 2 displays with them to demonstrate how it could be used either for digital signage or with more traditional content. We had quite a few people show up to look at the displays and the general consensus was that the tech was pretty impressive.

IZON has been doing 3D conversions and content creation for the film industry for quite a few years. In fact they have created their own software to do 3D conversions. What they have done is take that software, and put it on a chip that can be installed in displays. They use a lenticular lens on the front of the display that can be tweaked with the chip to work most effectively at certain distances. (The default is 9 – 12 feet.) IZON buys the 4K panels from a large OEM and assembles the displays themselves in Florida.

As you move around the room, the intensity of the effect changes. (If you ‘re looking at the display while you’re moving, the effect can be a bit disorienting.) The viewing angles are very impressive. As you move from 90° from the display towards the side, the effect gradually diminishes until you get to about a 25° degree angle. Then it just stops. You’re not left with a blurry and unwatchable picture though. It’s now just a 2D image that still looks as good as most displays at that angle.

The process couldn’t be easier. Any 3D content (DVD, Blu-Ray, 3D-Camcorder, etc) that you feed into the display is processed in real time and the effect is impressive. If you give it normal 2D content, you just get 2D content as you would expect.

A few observations about each application:

We had one person from Architecture that really wanted to view some of their 3D renderings on the display. We tried on both a MacBook Pro and a Lenovo laptop to get this working but were unable to figure it out. Basically you have to get the computer to output content in side by side mode and we couldn’t figure that out on either system. Not all video cards and drivers are capable of doing this and laptops are probably the least likely to be able to do so. I’m sure a nice desktop video card could do this easily.

It wasn’t hard to think of a few ways that these displays could be used on campus.

The two biggest things standing in the way of this technology aren’t new. Content and price.

Content: Where do you get 3D content? Sure you can get a lot of movies in 3D but once you expand beyond that, your options shrink. ESPN-3D is shut down for the time being. This would be amazing for digital signage but you’d have to have someone make the content for you. I’m sure there’s no shortage of places that do this, including IZON themselves, but how much will it cost you to have it produced? The inability to use it in portrait mode is also limiting. They’re working on this but they have a long list of other things to work on as well.

Price: The list price on a 50″ unit is over double what you would pay for 4K 3D TV that requires glasses. Later this year they will be shipping a 65″. Considering the capabilities of these units (3D and 4K capable) the prices aren’t horrendous.  10 years ago a 50″ plasma would have cost you about the same. I’m sure as production increases, competitors emerge, and licensing deals are struck, prices will drop quickly.

This isn’t for everyone. Certainly not in academia. But if you want to have a group discussion and display content in 3D, right now you really don’t have any good options. Unless you’re happy with everyone wearing glasses or an Oculus Rift. With one of these displays, it’s very doable. I can definitely see one of these in an architect or engineer’s office or conference room.

I have to say that the most drool worthy thing I saw was their pre-production 3D tablet. (They were carrying it in a Pelican hard shell case and bubble wrap.) It’s a 10″ Android unit and the effect was amazing. They played a movie clip with some of the head’s up display from Ironman and… WHOA!!! It is truly Tony Stark’s tablet. Jaw droppingly awesome.

Many thanks to IZON for making the trip and showing us what’s just beyond the horizon!

Amazon has offered AWS workspaces for about a year. Virtualized Desktop Interface. Think of it as a Citrix VM hosted on Amazon. Essentially it’s your desktop OS, but hosted elsewhere so you can access it from anywhere. When I first heard about this it immediately got me thinking about whether it’s possible to use this for classrooms and computer labs. You’re obviously still going to need some sort of thin client to access the cloud, but you’d essentially be done replacing the desktop every 4-5 years.

What Amazon is doing is actually pretty neat. The apps themselves are also virtualized, not just installed on the VMs that are deployed. When an app is patched, it happens in one location, not hundreds. No idea whether you can push down or tweak all the settings that prevent annoying nag screens, or settings specific to your environment.

Of course the licensing on this is still a bag of suck. $25/month for Windows plus $15/month for Office. Add into that the fact that much of the software that are used in classes have licenses that expressly forbid virtualization.  Once those concerns are dealt with, I can easily see a scenario in which students just use their laptops to access a VM environment that we pay to maintain. True BYOD. No computer labs full of machines sitting idle for hours.

Back of the envelope calculations here:

Add in the costs to actually image the computer every year, figure at least an hour, plus the purchase price of around $1000 for monitor and installation, you’re looking at around $1300 for 4 years or $325/year. Licensing alone for the Amazon stuff starts at $480/year. I’m sure there’s an EDU discount but still, the math doesn’t work yet.

I long for the day though…