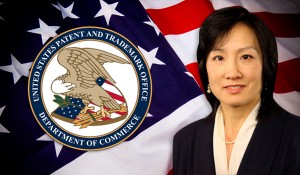 USPTO Director Michelle K. Lee, the first female to be elected for the position, was appointed by President Barack Obama in 2014

As a starting note: this blog post is more of an opinion piece, and reflects my experiences and the summation of what I’ve learned from the perspective of a woman entering the field of patent law. While mostly positive, my experiences may not be identical to those of other women. This is simply one perspective.

Many people, both men and women, cringe at the mention of ‘feminism’. However, equality between the sexes is an important topic to contemplate in all aspects of life. I’m not writing this article to put down or offend men in patent law, or in general. I would just like to point out that, for the time being, patent law is a field dominated by men. It’s a simple fact. In the last few years, only about 1 in 4 newly admitted practitioners to practice patent law before the USPTO were female (Kahler, 2013). This is highly influenced by the imbalanced ratio of men to women who have the technical background to sit the patent bar. If you would like to read more about this, please read the following Law 360 article and Intellectual Asset Management article. As a biologist, nothing makes me happier than to see a growing number of young women enter the STEM fields, of which I consider patent law to be included. Although a change is occurring, patent law is still basically a “boys’ club”.

This year’s MSPL cohort consisted of ten students, seven of whom are female. Although we experience different perspectives due to our diverse backgrounds, we noted several times this year that there has been a distinct shortage of women patent practitioners amongst the many guest speakers and hosts that we had the pleasure of meeting. When we did have female guests, they would often marvel at how many women were in the program, and they would speak with excitement and encouragement in telling us that we have made a great choice in entering the field. As much as we appreciated and enjoyed ALL of our guest speakers and hosts throughout the year, we were always really excited to speak with other women practitioners and hear their stories.

However, going beyond the smaller numbers of women in patent law, mindset is very important. As discussed in the above referenced Intellectual Asset Management article, Howrey Women’s Leadership Initiative associate Alyson Barker made a statement about how making sure women are treated as equals is more important than having equal numbers (2008). I feel as though this is the bigger challenge for women in IP careers. I once spoke with a female guest speaker after one of the MSPL lunch and learns, and she verified that being female in the field of IP will bring some challenges. She also touched on the idea that the struggle is not necessarily finding a job as much as being viewed as an equal and making your way up the ladder to the point where you get to call some of the shots.

This is exactly why it is important for new female patent agents and those considering the field to meet and be in contact with other female patent agents and attorneys. With solidarity, women in patent law can support each other and achieve higher. At least for myself and a few of the other women currently in the program, interacting with other women in the field that we’re entering not only gave us realistic insight into what it’s like to be a woman in patent law, but it quells some of the internal questions of “Can I attain a successful career?” and “Will I be taken seriously?”. In establishing a bigger presence of women in the field and forming a larger network of women in patent law, I believe that women will begin to fill more of the higher job positions and break through some of the barriers that are holding them back.

As a feminist, of course I plan on advocating for more girls and young women to pursue degrees in the STEM fields and join the realm of patent law, as well as promote equality between the sexes in the existing IP workforce. I believe that the field will benefit from both an increased presence of women and the equal influence of men and women in the future of IP. I think that together, we can work towards resolving some of the caveats that exist in the patenting system. I also believe that USPTO Director Michelle Lee will make a huge impact on patent law during her career, as she works to better the quality of issued patents to assist in stifling patent trolls. Not to mention, right here at Notre Dame, all MSPL students and alumni have been lucky enough to have Karen Deak direct the program and support us throughout the nascence of our careers. The MSPL is a great program that would not exist without Karen, and I have her to thank for enthusiastically encouraging me to join the program from first introduction.

Don’t get me wrong: I still expect to face some adversity in my career. Although I’ve been pleasantly surprised so far with the respect that my opinions have generally been given, I’ve still experienced a few bumps. Sometimes my opinion is dismissed, and many times I have been cut off while speaking. I’m not always treated as though I know what I’m talking about. Maybe this is because I’m a woman, or because of my lack of hard experience in the field, or because of my educational background. Regardless, I expect to have to fight to be respected going forward. I fully intend on being myself and unabashedly standing by my opinions. Although remaining a humble person and learning from those both above and below you are important skills, I plan on respectfully asserting my intelligence and will push to be treated as an equal. As a final note, I want to share that ‘feminism’ is listed as a personal interest on my resume. I most definitely encourage other feminists (both male and female) to do the same. It’s definitely a point for conservation, as a few recruiters and employers have told me that it caught their eye while looking over my background. Not to mention: it’s an opportunity to support the equality of men and women in the IP workforce!