I thought this article was interesting, and It definitely comports with the idea we discussed week 1.  The typical entrepreneur is not a hotshot 22 year-old!

As to means, these researchers believe that the proliferation of cheap and accessible technology provides us with ample means for an entrepreneurial society. Id. For example, a freelance worker needs only “an internet connection and a service to sell,” and a taxi driver needs only “a car and a GPS.” Id. As for motive, drawing on Maslow’s hierarchy of needs, they posit that the post-Industrial Revolution era led to salaried jobs, which allowed many to stop worrying about many of the lower rungs, and to focus on self-actualization–the top of the pyramid. Id.

Finally, as to opportunity, they offer that “[n]ew technologies and economic and social changes have opened up vast new opportunity areas,” and that the “social acceptance of entrepreneurship has also improved.” However, they also note that entrepreneurs are subject to many obstacles, such as employment law, intellectual property rules, and the like, noting that “the institutions that govern capitalism are still stuck in the late 19th century.” Id.

Is this a good thing? From the point of view of a single entrepreneur trying to put their new company on a rocket-ship trajectory, probably not. However, from a macro societal perspective, it is not so clear. Our system of law and regulation has almost always lagged behind the marketplace and technological developments by years, if not decades. Although this may frustrate some, it is a natural byproduct of at least two aspects of our system. First, our tripartite representative republic ensures that powers are separated–an important safeguard, but one that, of course, sacrifices some efficiency in search of protection against unlimited power in one man’s hands. Second, our common law roots means that our judicial doctrines develop gradually and over time. Although these two aspects may frustrate some entrepreneurs, and although they are not perfect, it seems unlikely that anyone would be willing to abandon them in search of a perfectly and instantly reactive system of governance. (Which comes with its own series of unintended consequences). Improvements can certainly be made, but they too will come gradually.

Thought I would share this article that I read a little while back about the intersection of lawyers and the start-up community. It discusses why both sides might be averse to pairing up with the other (“the risk-averse attorney may be leery of the often unstructured, right-brained world of tech startups. Indeed, tech entrepreneurs are probably just as off-put by the idea of a lawyer hanging around their office cramping their style.”)

Interesting commentary about how the two can join forces for common benefit. “[A] lawyer on the early team can contribute to a thriving company culture by asking the right questions at the right times, providing perspective on crucial transactions, and getting smart fast on issues where the rest of the team lacks expertise.”

Kevin O’Leary (aka “Mr. Wonderful”) from the show Shark Tank spoke at Notre Dame’s Mendoza School of Business last night about entrepreneurship.  I was wondering if anyone was able to attend and would like to discuss the points of his speech.

Interesting article about President Trump’s recent executive order aimed at easing federal regulations, with the hope that less regulation makes the entrepreneurial market more accessible. The order mandates that for each new agency regulation created, two must be destroyed. Actual statistics from the Department of Labor on the number of new businesses created indicate that despite these perceived barriers to entry, new business creation in the United States has been steadily increasing since the Great Recession of 2008.

It was fascinating the article noted that the idea that regulation inhibits business creation is hard to quantify. Last week in class, we discussed some of the qualities that make-up entrepreneurs. I think some of those attributes; like confidence and self-efficacy are things that no amount of regulation will deter. It seems that striking the correct balance between regulatory oversight and unfettered creation is difficult. I am curious to see whether easing some of these regulatory burdens actually spurns entrepreneurship, or if it creates more problems because Big Brother is no longer watching as closely.

Interesting article. This is a new style of entrepreneurship that recognizes that consumers, and mainly millennials, are more interested in the story behind a product than the product itself.

I found “The Process of Creative Destruction” chapter by Schumpeter to be fairly thought-provoking, particularly the notion that capitalism is not static but rather is an ever-changing process. Since it was heavily theoretical, I thought his hypothetical regarding the retail stores at the end of the chapter really crystallized the process he was discussing. This NYT article gives a real life example of that hypothetical, and delves further into some of the problems and possible solutions:
https://www.nytimes.com/2017/01/12/business/economy/amazon-jobs-retail.html?_r=0

As we discuss public policy in class, I think this passage will be of value:

“One place to start, Mr. Katz said, would be for the government to provide more funding for retraining and also develop a wage insurance program to cover differences in salaries as workers migrate to new, lower-paid jobs from disappearing, higher-paid ones.

“The economy as a whole gains from creative destruction, but we don’t put many resources into training displaced workers,” he added. “That’s a real problem, and in practice, we need to do much more.”” … but it does raise some interesting questions about the way technology is designed, how we use it, and how much say we (as users) have in the entire process. Here is a quote from the article:

“Right now, Apple, Google and Facebook are kind of like these private companies who, collectively, are the urban planners for a billion people’s attentional landscape,” Harris said. “We all live in this invisible city, which they created. Unlike a democracy, where you can have some civic representation and you could say, ‘Who’s the mayor?’ or, ‘Should there be a stoplight there?’, we don’t have any representation except if we don’t use the product or don’t buy it,” he added. “And that’s not really representation.”

As we delved into discussion about what makes someone an entrepreneur, I immediately thought about the differences between contemporary entrepreneurs and those from the past 30 years. Although the greats, Apple & Microsoft as an example, also started out as startups, millennials seem even more inclined to leave their steady job and begin a startup company.

This article highlighted the questions that entrepreneurs should ask before beginning a startup company. As touched upon in class, the amount of work/effort that is necessary in operating a business is much higher than being an employee. This article notes the need of being completely committed to the business, which still will not guarantee success.

This past Friday, I attended a talk at the Business School entitled “Social Enterprise for Four Changes” by Matt Manos, the founder of verynice. Verynice is a design firm committed to social impact, as indicated by their steadfast commitment to giving away 50% of its work for free, as pro bono design work. Mr. Manos has also become something of a pro bono researcher and expert, and has compiled an overview of several dozen different models (aside from the 50% model) that social-impact conscious companies have successfully implemented.

I found this talk to be relevant to our class for two different reasons. First, as future entrepreneurs or legal counsel to entrepreneurs, we may be called upon to design a framework for social giving–be it in-kind, percentage of revenue, etc. Thus, it makes sense for us to study and look to best practices. (If you are interested in learning more about the give half model, click here, and for an excerpt from Mr. Manos’s talk about the other models, click here).

Second, even if we enter the traditional legal workforce and do not work directly with entrepreneurs, we have a professional obligation to render pro bono services. See ABA Model Rule 6.1. It is helpful to think about how non-legal businesses undergo pro bono work so that we can perhaps import some of these strategies into our future practices. 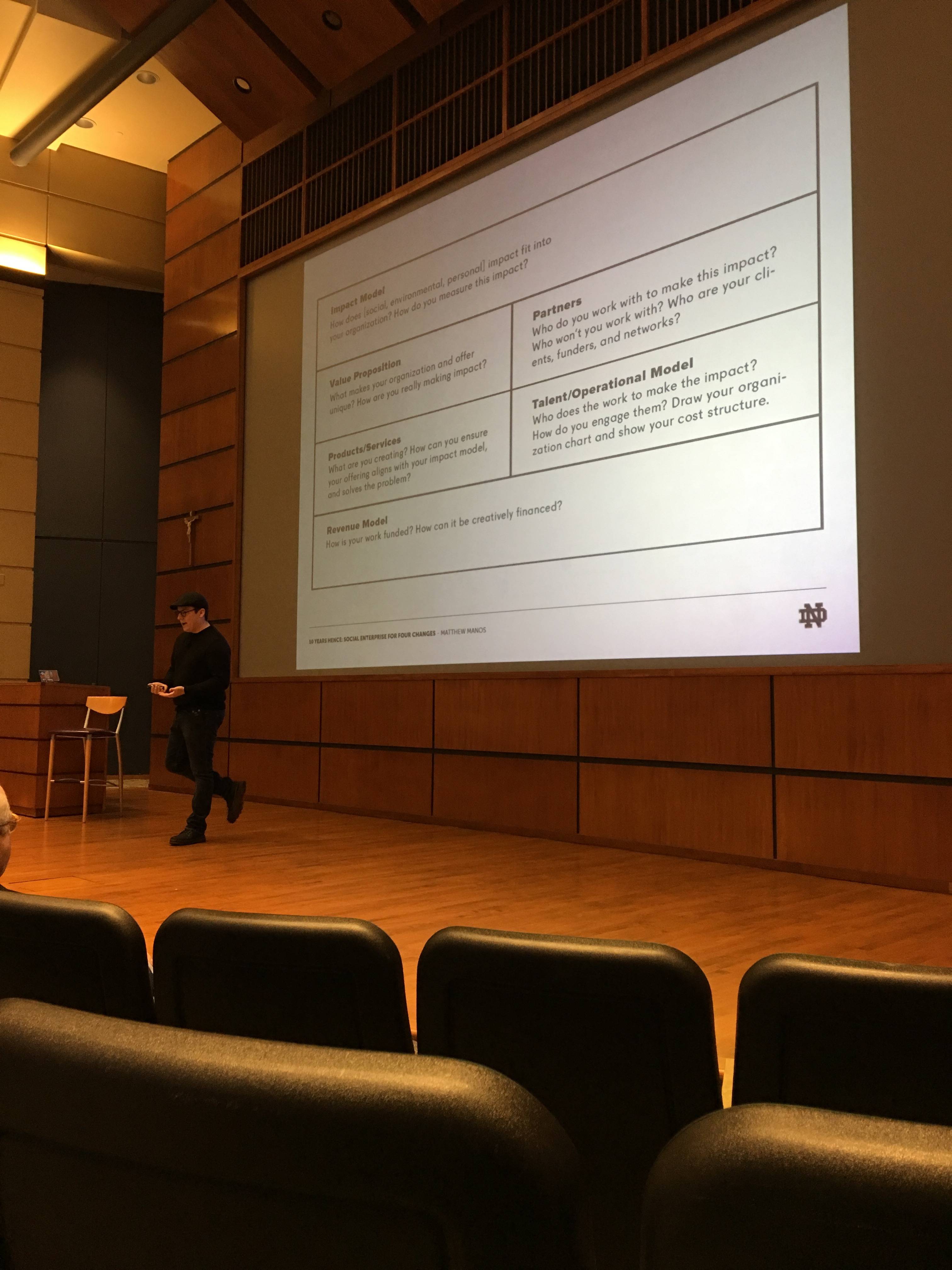