All sorts of developments in the last few days, on and off the AFTLS beaten track: not least is that we’ve opened Hamlet at last and, by God, we’ve done it in the sultry February heat of the Lone Star State, the strange and exotic planet that’s Texas.

We had an audience pushing 600 on opening night in the Rudder Theatre and a healthy standing ovation. It pushed 700 the second night and a flurry of students that we’d taught during the week came up onto stage for autographs, chats and all smiling – we felt relieved and that the show had been appreciated – enjoyed even! – and over a slap-up dinner in Café Eccel thanks to Kirstin, our Texas A&M producer, she admitted that on the back of the show and audience turnout she’ll be inviting AFTLS back to the university next year. “Only 3 walkouts, I’m telling ya’ that’s a triumph!”

Some smaller classes this week, thrown in with the crowd-management variety in the lecture halls, but they were all satisfying. We tried getting the students doing some physical tableaus alongside Gertrude’s ‘willow’ speech: one person speaks the speech, one molds and one is the clay, and by the end of the class, when prompted, ‘So, what can you remember now that we’ve taken back the scripts?’ there was a flood of recall and Gertrude’s speech almost entirely reconstituted itself from all the corners of the room! Terry used his ‘good/bad angel’ technique for cracking open ‘To be or not to be’, we had them cantering about with iambic pentameter and had some fun with the Ghost scene as the students experimented with the spatial relationship between Hamlet and the old ghoul to make the scene as dramatic as possible.

What is hairy, and also very exciting, about this tour is the amount of time we have between shows and hence the job of keeping what’s a very substantial play in performable shape. We worked our way into a crescendo at Notre Dame – our ‘final’ week’s rehearsal culminating in the run in front of the faculty. The following day was a tech in Washington Hall and then, tantalizingly, just as you would normally expect to kick off into an opening night, and just as we’d fallen in love with that stage – we fly off, land and spend several days out of a theatre space and limited to going through the lines in our hotel rooms. Then as opening night suddenly arrives, we have to urgently lift the thing back into the shape it was in when we left off in the course of a single tech session. It’s a most irregular way of performing a play as big as this one – I think if we’d had a chance to ‘run it in’, it would be slightly less hairy – but, hey ho, this way of working brings positive possibilities, too: even as our hair stands on end at the thought of another show the other side of 6 days off (gulp!), we’ll certainly be able to keep it ‘in the moment’ and, um, as you might say, ‘fresh’.

But back to Texas: We like the big sky here and the evening light. We’ve enjoyed floating about in our Mo Fo white tank of a car, our first dally into the massive HEB supermarket, nodding donkeys, Stetsons, the accent, the temperature, some excellent TexMex, hanging out in Austin, driving through the landscape, surviving our first two shows, the military cadet uniforms, their gun-spinning skills on the campus greens, grackles making a right racket in the Austin trees, the Capitol building’s State rooms and staircases, Lone Star beer, horses, cattle….here’s wishin’ we could head on out to Hill Country, meet some cowboys, head right off the beaten track. 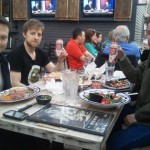 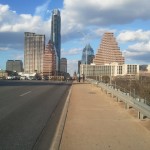 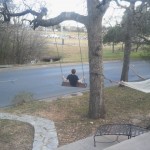 Charlie on a swing 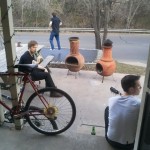 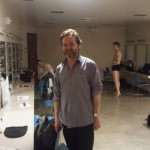 the hours before opening night… 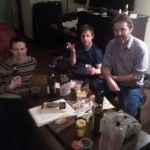 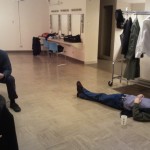 The Dressing Room at the Rudder Theatre 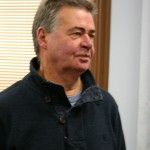 Highlights and lowlights from the team in an attempt to scour every nook and cranny of the adventure:

Andrew: Highlight – 1. spotting small, horse-herding boy in a field by the freeway en route to Austin. The little boy waved his small white Stetson round and round, got the horses into a gallop then stopped, put it back on and walked back in the other direction. 2. Finding excellent croissants in the Whole Food emporium, Austin. (he bought ‘em back for his grateful colleagues).

I should mention at this point – four of us , let’s call us Claudius, Gertrude, Hamlet and Rozencrantz – we shot off to Austin our day off. Andrew managed to find us a so-called ‘Air B & B’ – which turned out to be long, blond haired Aaron’s comfortable free-spirited bungalow on the outskirts of Austin – we had a porch which gave onto a slope with a trampoline, a swing and a hammock – all be it overlooking what the freeway. Traffic noise aside, we all landed here and stared happily at the sky. It was a relief to sit on a stoop – there was a rocking chair – and relax and let Hamlet slide out of our veins for a day and a night.

Andrew’s lowlight: swallowing the prong of a plastic fork and thereby risking multiple internal ruptures. (By Sunday brunch in Austin we had all but eliminated this worst-case scenario and his pizza seemed to slide down uninterrupted).

A visit to Austin’s Capitol building. On the eve of our departure back up to Indiana and freezing temperatures, we loafed about the park in Spring-like sunshine, a terrific statue of a cowboy and his horse in full bucking throes, and into the building – the House of Representatives and the House of Congress – two bright and majestic rooms, none of the pomposity of the English Parliament – comfortable and democratic and elegant were words we found. Huge oil paiting of the surrender of Santa Anna in all its full-blown propaganda glory.

Terry, meanwhile, had a gentle and different sort of meditative weekend, walking the local-to-College-Station Lick Creek Country Park. He spotted Scarlet Tanagers and heard bullfrogs. Cardinals, too, of course. His highlight was Washington-on-Braxos and this airey house where the ladies once sat out on the porch sewing detailed cotton embroidered bonnets and all sorts of pretty things.

Terry’s lowlight was launching a Cajun chicken mistakenly across the floor of HEB supermarket. It slid several yards across the floor after he upended it, apparently. The good news is that, chickens akimbo, he nevertheless bumped into a parent of one of the students at Texas A & M who told him, “ You’ve turned my 12 year old onto Shakespeare!”.

Charlie’s highlight was the Austin hammock and swing. I attach a photo. Therein you see a man relaxing. He also enjoyed our Irish coffee in Austin’s Driskill Hotel. We couldn’t help ourselves. It was wonderfully grand, all marble pillars and high ceilings and shining stone floors and magnificent architectural comfort, mind you we marched through the grand hall and into the bar at the back to find a full-blown country concert with fiddle and Stetsons – and luxuriant, generous American leather furnishings, paintings and bison’s horns and decided we’d never find anywhere in England so welcoming and relaxed.

Charlie’s lowlight was getting pulled over by the police because our hire car didn’t have a front license plate. (Actually, he admits it was rather fun). The policeman was very friendly, explained that State rules in Texas are different to elsewhere regarding license plates and didn’t book us. We nodded, said we were ‘terribly sorry’ and were absolutely thrilled.

Pete, alas, is still searching for a decent Mohito but admits to getting nearer. His highlight was setting off from our freeway bound bungalow – for a morning run – along the Townlake trail to Austin and merging with crowds of likeminded Texan joggers along the way.

Shuna’s got a few things to add to our AFTLS Nature Notes:

Grackles we all discovered shrieking in the trees of Austin. Also she noticed bright orange and yellow butterflies flitting about when we went up a rocky outcrop by the Colorado River and surveyed the view of the city. Also, she’s been looking at all the beautiful, gnarled species of Oak Trees that cover the Texas landscape. Various big hawks with white heads – we need Terry to tell us.

Meanwhile, we’re newly landed in Valparaiso and a lovely welcome – a so-called ‘coloquium’ with the students this evening, a kind of Q & A about the acting profession and our own particular trails into it. Snow and longjohns again. All sorts of classes ahead this week, we’ll be pulled away from Shakespeare to eg. Paula Vogel’s ‘ How I learned to Drive’ and some scene work with students who are already some way into their rehearsal process.

Thanks to Jessica and Mike for seeing us off at Houston – and to Jessica for all her hard work in accommodating us in College Station.

Lee, Andy, Alan and Betsy have given us a warm landing in Valpo and are as keen as we are for a fulfilling week ahead.

Pretty, brick buildings downtown here where we spent the evening chewing the fat with this close-knit and passionate Theatre Faculty over Guinness, Merlot and Jameson and a really good Gumbo. Brave driving from Lee in getting us out of a snow drift earlier to hit the pub. The Dance Ensemble and Bach’s Mass in B Minor are all abroad in the theatres so Hamlet has been valiantly slotted into a height of semester hive of activity. We look forward to working amongst it all. – Shuna