The snow still falls in South Bend, but our trail to Washington Hall is now very well trodden indeed and yesterday, the culmination of our American week’s rehearsal with our first preview. It seems to the five of us that we’ve been swimming in and out of the thousands of lines of Hamlet for, well, months – when, in fact, we first embarked on Act 1 Scene 1 in mid December. So, it was an important moment to reach, our first performance this side of the pond, in front of our small but erudite audience, the various Notre Dame officials of AFTLS, the gatekeepers, you could say, of the whole project.

It was good, too, to feel the first pump of adrenalin sliding through our veins: we’ve had the play to ourselves and with no director’s guiding eye for so long, and suddenly a row of beady of eyes confronts us and the back stiffens, the throat constricts, the hair practically stands on end – and we’re off! As Pete mentioned, who plays Hamlet, (the longest part in Shakespeare), the play is mighty and inexorable, and one has to steel one’s self at the start for the mountain climb of it, but ‘once you’re in you’re in’ and it carries you forward in the swirls of its language.

Well, a bit of fluffing here and there, the odd chair out of place, the odd breathless entrance – ‘ Heck, we’re here already!’ – but on the whole we were pleased, we’d held it together and, all of us feel that it has its fine moments and the story, at the very least, is unfolding clearly.

Into a circle for a session of notes with Peter Holland, one of the world’s Shakespeare experts and a man whose words are going to be vital and fascinating to take into account. He was gentle with us and gave us all sorts of useful technical and artistic advice. If there were time, I found myself thinking, how interesting it would be to quiz him on so many questions about the play. You could do Hamlet for a lifetime and never get to the end of searching.

Today, we move forward another step and take our pint-sized production (it all fits into a large wheelie suitcase, plus an umbrella, a violin and a ukulele) into the main theatre at Washington Hall for the tech. It’s an absolute beauty – we had a look at the stage on our arrival – and there’ll be a certain amount of adjustment to be made. The theatre has a magnificently generous wide sweep of a forestage, and we’ll be trying to bring ourselves downstage to use it as much as possible. The other luxury is that the entire lip of the stage sinks in steps down into the auditorium, making interplay between the two irresistible – we’ll be sending Hamlet out front on several occasions.
One big question is can we achieve an effective blackout for the opening scene on the battlements without all falling head over heels? Will our little torches adequately light the faces of Barnardo, Francisco and Marcellus (the soldiers, guarding the castle in the dead of night) so that the audience can see them?

Our stage manager, Ryan, has been a tower of strength and at great pains to help at all times. Being Brits, unused to snow and salt, we gaily march all over the rehearsal room floor in our boots so that it has gradually accumulated layers of footprint marks and a distinctly crunchy texture. Ryan went into action and mopped the place from pillar to post, so that by the time our guest audience arrived the place gleamed. He’s been sent out for the said torches (our cheap British ones were all completely inert) and has very probably saved the day by coming up with LED beams to give the torch light a bit of welly. Another triumph has been Debra’s careful anticipation of Social Security delays. Somehow she managed to visit the office in advance, what she said and who she met is a mystery but our visit there was the swiftest in and out you could imagine. Forms and smiles were handed out in minutes and we were back at the coal face before 11am.

Here are some highlights and lowlights of the week so far:

Terry (the distinguished senior member of our crew, plays Polonius, Osric, the gravedigger, Marcellus and a coupla sea captains): Highlight – Ryan cleaning the rehearsal room floor. Lowlight – the note session at the end of our preview

Andrew (Laertes, Horatio, Rozencrantz and Guildenstern, Lucianus): Highlight – discovering the ‘very Catholic selection’ of books available to guests in the hotel lobby, particularly the complete Sherlock Holmes. Lowlight – being robbed of $10 in the 7-11 store

Shuna (Gertrude, Ophelia): Highlight – walking through the snow in front of the Basilica on the very sunny day. Lowlight – not having the self discipline night after night to get to the swimming pool and drinking Vodka martinis instead.

Ryan (our stage manager): Highlight – meeting the AFTLS actors, watching the process of character development in rehearsals ( both actors and roles?!). Lowlight – Getting the actors’ hirecar out of Hock. It was going to be towed away and Ryan actually went into battle on our behalf – drove his van so it blocked the tow guys truck and called the authorities til they gave the command to leave our car alone. 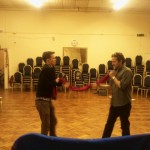 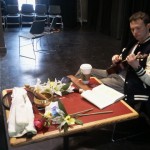 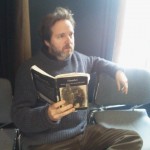 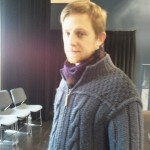 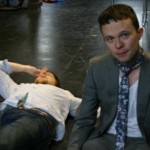 The cast is well into rehearsals in London. The Shakespeare at Notre Dame staff met yesterday and finalized the itinerary for the upcoming tour. We will be working on bringing you some stories from the tour as we progress. The actors will be arriving in South Bend January 19th, so I hope to have you hear from them shortly after that! Happy New Year!