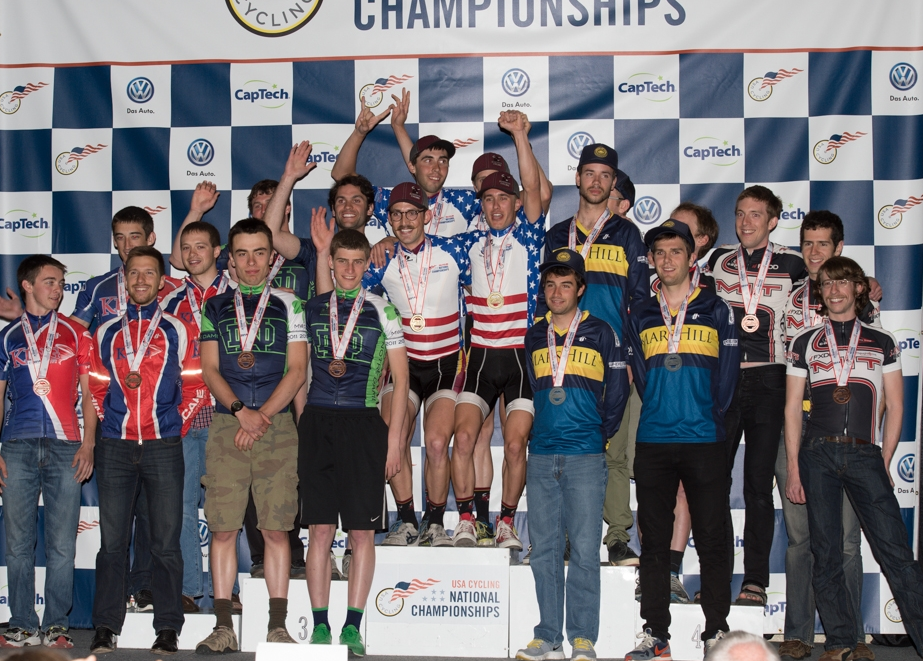 Notre Dame Cycling sent Andrew O’Donnell (Grad.), John Pratt (Jr.), Jim Snitzer (Jr.), and Luke Tilmans (Sr.) to the 2014 CapTech USA Cycling Collegiate Road National Championships on May 2-4. The event was held in Richmond, VA and served as a test event for the UCI Road World Championships that will come to the city in September of 2015. The collegiate courses were identical to those that will be used in the World Championships and showcased historic parts of Richmond, including Monument Street, Broad Street, and Libby Hill.

The team and individual time trials were held on the first day of racing, Friday, May 2. Despite a crash during warmup for the TTT, the 4 Irish riders paced well and finished the 31km course in 43:12. It was good enough for 3rd place amongst DII teams and the first nationals podium in the history of Notre Dame Cycling. A few short hours later, O’Donnell and Snitzer took the line for the ITT. Amongst a very strong DII field, Snitzer finished 13th (45:09) and O’Donnell 25th (47:06).

In Saturday’s criterium Pratt took advantage of his front row start from winning the MWCCC conference omnium. Tilmans and Snitzer started near the back but managed to work their way up through the field. A short, tight, and technical descent followed by a moderately sized climb along the backstrech made for a very difficult race in which over 2/3 of the field was pulled. Tilmans managed to finish in the field at 28th, while Pratt was 29th and Snitzer 64th.

Sunday’s road race, 7 laps of a 10 miles loop, featured two sections of rough cobbles: a fast descent in the middle of the city and a switchback climb through a nearby park. Unfortunately, the race saw some very bad luck for the Irish. Tilmans suffered a flat tire only 3 miles in, received a neutral support bike, but was unable to chase back to the charging peloton. Just a few miles later, Snitzer went down in a crash that took out over 20 riders. He was still able to finish 54th. Pratt, the last remaining ND rider, rode near the front of the field even putting in a solo attack during the first lap. Unfortunately, he too suffered a flat tire with 2 laps to go and had to settle for 48th.

Notre Dame Cycling thanks all of their sponsors and fans for their support throughout the 2014 road season and the city of Richmond for hosting a fantastic event. Happy riding to all this summer! It won’t be long until the 2015 MWCCC season and National Championships in Asheville, NC.