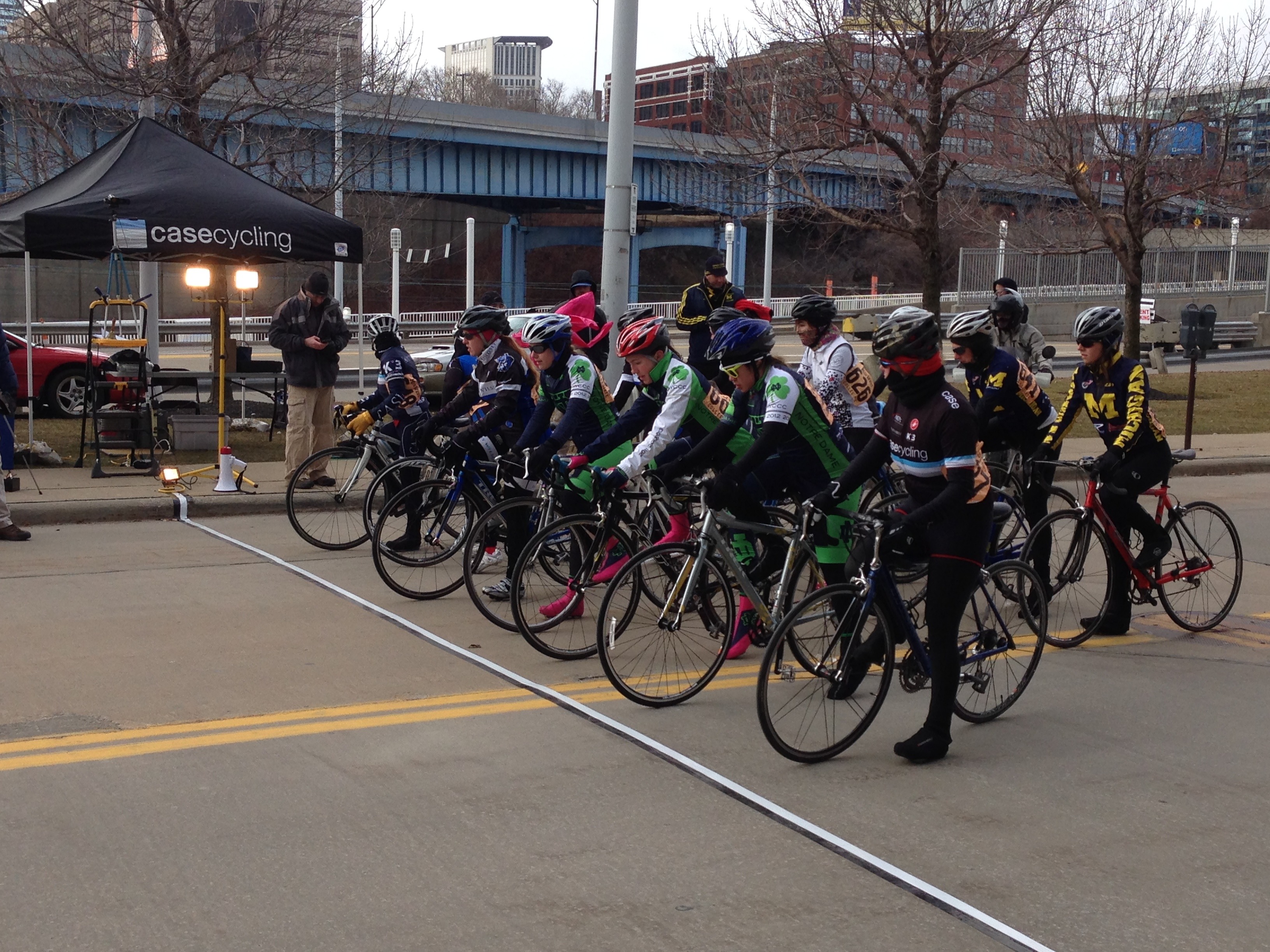 In classic Midwestern cold, clouds, and wind, the Cycling Irish took to the streets of Cleveland, OH, for Case Western’s criterium on Sunday, March 23. The course wrapped around the Cleveland Brown’s football stadium and saw temperatures in the mid-20s with snow flurries at times.

The men’s A team scored Notre Dame’s first criterium win of the season and its first ever A criterium win in school history. Early in the race John Pratt (Jr.) jumped into the day’s winning 6-man break. Back in the main field, Jim Snitzer (Jr.) and Luke Tilmans (Sr.) slowed the pace at the front of the rest of the field to ensure the move with Pratt would stay clear to the finish. The team tactics worked to perfection and Pratt was comfortably in the top 6 heading into the final hundred meters. He started his sprint early and sailed to the line in front of riders from varsity programs Lindenwood, Lindsey Wilson, and Marian.  After a hard day of controlling the field, Tilmans and Snitzer finished solidly in the field with 15th and 17th respectively.

Graduate students, Tom Frederick and Mike Lorenzen, set a fast pace at the front throughout the race. The high speed reduced the field in numbers setting them up well for the final laps. Frederick, who spent much of the day leading the race, was caught out in an untimely crash with only half a mile to go. Lorenzen managed to keep a high position going for the sprint and took an impressive 2nd place.

Freshmen riders Sarah Cullen, Emma-Kate Conlin, and Devin Stalker, proved to be a young, but resilient trio for the Irish in the women’s B/C category.  Early in the race, 2 riders from Michigan and Marian started a breakaway the ended up sticking until the end.  Despite attempts by Cullen to bridge to the break, the field had to settle for a sprint for third. Conlin had a strong performance finishing 8th and helped keep Sarah at the front. In the final sprint, Sarah struck early and found herself finish a carrier best 5th. Stalker rounded out the great day’s ride for the women’s team by finish 12th.

Notre Dame solidified its lead of DII Team standings, while Pratt and Snitzer remain 1st and 3rd respectively in the individual DII standings.  John Pratt jumped to 2nd overall in the conference after his victory Sunday.