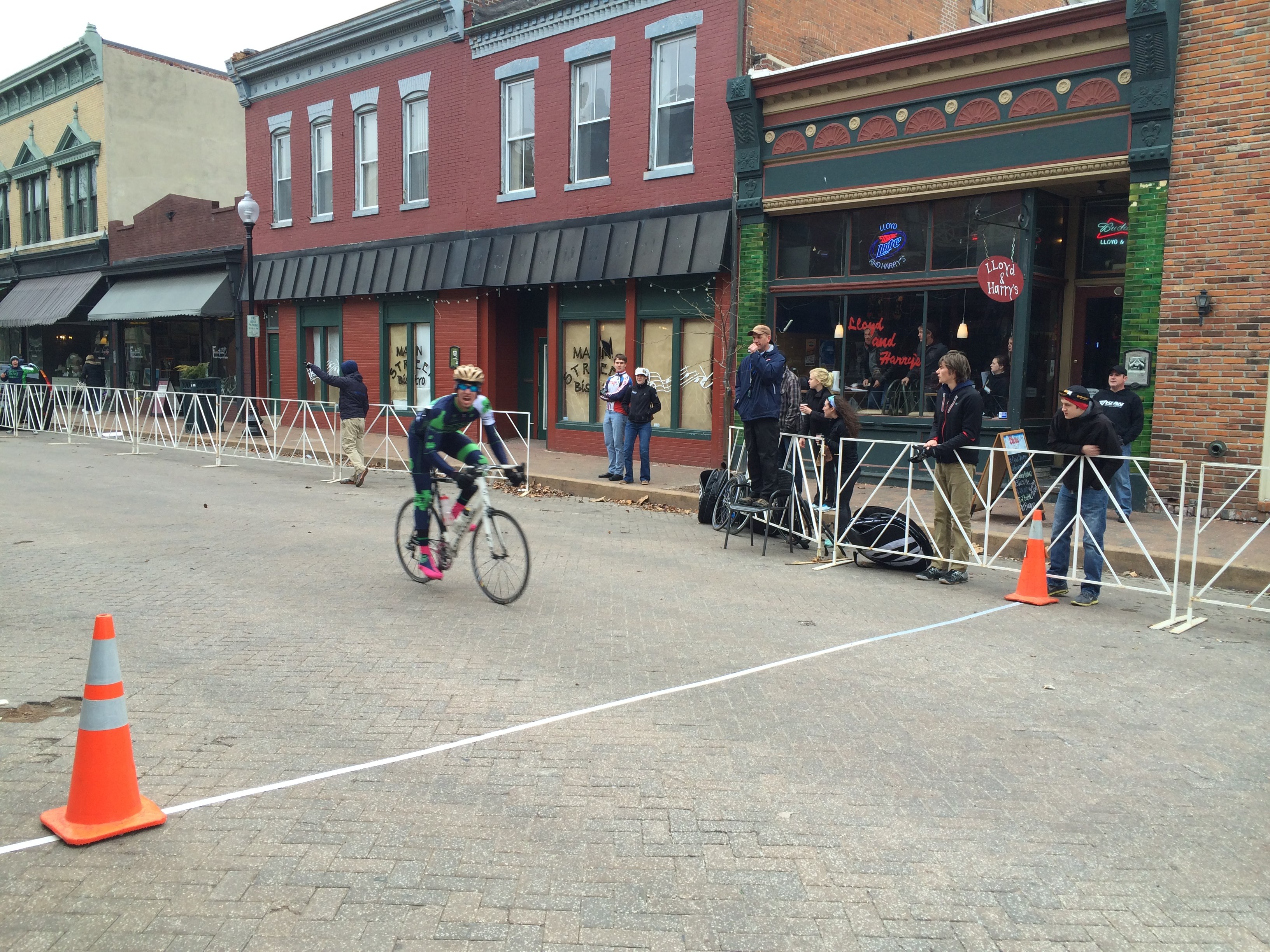 On the weekend of March 15-16, the Cycling Irish travelled to St. Charles, MO after a heavy week of training in Longmont, CO for spring break. The Lindenwood Race Weekend featured two days of hard racing. Saturday featured a 13 mile team time trial and a road race with 3 major climbs and 1,700ft of elevation gain per 21-mile lap. Sunday’s criterium was held in downtown historic St. Charles.

With the help of Freshman B rider James Pratt, A riders John Pratt and Jim Snitzer led the team time trial to 6th place despite missing key A rider Luke Tilmans and not having any aero equipment because of spring break travel. Later in the day, Pratt and Snitzer took the line in the 4-lap, 84 miles road race, the longest of the season. In a crosswind section late in the second lap, Pratt drove a successful attack that saw 14 riders get away from the main field. After several more climbs and riders being dropped from both the breakaway and peloton, it was apparent the break was going to stick. One Marian and one Lindenwood rider managed to get away from the break during the last lap and Pratt took 9th. Meanwhile, back in the second group on the road, Snitzer attacked on the last major climb of the race with a Lindenwood rider. They stayed away until the finish and Snitzer took 11th.

For the second race weekend in a row, the criterium came down to a field sprint, a rarity in collegiate A races. The strong wind made it difficult for attacks to stick. In order to place high in the sprint, you needed to be very close to the front going into the last turn because it was sharp and required riders to slow down and accelerate sharply before the finish line. Pratt entered the turn around 15th place, not a very good position if you are looking for a win. Nevertheless, he showcased his signature sprint to overtake numerous riders in the final meters and move all the way up to 6th. Snitzer finished mid-pack, 32nd.

After his 4th consecutive top-10 finish, Pratt remains in 4th place overall in the MWCCC individual omnium and 1st place in DII. Snitzer moved into 3rd in DII.

After stepping up to give a tremendous effort in the A team time trial, Freshman James Pratt began the 63-mile, 3 lap road race as a top contender for a podium spot. Although the hills of Missouri allowed the peloton to gain large time gaps on the 6’3” rider from Notre Dame, Pratt powered his way back into contention after each of the first 6 climbs, compensating for his losses by gaining time on the flat sections and the descents. During the final lap, Pratt began to test the rest of the B field by setting the pace on the 7th big climb of the day. However, the big freshman could not overcome the force of gravity as quickly as some of the competition and settled for a still-impressive top ten finish at the end of the grueling race.

Early in the criterium, a breakaway consisting of 2 riders both from Marian, formed. They ended up staying away until the finish, leaving the field to sprint for 3rd. Pratt prepared to foil the hopes of a Marian sweep of the podium. With 2 laps to go he advanced to 5th place in the peloton and followed a strong pace set by Minnesota. After accelerating to the front of the peloton during the last lap, Pratt zipped around the final corner and hammered his sprint to a 3rd place finish several bike lengths ahead of his closest competitors, celebrating a personal best finish in a thrilling field sprint.

Graduate student’s Tom Frederick and Mike Lorenzen kicked off the weekend with a first place in the team time trial, despite only having 2 of the normally 4-person sized team. Just a few hours later, they both started near the front of the 21-mile, 1 lap road race, with Frederick setting the pace prior to the first of the large hills. Lorenzen suffered a set back during the first climb as two other riders were taken out of contention due to a thrown chain and blown tire. He was able to rejoin the group on the following climb. During the last major climb, a 2-man breakaway formed and Frederick led the chase group. Despite not being able to catch the 2nd place rider, Frederick dropped the other chasers in the final mile to take an impressive 3rd place in his second collegiate road race. Lorenzen hung on to take 23rd.

In the criterium, Lorenzen was sidelined with bike mechanical difficulties while Tom managed to work with a main group of 8 riders. After taking an impressive pull into a 25 mph headwind that pulled the 2nd place rider back into the group with one lap to go, he took 8th.

The team sits in 4th place in the overall team standings and 1st in DII after two weekends of racing. Next, ND travels to Cleveland, OH for Case Western’s criterium this weekend on Sunday, March 23.