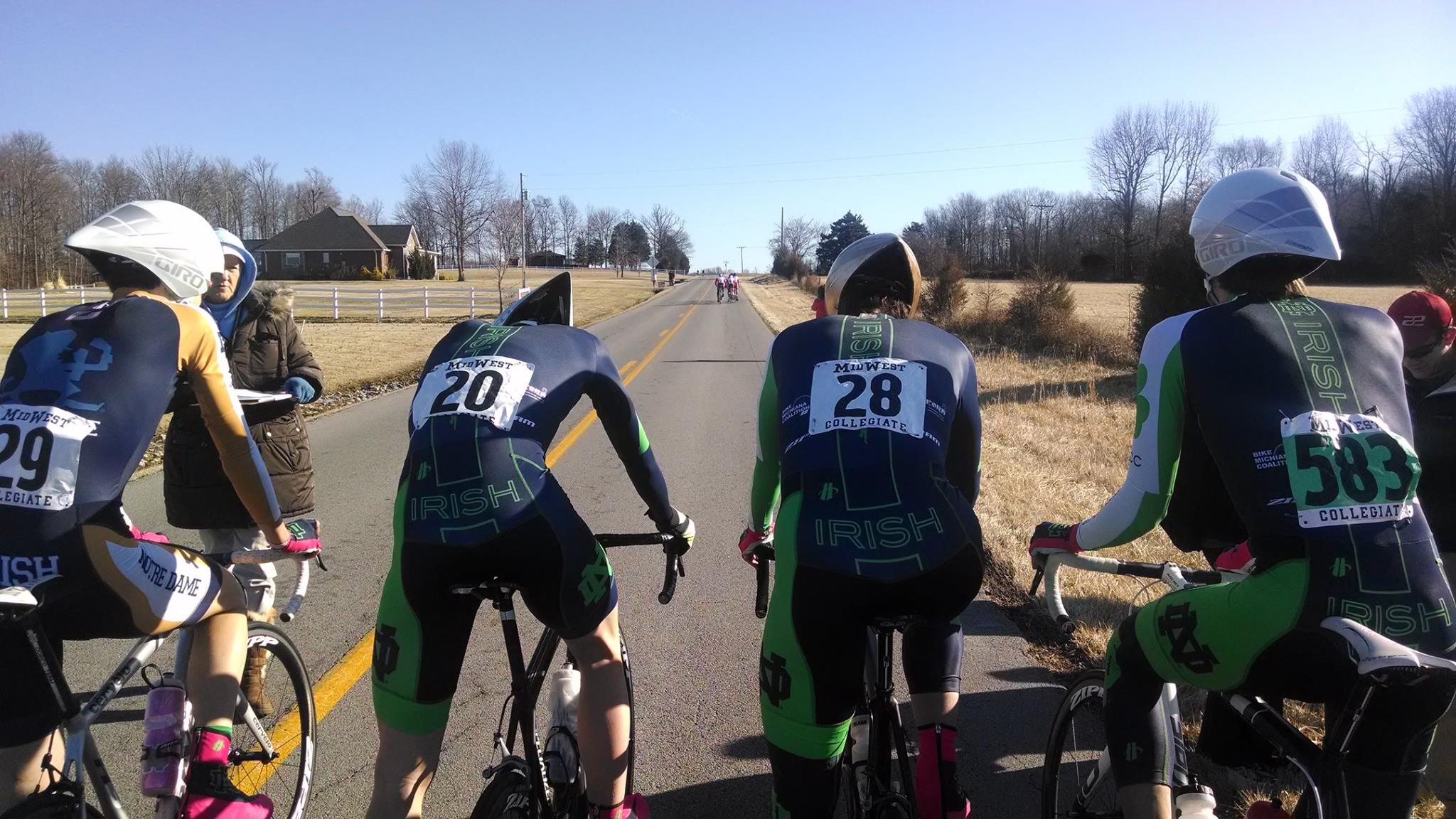 Notre Dame’s A team began their first weekend of racing in 2014 with a resounding performance all-around. Saturday morning’s team time trial was the first event, where Luke Tilmans (Sr) Jim Snitzer (Jr) John Pratt (Jr) and James Pratt (Fr) drove the Irish to a solid 5th place finish, beating all other non-varsity squads. The 75 mile A road race on Saturday afternoon, contested by over 50 riders, was fast-paced and aggressive throughout. Snitzer and Pratt proved their strength by making the day’s breakaway of 12 riders. In the finale, Pratt fought to an impressive 5th place finish. Tilmans rode strong in the second group on the road, pushing the pace over Kentucky’s countless climbs and finishing a career best 18th. Snitzer posted 29th after his strong start. Sunday’s criterium saw countless attacks off the front, but each one was reeled in by the charging peloton. Pratt once again fought his way off the front, but was reeled back in by the main field. In the final sprint, Pratt took 7th and Tilmans was 28th out of the highly competitive 60 rider field.

James Pratt was the lone B rider for the Irish. After stepping up to assist the A’s in the morning’s team time trial, the talented freshman stayed with the lead group going into the final climb of the 50-mile B road race and took 8th over the top. He also had a strong performance in his first collegiate criterium.

Graduate student Tom Frederick completed his first-ever mass start race in a very large D field. After avoiding several wrecks in the early miles of the road race and consequently missing the winning break, he fought his way back through the field. Out-climbing his group on the final climb, he took an impressive 28th out of a 70+ rider field. He also had a very successful first criterium, managing to stay near the front of a D field that was scattered by the cross winds down the backstretch of the course.

Freshmen Sarah Cullen and Emma-Kate Conlin also made their collegiate racing debuts over the Lindsey Wilson weekend. Despite only having the 2 riders for the normally 4-person team time trial, they managed to bring in 3rd place. They each had a very strong showing in their first collegiate road race, with Cullen taking 6th and Conlin 22nd. In Sunday’s criterium, Cullen was 8th and Conlin 17th.

The cycling Irish sit in 5th overall, 1st in DII, in the Midwest Collegiate Cycling Conference after the first weekend of racing. Next up, much of the team will be attending spring break training camp in Longmont, CO. Afterwards, they will return to racing at Lindenwood on March 15-16.