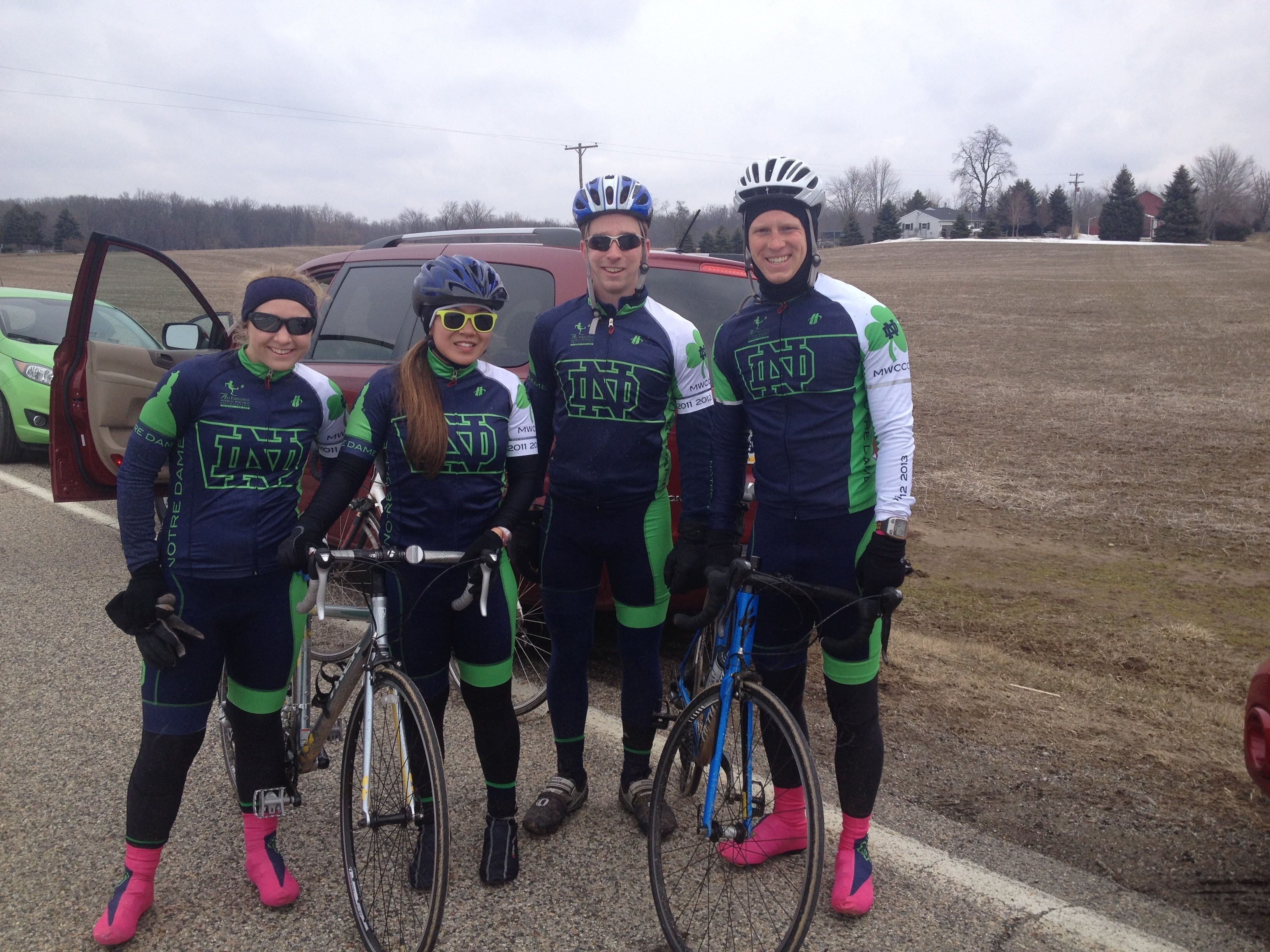 The cycling Irish headed up to Michigan State University for a full day of racing on Saturday, March 29. The races included a road race, featuring 5 mile laps with a 2 mile section of dirt roads, and a 6.8 mile individual time trial.

Juniors John Pratt and Jim Snitzer and Senior Luke Tilmans started the men’s A 55-mile road race responding to numerous attacks from varsity programs Lindenwood and Marian. After Notre Dame was left out of an early break of 10, Pratt attempted to get away from the main field and his other season-long individual omnium competitors. Unfortunately, none of the attacks stuck. A chase group including Snitzer and Tilmans with about 12 riders formed in the dirt section during the 3rd lap. The next 3 laps were extremely agressive, seeing many attempts to bridge to the leaders. In the end, Snitzer and Tilmans finished 17th and 18th respectively.

Just an hour after finishing the road race, the 3 A’s took the line for the ITT. Pratt finished with the 4th best time of the day, just 13 seconds of the leaders pace, while Snitzer was just behind him in 5th. Tilmans managed to place 20th, despite loosing about a minute to taking a wrong turn.

Graduate student Tom Frederick and Sophomores Brennan Lanier and David Berno led the way for the Irish in the men’s D 25-mile road race race. After just 3 miles in, the peloton was abruptly stopped due to fire crew responding to a barn fire near the course. After a two hour delay, the race was restarted with a combined D and C field. Frederick came out on top among the Ds, while Lanier and Berno finished 4th and 5th, respectively. For Berno, it was a stellar first career cycling race, and for Lanier, it was a strong season debut. Terrific Tom will likely upgrade to the C’s for his next race after a well-deserved victory. This season’s very strong group of D riders will look to continue to produce numerous top-5 finishes and possibly move up to C’s in the coming weekends.

In the Individual Time Trial, Frederick was 2nd, Lorenzen (who drove up in the afternoon after competing in the Holy Half Marathon that morning) 4th, Lanier 5th, and Berno 7th.

Freshmen Sarah Cullen and Devin Stalker had a strong showing in the women’s B/C field for the second straight weekend. After taking large pulls at the front of the group chasing the 3-person breakaway, Cullen took 5th. Stalker finished her first career road race and rode on dirt roads for the first time, coming in 10th.

In the ITT, Cullen was 3rd and Stalker 5th.

Next up for the cycling Irish is Ripon’s team time trial and criterium on Saturday, April 5.