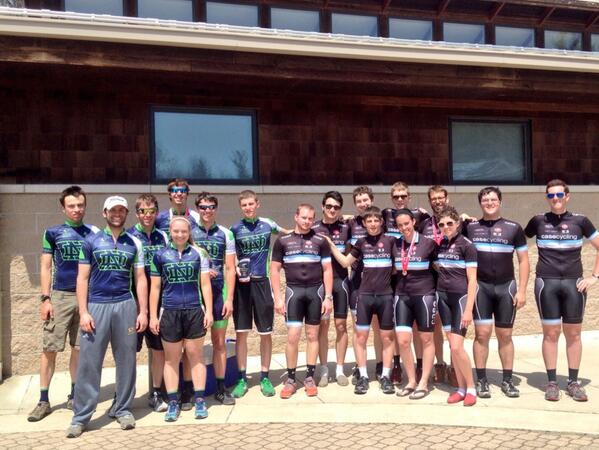 The Notre Dame Cycling team competed in West Lafayette, IN on April 26-27 in the MWCCC Regional Championships hosted by Purdue with the Division II conference title on the line. The races were held west of Purdue’s campus and began with an 8-mile team time trial on Saturday morning. The Notre Dame men’s A team represented by John Pratt (Jr.), Jim Snitzer (Jr.), Luke Tilmans (Sr.), and Andrew O’Donnell (Grad.) took a season best 4th place, only 32 seconds behind the winning time, while averaging a blistering 28+ mph pace.

Shortly after the time trial, the road races began. The course consisted of a 9.4-mile lap including a one-mile, 160ft climb followed by sections with strong winds and a fast decent. The races had riders completing between three and eight laps totaling 28-75 miles, depending on their respective categories. Sarah Cullen (Fr.), despite wrecking early on in the race, took 7th in the women’s B race after quickly catching up to the field. Mike Lorenzen (Grad.) once again set the pace for the men’s D race. He took third place after establishing himself in a four-man breakaway, providing the Irish with their first podium spot of the weekend. In the men’s C road race, Tom Frederick (grad.) was able to bridge to a seven-man break and took a season best 6th place. Notre Dame’s star freshman James Pratt was able to fend off several attacks by riders from Marian in the men’s B field, and took a career best second place in the final sprint. The men’s A road race saw an uncharacteristically large amount of wrecks, which claimed riders Douglas Ansel (Grad.) and O’Donnell as victims. However, the Irish were able to get their leader John Pratt in the day’s six-man breakaway. Both Snitzer and Tilmans worked together to cover other teams’ attempts to bridge the gap allowing the break to gain more than a ten-minute advantage. Pratt took second in the final sprint, while Tilmans and Snitzer finished 17th and 20th respectively.

Sunday’s circuit race featured a four-mile loop that included a short, steep climb, with no time to recover due to strong crosswinds and a quick descent back to the base of the climb. Cullen put in an impressive effort to grab 9th place in women’s B. Lorenzen applied constant pressure while attacking the men’s D field, eventually taking 15th.  In men’s C, an attack by a rider from Case Western established the ten-man break including Frederick in the final lap. On the finishing climb, Frederick took another impressive top ten finish grabbing 5th place. The men’s A field was shelled by the tough climb and strong crosswinds; however, John Pratt helped Snitzer establish himself in the days surviving field. Snitzer eventually grabbed 18th, Pratt 21st, Tilmans 25th, and O’Donnell 30th in a very difficult race.

For the fourth year running, the Notre Dame Cycling team emerged as the MWCCC Division II team champions. Furthermore, John Pratt and Jim Snitzer took first and second place respectively in the Division II Individual Omnium. Notre Dame would like to thank Purdue for hosting a very well organized race weekend and providing a stellar setting to help bring an end to another successful MWCCC season.

Men’s A riders John Pratt, Jim Snitzer, Luke Tilmans, and Andrew O’Donnell will head to Richmond, VA for the USA Cycling Collegiate Road National Championships on May 2-4. The Irish will face the best collegiate riders from across the country on the course for the eventual 2015 UCI Road World Championships.