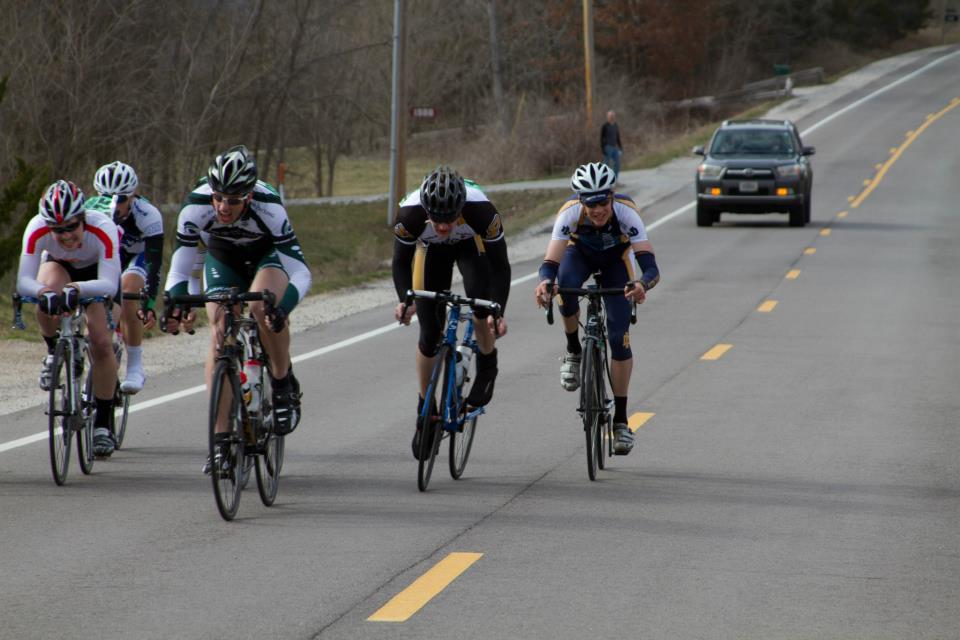 In the two previous team time trials of 2013, Notre Dame’s men’s A team had gradually closed the gap on the varsity conference teams, first losing to Lindenwood by 35 seconds, then by 15 in week 2.With a long, 13 mile course on the schedule for week 3, ND riders were confident the high volume training undertaken since early winter would pay dividends. Beginning 1 minute behind the Lindenwood team, ND took advantage of the tailwind on the early miles of the course, with Magro (sr), Pratt (so), Snitzer (so), and Tilmans (jr) rotating 30 second pulls on the front. Coming over the climb midway through the course, ND began to pass teams that had started 2 minutes ahead, with Lindenwood still visible in the distance. By mile 12, it was clear ND and Lindenwood were only seconds apart on the road, and led in the closing mile by Pratt and Magro, ND stormed across the line, stopping the clock comfortably under 30 minutes. Waiting anxiously for results, it was finally confirmed the Irish had finished 1 second out of a second place tie behind the varsity athletes of Lindenwood and Lindsey Wilson. Knowing many more than 1 second of mistakes had been left on the course, Notre Dame will be ready to challenge again at the next TTT in Purdue 3 weeks from today. Also putting in a great time trial were the women of Notre Dame, led by senior Carolyn McCann. In a team also containing freshmen Paige Handy and Emmy Kunce, ND claimed victory in the women’s B time trial, besting Marian University on the same challenging course contested by the men.

Following the morning’s team time trials, Notre Dame held a 15 point lead in the trophy competition, which was increased in the road race due to the performance of the both the men’s and women’s B teams . Racing first in women’s B, Carolyn McCann didn’t waste much time in the short race, finding herself  at the front going over the first climb at mile 4. On the plateau that followed, McCann started a breakaway with 2 other women from Purdue and Marian, and the three almost immediately rode out of sight. Gapped slightly on the third climb of the course, McCann rode hard behind the two leaders through the headwind to the finish, not losing or gaining any time for the next 8 miles. Ultimately, her 3rd place result was a career best, and it’s only a matter of time before she’ll strike gold in a B race this season.

In a grueling 63 mile race, the combination of Mike Chifala (so), Snitzer, and Tilmans rode relentlessly at the front of the pack, pushing the tempo on each of the 3 climbs per 21 mile lap and shedding over half the field in the process. After the first climb of the second lap, the dwindling pack splintered further, with all 3 Notre Dame athletes making an elite selection of 7 that raced towards the finish. With only 10 miles remaining, Snitzer and Tilmans accelerated on the final climb and were briefly alone, before being joined by one rider from Murray State. The three were not to be seen by the field again, and while Snitzer and Tilmans were bested at the line, their 2nd and 3rd place finishes, respectively, scored major points for the team. Not far behind, Chifala crossed the line in 11th place, marking the second time this season ND’s B team placed all riders inside the top 15.

Making a return from injuries suffered in a crash at Depauw, junior Jason Koncsol got his race legs back in Men’s D, while Phil Palmon and August Kunkel both recorded mid pack finishes in Men’s C. Finally, in the last race of the day, Notre Dame had an afternoon to forget in Men’s A. Pratt suffered from mechanical issues throughout the marathon 84 mile event, and while Andrew O’Donnell (grad) was able to resurrect Pratt’s chances with a strong early chase, both were undone midway through the event. Farther up the road, Magro was with what remained of the leaders through 57 miles, but ultimately was unhitched on the 9th of 12 climbs.

Despite the performance in A, the strong B results of the day placed ND firmly in control of the D2 challenge trophy, and with Sunday’s events cancelled due to a winter storm, the trophy will find itself displayed in Notre Dame’s RecSports office again for the next year! Notre Dame remains in control of the MWCCC D2 standings (4th in the conference at large) and will look to increase this margin in the next full weekend of racing 2 weeks from now in Michigan.