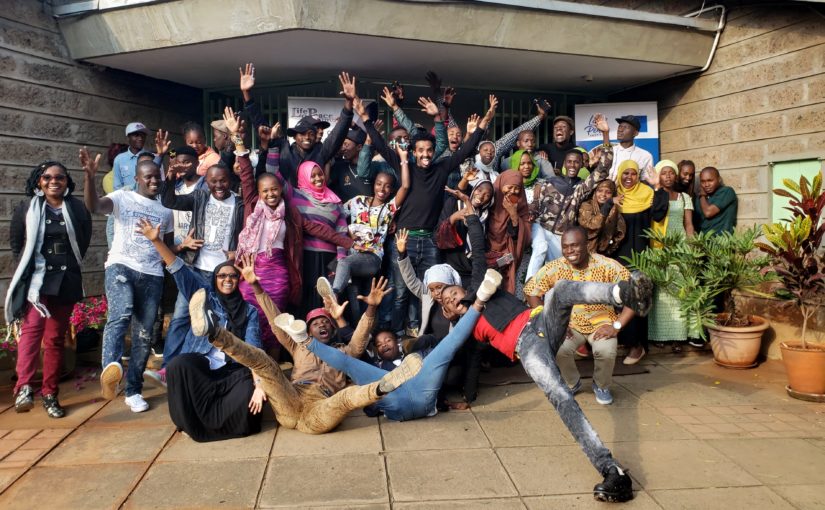 How does one move from living “with” the people to living “among” the people without having one’s  “otherness” or “foreignness” amplified in everyday life? This and many other questions continued to occupy my mind the moment I began my field experience in Kenya.

I had learned in my Ethnographic Methods for Peace Research class various ways of navigating the field, taking conscious note of one’s positionality and reflexivity in research contexts. My experience in Kenya has been full of opportunities for reflections and making observations that help to understand how my identity in a particular context shapes events around me. I’m interning with the Life and Peace Institute’s Kenya Program in Nairobi. LPI is an international center for conflict transformation that works  in the Horn of Africa and the Great Lakes region.

As a non-Kiswahili speaker, I have struggled to interact  with young people, the constituents of my field engagement, given their preference for sheng or Kiswahili slang. This is one point where my identity becomes an opportunity for building relationships and friendships, as many of the youth participants at the Sustained Dialogue (SD) sessions (LPI’s pilot program for the youth as drivers of peace) are fascinated by the uniqueness of my name, opening space  for interaction and mutual exchanges. Most of my time at LPI is  spent listening  to young people’s  stories, issues, and challenges, and their hopes for a better future. The youth participants at the SD sessions get to spend seven months experiencing the five stages of Sustained Dialogue: The Who, The What, The Why, The How, and The Now! The SD session is designed to enable youth participants to become more aware of their issues, understand each other, and utilize the process of dialogue to transform tense relationships while acquiring skills that will help them shape their future.

In spending quality time with these youth, I have been exposed to the realities of being a struggling young person in Kenya. Many young people in Kenya are facing strained relationships with security forces, especially the police. Some of them emphasized the lack of trust between security actors and young people, which results in profiling, indifference, and extra-judicial killings. There is a high rate of crime involving or suspecting youths. As a result, it has become a norm to categorize the youth population as “unsafe” and “harmful” thereby creating prejudices and biases on the capacity of youth to be agents of change. However, it has become unpopular to look beyond these stereotypes and focus and assess whether every youth is unsafe or harmful as described.

When I look at the long process of SD, the seven months of activities, and how committed these youth have been so far, I wonder  why we can’t see the hope in them for a better future. These youth have learned the physical, social, and psychological dimensions of supporting one another. They’ve learned to cope with their peers’ stories of trauma and tackle challenges together. They have learned the process of dialogue and how to be accommodating, tolerant, and supportive of one another. I have realized that when you confront reality, abstract concepts become difficult to talk about but easy to understand.

Transforming Themselves To Transform Others

During this transformative process, I have come to know these youth as “hopeful”. The resilience they have shown through peace actions and community service is one that is born out of a conscious desire for constructive social change. Many of these youth have used the SD sessions to transform themselves from passive observers to active peacebuilders in their communities. They’ve transformed themselves to transform others. Given the diversity of participants, the process has led to changes in attitudes—between Muslims and Christians, different tribes, and the majority-minority divides—thus, building trust and relationships that transcend prejudice and generational biases.

I have participated in many of the activities organized by these youth. They have used graffiti messages to demonstrate  hope and encourage their peers to avoid crime; they have provided bins in public places that are targets for waste accumulation; they have planted trees to support climate action and to remind themselves that they are on a journey of growth; they have raised awareness and campaigned against electoral violence in various counties; they have coordinated dialogues for youth in the streets;  they have used theatre and other arts to make peace less remote to the local people; and they have equally been involved in resolving conflicts among youth from different communities.

These are various ways the hope-filled  youth are driving the wheel of change, bringing their peers together and addressing the local dynamics of youth issues using a local response that propels others into action. Many reformed youth attribute their change of action to the very inspiration they got from the SD participants during their peace actions in communities. Many are expressing how they’ve been lured into the good life by their peers who are hopeful for a better future for them. 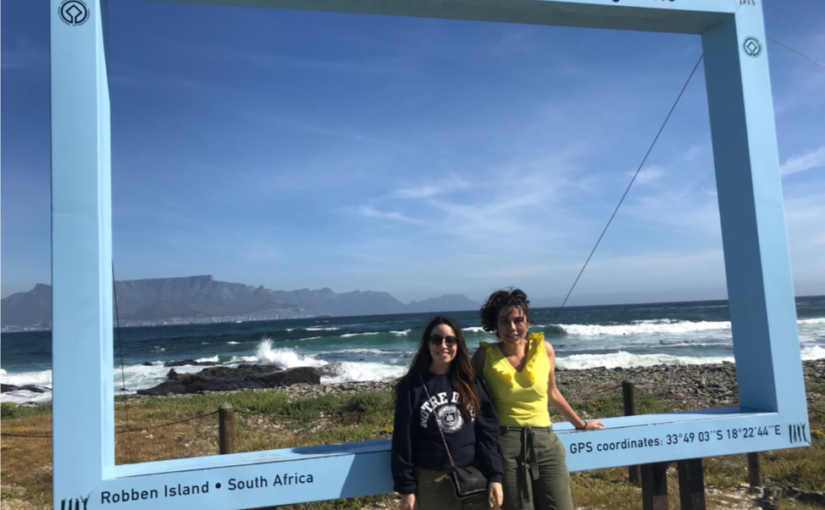 Given my current interest in the links between structural violence, inequality, and transitional justice, the Institute for Justice and Reconciliation (IJR) in Cape Town, South Africa, has been the ideal place to carry out research for my MGA capstone project. Initially, my inclination was to choose a Latin American country, given that all of my professional and academic experience up to that point had focused on Latin America, particularly on human rights and U.S. foreign policy in the region. However, I decided that, given the opportunity to conduct research as part of my Master of Global Affairs program, I should do so in a new context to compare, learn, and analyze solutions carried out by other countries for problems similar to those in my own region.

As I read about South Africa in a post-apartheid era, one thing was clear to me: the peace negotiations and the transitional justice process—mainly focused on the Truth and Reconciliation Commission (TRC)—were successful in stopping direct violence, leading to democracy and the creation of a new constitution. The constitution appears comprehensive and inclusive of all South Africans; however, the promises of change mostly remain on paper and the structural foundations of apartheid are still in place.

South Africa is the most unequal country in the world. This inequality results in huge socioeconomic issues such as poverty and unemployment as well as limited access to basic services such as health, sanitation, and education for the majority of the Black population.

As I now study the South African case, I find connections with the Guatemalan case, a country where a comprehensive peace agreement was finalized in 1996 after years of civil conflict.

Prior to joining the Keough School, I worked in Guatemala and saw firsthand how, despite an inclusive peace agreement signed almost 25 years ago, the indigenous people (who were the main victims of the conflict) are still living in poverty, marginalization, as well as enduring criminal violence and militarization. Both countries have a deep history of embedded racism and inequality, which to this day remain unsolved behind promises of peace and reconciliation.

My research is a case-study-based approach regarding South Africa and Guatemala. I focus on moments of missed opportunities, turning points, and failed policies that resulted in the inequality and structural violence still present in both cases—even after inclusive transitional documents. I would like to explore these questions for both cases, keeping in mind the economic and political contexts, as well as the international and external pressures both countries faced at the time of transition. As I collect my data in South Africa, I have five topics of emphasis that transitional justice processes fail to address: socioeconomic inequality, gender justice, security reform, mental health, and issues of land and other natural resources.

In the case of South Africa, the TRC’s narrow and legalistic definitions of justice and violence resulted in the recognition of only 22,000 official victims of human rights violations. The millions of people that suffered systemic structural violence during the apartheid years were not counted as victims. For instance, during apartheid, more than two million people were forcibly displaced from their homes and land. However, these displacements were not taken into account as violations and therefore not subject to policies of reparation. In Guatemala, promises from the State to recognize the rights of indigenous peoples and to address historic inequalities remain on the papers of the peace agreements.

Both countries face ongoing issues such as violence against women rising at alarming levels. High levels of criminal violence and gangs leading to the militarization of poor and already vulnerable communities are present in both. Gender justice, as well as important reforms to the security sector, did not occur during transition periods. In both contexts, issues of healing, addressing trauma, and psychosocial as well as mental health problems stemming from violent conflict and structural violence have been superficially addressed by the State and seen mainly as the responsibility of civil society.

As we have learned in the International Peace Studies concentration coursework, achieving peace is not only about stopping direct violence. We refer to this as negative peace (as per the work of Johan Galtung). Positive peace is inclusive of transforming oppressive systems that will address systemic injustices and inequalities.

The exclusion of socioeconomic issues, gender, land, trauma, and security sector reform from transitional justice is not accidental. Transitional justice processes have been historically important to document and disclose the truth behind massive human rights violations. However, these processes often aim for liberal constitutional democracy and market economy as their end goal.

Transitional justice should be a long-term process—rather than a truth commission with a deadline—and should focus on transforming oppressive and unequal power relationships and structures that are at the root of the conflict itself.

A comprehensive and holistic agenda for transitional justice processes is hard to deliver in practice, and we must take into consideration the economic and political contexts in place. However, we cannot dismiss the important connections between peacebuilding in post-conflict societies and socioeconomic and development issues. Otherwise, we run the risk that victims of direct violence will perpetually suffer from structural injustices, and that promises of a new post-conflict nation will remain only on paper.