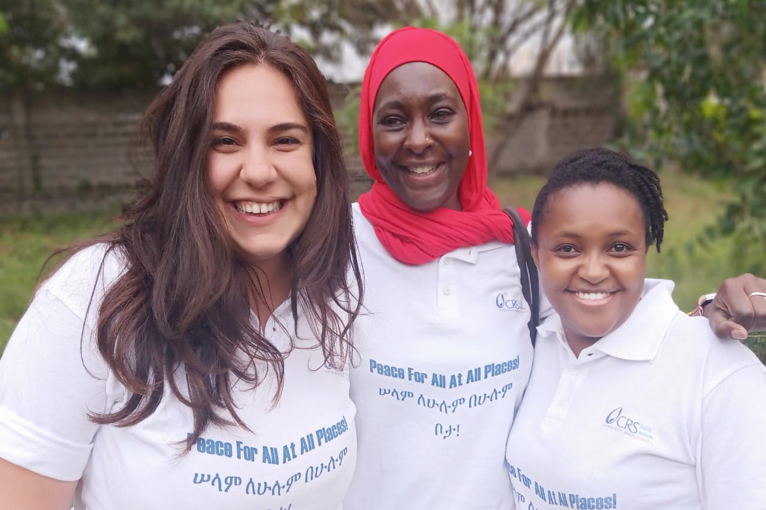 “…More like an inquiry. Probing the theory and investigating your interests—for the moment and in time. Seeking the connection and the tension between practice and theory. A search for the location of the individual who is likely impacted and affected by violence and conflict. A rhythmic step toward the hope that the music strums on. An investigation into the connection between psychosocial wellbeing, support, and sustainable peacebuilding.”

This is how I would describe my internship. A curiosity of sorts and a learning process linking me to the work of protection and the relationships therein in a moment to moment movement towards peacebuilding.

I have interned with the Catholic Relief Services EQUIP (Equity, Inclusion, and Peacebuilding) department since July 2019. My focus was on protection and youth in peacebuilding. CRS is a relief and development organization that often works with local partners to promote transformative and sustainable change. Using the holistic approach of integral human development, CRS has programs in agriculture, emergency response and recovery, health, education, microfinance, water security, youth, justice and peacebuilding, and partnership and capacity strengthening.

During my time here, I have engaged in both policy formulation around protection issues and advocacy on upcoming Youth, Peace and Security legislation while leaning a lot on my policy analysis lessons at the Keough School. I was based in the Baltimore CRS Headquarters and had proximity to Congress in Washington, DC.

An invitation into planning and design transformed to participation in formulating guiding principles for organizational and humanitarian response in protection and prevention from sexual exploitation and abuse (PSEA). We explored the role of language and culture in PSEA when working in communities. In a field that works with communities towards change, language and culture often determine the expression of violence and, consequently, the social transformation. What does this mean for organizations that choose to use the official languages in multilingual and multicultural countries? Or even the big four languages—English, French, Spanish, and Arabic—in global contexts? By creating a language criteria to promote inclusion, who gets excluded in the communication?

I believe an anthropological reflection would give insight here. The outcomes of this process established the need for incorporating more languages into our roles in community engagement and a survivor-centered approach to acknowledge the asymmetry in agency and power for the vulnerable and affected communities. We must recognize the gender and resource interplay in the conflicts that can get hushed in the search for survival. Everyday. The discussions expressed the importance of focusing on prevention and indicated that when the focus is protection, the root cause is yet to be addressed. Ultimately, the policy called for the need to listen to the local, not just for “box checking,” but with the intention of yielding power and co-creating change to support the human security of survivors.

As CRS adjusted its strategic plan, I had a didactic experience reflecting on the visioning and implementation of peacebuilding into different programming initiatives. What would strategic peacebuilding look like, for instance, in health and gender focused initiatives? Given that implementers at the community level were involved in this process, the relationship and, in some cases, the tension between practice and theory was evident.

As the different actors held this tension with both curiosity and openness to experiment with an idea, I was encouraged. You see, as a learning peacebuilder, I am aware that we certainly do not have the answers or solutions to the violence and conflict in our world today. By all means, we try, we show up, we ask questions and seek to hear how communities and people envision peace. Then, we accompany the process and the people, we implement the ideas, and sometimes we build and inform the idea through feedback and functional relationships in that space. It sounds simple, but so does a surgical process on paper. Until you begin the dissection and realize that this is an intricate process needing attention, skill, listening, and presence with human beings—all at the same time and in an appropriate environment. And conflict and violence are not predictable.

When I began the examination of the implementation of the Singing to the Lions workshop, I found myself often interrogating the political, social, economic, and cultural contexts of the participants. Singing to the Lions is a psycho-education workshop to build resilience and foster social cohesion among children in contexts of violence and conflict. When noticing resilience in a community, we also need to look at the local and shared underlying structures making them resilient and reinforcing them toward sustainable peacebuilding. This provides the appreciative inquiry into how well the environment fosters the individual’s psychosocial wellbeing and possibilities of sustainable peace.

In this process, I found that although the target audience is children, depending on their context and needs, different implementers have “cherry-picked” what works for their contexts and other identities (age and role). Certainly, this modification impacts how the evaluation of such an approach works, even with a preexisting monitoring and evaluation process. What would contextual indicators look like from the perspective of the individual in this case? Please ponder with me here.

Finally, I wonder, “what, who and how” have I become as a nascent peacebuilder? I don’t wish to get lost in the process and emerge without a soul in the end. I am grateful for the community of colleagues that held me in the learning and the inquiry. I am present to the local communities where my feet journeyed for this transient time. As I reflect with hope for those who continually work and seek change, I join you all in the reflective practice, in the study, and in being. 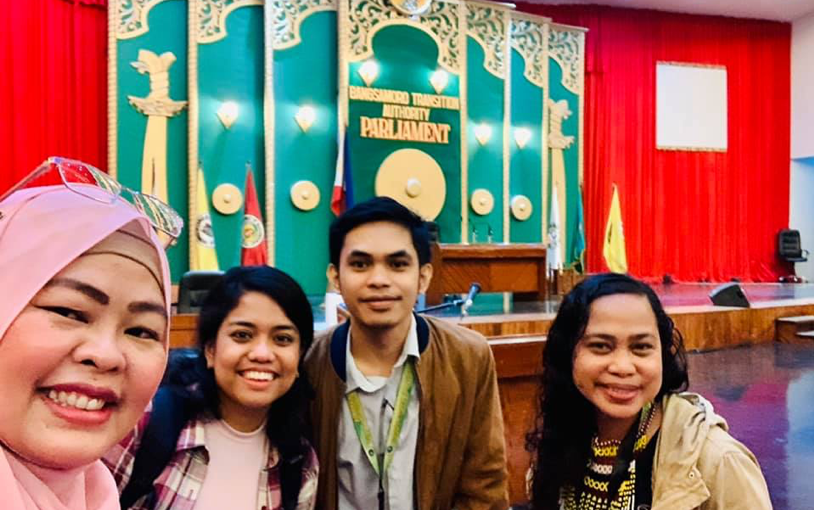 When MP Maisara Dandamun Latiph informed me that my internship would entail frequent travel to Cotabato City, Maguindanao, and Marawi City, Lanao del Sur, I said yes excitedly. I also could not shake my latent worry about traveling to Marawi City.

Marawi was once a thriving, picturesque city on a lake, and capital city to the Province of Lanao del Sur in the Philippines. Unlike the rest of the Filipino population, the majority of the people within Bangsamoro Autonomous Region in Muslim Mindanao (BARMM), including Marawi, are Muslim. Hence, Marawi is also formally known as the Islamic City of Marawi, distinguishing itself within the Christian majority state of the Philippines.

My concern for travel to Marawi was due to the highly publicized Marawi Siege back in 2017. On May 23, 2017, Marawi was attacked and then overtaken by an ISIS-affiliated group known as the Maute group. The battle between Maute and the Armed Forces of the Philippines lasted five months, leaving a considerable portion of old-town Marawi in ruins and people fleeing for refuge.

Having now visited the city several times as a part of my six-month field immersion project, here is a glimpse of the story of Marawi from my observation.

About my peacebuilding internship

I am currently the legal researcher for Attorney Maisara Dandamun Latiph, one of the 80 members of Bangsamoro parliament. She is a lawyer and one of the drafters of the Bangsamoro Organic Law, a Philippine law that provided for the establishment of the political entity currently known as the BARMM. She is appointed by the President.

In my role, I attend parliamentary sessions and listen to their debates on various issues, ranging from the dengue and polio outbreaks to Department of Public Works projects and annual budget planning. I then research issues for MP Maisara based on what the office needs and assist with the drafting of various documents from letters to resolutions to draft bills.

During our onboarding process, MP Maisara briefed me on several of her priority legislative issues, which ranged from education and Islamic banking to lake conservation and protection of vulnerable populations.

As a member of parliament, one of the legislative priorities of MP Maisara is the rehabilitation and conservation of Lake Lanao. As a native Meranao, she has a cultural attachment to the lake, in part because the Meranao people derive their name from it. “Ranao” or “Ranaw” within the Meranao local vernacular means “lake,” so “Meranao” means “people of the lake.”

Numerous articles and pieces of research have highlighted the plight of Lake Lanao due to unsustainable water use by various stakeholders and industries, including the power industry, local agriculture, household wastewater from the surrounding settlement area, and, more recently, effects of the Marawi siege. Even hydropower plants, despite championing their cause as “green” and low carbon, pose a danger to the lake’s water balance and biodiversity. Compounded by the threat of climate change, there is a looming threat that the lake and its water tributaries will go dry.

If that happens, what happens to the Meranao people? What will the people of the lake become without their namesake?

My first visit to Marawi City was to assist MP Maisara in hosting her first-ever public consultation on the issue of Lake Lanao rehabilitation and conservation. Participants agreed that the best next step would be to establish a Lake Development Authority overseeing the conservation and sustainable use of the lake’s various resources. Since then, we have had several meetings with a technical working group to formulate a better bill, which establishes a Development Authority.

It has been two years since the siege ended. Yet, the scars and trauma run deep for the people, even for Marawi residents used to the sound of daily gunshots from feuding clans. Marawi residents who lived in the most affected areas cannot return to their homes because the city is still closed and has not yet been rebuilt. The process of cleaning the improvised explosive devices (IEDs) and demolition of some of the buildings is still on-going.

Even those who did not live in the most affected area have left the city to settle in Iligan City or Cagayan de Oro. The memory of that day still haunts them.

The process of Marawi rehabilitation and protection of Lake Lanao showcases an obvious opportunity for a better and more sustainable development plan.

When it comes to post-conflict environmental peacebuilding, water has long been vital for building sustainable peace and for providing immediate societal benefits. I think Marawi and its proximity to Lake Lanao represent what long-term post-conflict peacebuilding should look like.

I hope that the people, the Government of Philippines, and the Bangsamoro Government do not fall into the common trap of sacrificing the environment in exchange for short-term economic development. Long-term planning is more crucial, as the threat of climate change is no longer near but here already. An integrated approach to the environment, conflict, and peace are imperative for the Government’s program and policy as well as incoming development projects to the area.

Multidisciplinary Approach in the Future

Environmental peacebuilding draws its body of knowledge from various disciplines. In this particular case, from environmental conservation, structural-institutional change, and post-conflict peacebuilding (trauma healing, etc.). As students of the Keough School, we will encounter more complex challenges upon graduation nowadays, especially problems exacerbated by climate change. With its interdisciplinary approach and mix of several concentrations, hopefully the Keough School can prepare students for challenging circumstances like these.

For me, Marawi rehabilitation represents the complexity and scale of challenges that environmental, peacebuilding, and development actors will increasingly face.