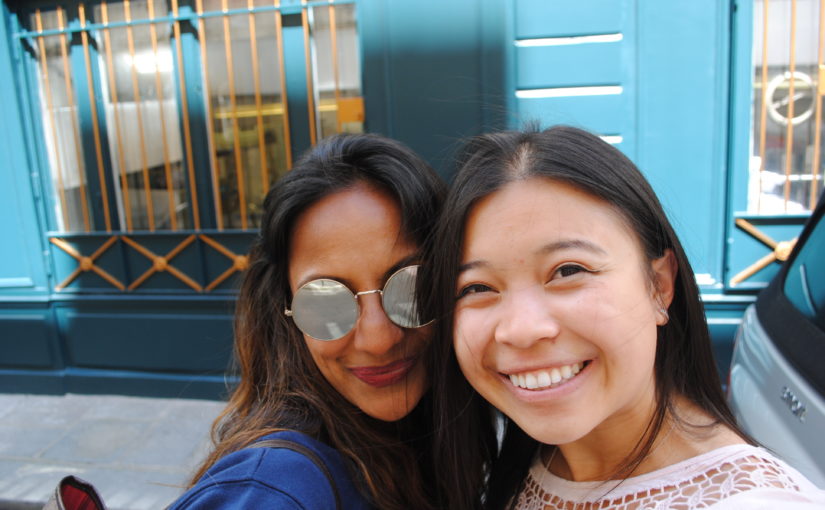 Who needs time for rest? The day after finals, I left ORD Chicago weaponed with my passport, universal adaptor, and pocket dictionary. The flight passed smoothly, but after arriving in Paris, I found that the cab driver did not take credit card, and JP Morgan Chase did not appreciate foreign transactions. I already utilized “I’m so so so sorry” in French.

I study at Lutece Langue in the city center. I am enrolled in their intensive program in the mornings, and their practical “atelier” workshops in the afternoons. 4.5 hours a day, 22.5 hours a week, and 90 hours of guided instruction this summer.

In the mornings, we listen to french recordings, read miscellaneous journal articles, and communicate our opinions. We reflect grammar points and converse about our weekends. Workshop are geared toward practical applications, and themes include conversation, pronunciation, writing, and cultural exploration about Paris. Classes are taught in only French, and are limited to 7 students each. Students are grouped based on ability, and reorganized at the beginning of each week for level adjustments.

As all Mondays do, this past Monday brought about the start of the new week. During the first two weeks at Lutece, I was in the highest level group. This past Monday, I was rapidly told in French that I was being moved to a lower group. There were new advanced students arriving, so they wanted to adjust the level of the course to suit their needs. This meant there was no longer an appropriate spot for me in that class.

I responded, in English, that I was going to take a walk. Hopefully it was not too obvious, but I was upset, probably irrationally so. It was hard to swallow that I was not advancing levels, but the opposite. I realized that language learning contains an element of humility. It was important for me to see that every person is at a different level, and acquires the language at a different pace.

Lutece has great teachers that care about the students. They diligently correct us as we speak, and give us the savoir-faire on slang, cinema, and the best macarons. However, I think that I need something more militant. There is not enough grammar or homework. Because class groups change from week to week, there is no consistency or logical flow between topics. You might not be able to learn relative pronouns because the topic was covered before you arrived, and that’s just that. In all, I’ve enjoyed my time at Lutece Lange. The staff is welcoming and the students are dedicated. I’ve learned a lot within these tiny, unairconditioned rooms on the third floor of a Parisian business complex. Most importantly, I’ve learned that an intensive French class only begins life-long pursuit of fish-lip pronunciation and pain au chocolat. Hola from Alicante! Already one week down, and only more seven to go; time is already flying by too fast. I arrived in this beautiful city, located on the southeast coast of Spain, last Sunday. The first night, our program had organized a tapas dinner at a local restaurant so that we could have our first taste of Spanish food and culture together. We tried many different traditional dishes, but my favorite was tortillas de patatas. As the waiter set down the plates, he told us about the recipe: although every version is a little bit different, the base is always potatoes and eggs. First, they fry the potatoes in olive oil, and after they mix them with eggs and cook it; in many ways, it reminds me of an omelet. People often adds things like bread, onions, etc. Bottom line: it is delicious! Our program director also informed us that the meal is extremely common in this region of Spain (a fact which was quickly confirmed when my host family made it for me the next day). The first historical reference to the dish is from 1817! Obviously, it would have been a simple and decently nutritious meal to prepare. I want to learn how to make it so that my family and friends at home can try it.

I moved in with my host family on Monday. My mamá española’s name is Marisol, her husband is Miguel, their daughter is María, and their son is also Miguel. They are all extremely sweet and, most importantly, patient with my lack of Spanish skills! The first couple of days, I could barely understand anything they said, whether they were talking directly to me or to each other. However, I have already noticed a lot of improvement; by now, I can almost always keep up with their conversations, even though it is still pretty intimidating to participate in their rapid exchanges. Native speakers tend to use slang and not pronounce certain letters, so it will be a process. However, I also started classes today, one of which is about colloquial language, so I know it will help tremendously. I am confident that, at this pace, I will be almost fluent by July. Throughout the rest of the week, I did a walking tour of downtown Alicante, visited the city’s ancient castle, travelled to another little town nearby with amazing views, swam in natural waterfalls on the side of a mountain, watched María’s basketball game, went to the market with Marisol, and enjoyed the beaches. Tomorrow I have a bike tour, and this weekend we are going to Valencia. All in all, I could not be more grateful to be here, or more excited for the next seven weeks! ¡Hasta luego!