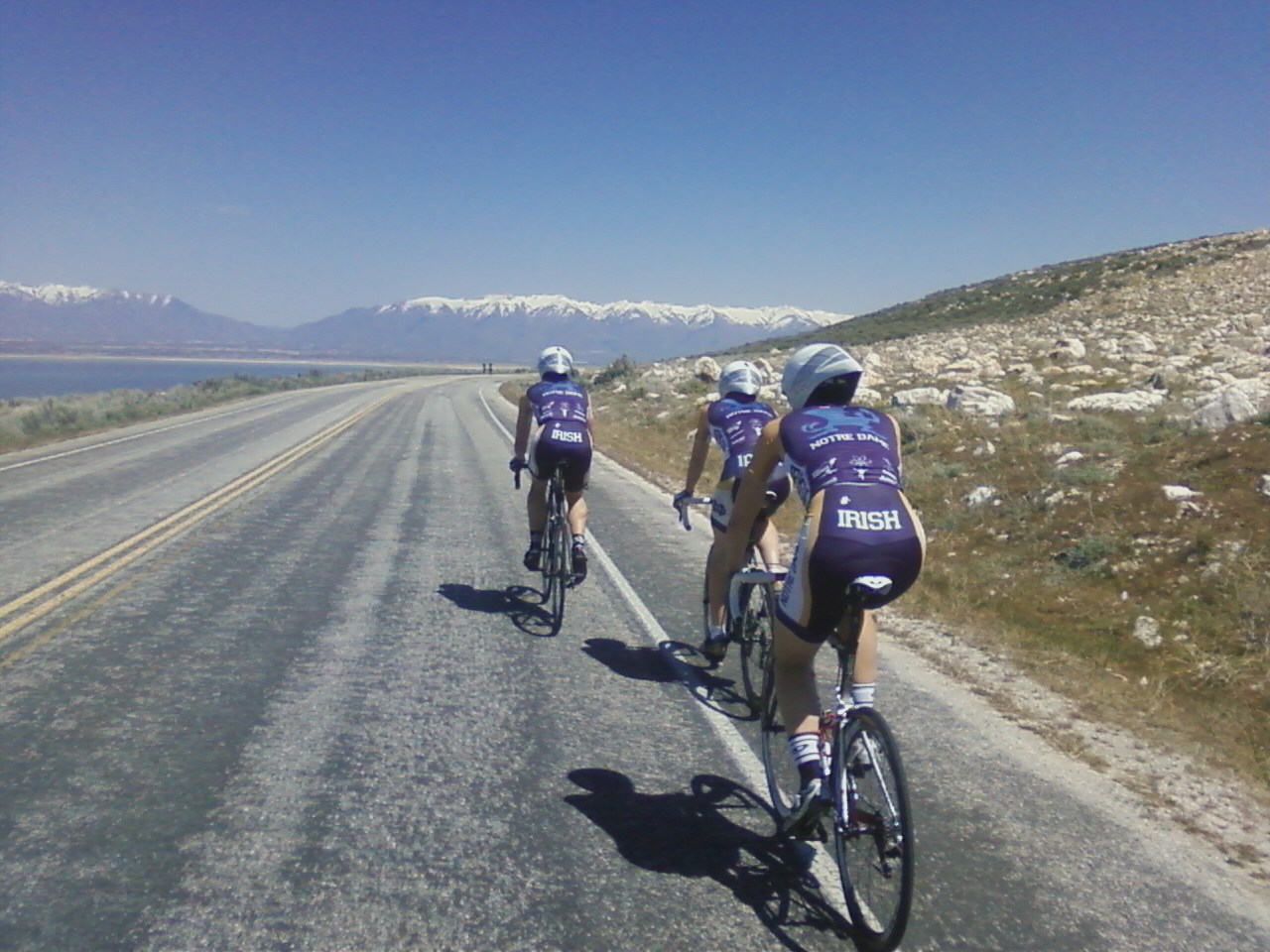 A young Irish squad enters the 2014 road campaign aiming for an unprecedented 4th consecutive MWCCC D2 team title. Another league championship is no certainty though, as Notre Dame will arrive in Kentucky without 10 contributing athletes from 2013, and their 27 combined years of collegiate racing experience. With 43% of the A team and 100% of the B team victim to graduation, it is imperative that ND’s large freshmen and sophomore classes continue to develop in the C and D categories to take advantage of the tiered conference scoring system.  Despite the losses, Notre Dame does return an extremely accomplished core of A riders whose impact should not be overlooked.  Among these athletes are the 2013 D2 men’s conference champion, ¾ of the 2013 Nationals TTT team, and one of the top ranked collegiate cyclocross racers in the United States. An MWCCC stop at Notre Dame on April 12-13th will bring some of the best collegiate cycling talent in the nation to the streets of downtown South Bend, and serve as one of the final tune-ups for the national championships. These national championships, to be held in Richmond, VA, are being billed as a test event for the 2015 UCI World Championship and return to the East Coast for the first time in over a decade.

Men’s A: An untested, but highly talented, Men’s A team will take the line at Lindsey Wilson looking to prove they belong with league superpowers Marian and Lindenwood. Defending D2 conference champion John Pratt will lead the team into the season, and with 2 years of A racing under his belt is not only one of the best finishers in the conference, but also more than capable of filling the captain’s role on the road. Jim Snitzer and Luke Tilmans are also set to fill vital roles on ND’s A team. A strong climber, Snitzer put

the conference on notice with his unexpected 12th place finish on the slopes of Utah at the 2013 national championship road race, while the rouleur Tilmans will step out of the shadows and into a starring role after strong contributions to the 2013 nationals TTT team. Veteran Douglas Ansel, a force on the MWCCC cyclocross scene, will also be a valuable asset when he returns to the pavement late in the season.  With skills complementing one another so well, count on Notre Dame to be a fixture in both criteriums and road races throughout the spring, as well as a strong competitor at the 2014 collegiate road national championship.

Men’s B: Although freshman James Pratt is a newcomer to collegiate cycling, he is no stranger to bike racing as he joins his older brother at the top of ND’s team. After a successful amateur summer season and a dedicated winter, expect James to have a short learning curve at the collegiate level. Holding record times up some of the most difficult training hills in South Bend, look for Pratt to strike early and often in the hillier road races on the conference schedule. Also debuting as the 4th member of the A TTT team, Pratt looks to be embarking on a notable career with the Cycling Irish.

Men’s C:  August Kunkel is the lone returning Men’s C rider, but hails from hilly Southeastern IN and can climb with the front of this field when in form. He will enter the season hoping that many of the D riders can quickly upgrade to bolster a category the Irish have owned in recent seasons.

Women’s B/C:  The women’s team enters 2013 young, but larger than it has been in years. Two ND women are set to make their collegiate debut at Lindsey Wilson, Emma-Kate Conlin and Sarah Cullen. Conlin, a freshman at Saint Mary’s College, has raced

both road and mountain in junior categories, while Cullen is an accomplished triathlete who could be a podium threat from week 1. Emily Kunce is also back in action for Notre Dame, and will look to build on a freshman campaign which saw her first ever bike racing experience. ND’s fastest B/C rider in 2013, Paige Handy will miss the spring season studying abroad, but was in tremendous shape during the fall and will return to the team in 2015. These ladies will be some of the most important contributors to the Irish this season due to the collegiate scoring system, and so far look to be up to the task!

Men’s D: In the perennial question mark category, Notre Dame will field a team of ten riders, only five of which have competed in a collegiate race. Undoubtedly one of the most experienced, if not successful, ND athletes, Samuel Melgar will continue his comeback to cycling in 2014. Working to regain the world class form he displayed at the 2010 Junior Olympic Games, Melgar will welcome the assistance of senior Jason Koncsol, who overcame a fractured arm in the second race of 2013 to become one of the

breakout riders of the season. Sophomores Brennan Lanier, Domenic Canonico, and Ryan Twardzik add depth to the squad, while new graduate students Mike Lorenzen, an iron man, and Thomas Frederick have both put in huge training hours over the winter. Joe Mueller, Jonathan Leslie, and David Berno all have extensive triathlon experience, and should adapt quickly to road competition this spring. All eyes will be on the D squad throughout the season, as their collective progress towards upgrades to the C category will be critical to repeating the team’s school record 3rd place conference finish in 2013.