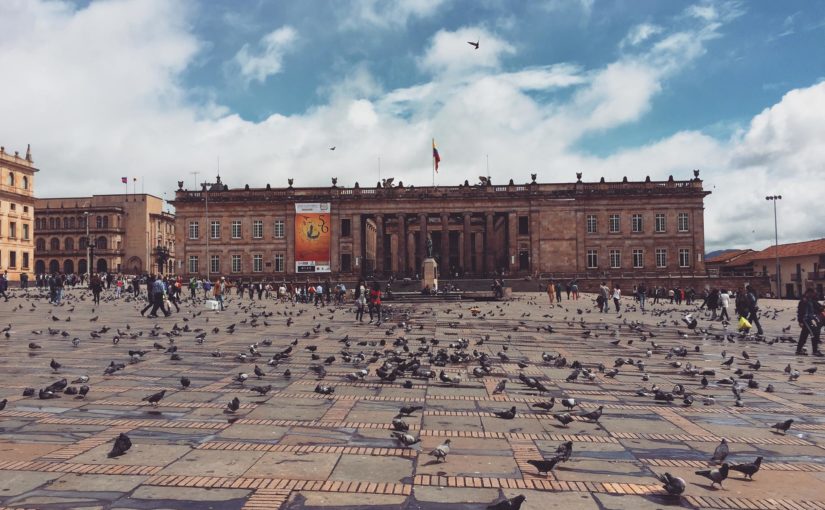 It was 12:39 a.m. on Thursday, July 19, when a 5.1 magnitude earthquake shook the land of central Colombia. The epicenter hit close to a small town in Huila—over 300 kilometers away from Bogotá—but the remezón was strong enough to jolt me awake in the middle of the night.

It had been five years since I last lived on land where earthquakes are a fairly regular occurrence, but the resilience of the capital’s structures protected me from any physical or emotional torment. That is, perhaps, one of the most interesting dimensions of coming back home to Colombia for an internship with the World Bank—the unexpected shelteredness. I grew up further south, in Cali, where the realities of the deep inequality of our country, and the precariousness of our peace and safety, are always just around the corner.

Bogotá, however, is much more neatly packaged for the international businessman or diplomat. It sells itself as one of the many capitals of the world and, often, its only “Third World” tells are the various potholes and occasional street vendors that add “charm” to the financial district. In Bogotá, only one house collapsed during the earthquake. It was an old house in the center of town and its inhabitants lived there despite an ancient eviction and demolition notice. The whole affair now stands as a fascinating metaphor for the state of the country—while the media reports mostly on the sleep lost by the capitalinos, not much is said about what happened in the smaller, rural towns closer to the epicenter, or what will happen to the one family who lost their home.

From abroad, watching the news through lagging livestreams or reading outraged updates on Twitter feeds, feeling disdain for the approach discussed above is quite easy. It is easy to blame the elite capitalinos for their blindness and indifference to the plight of Colombians on the peripheries (real or imagined). But being here, living in the bubble, I will admit to walking by the street vendors and pretending they are not there, to going back to bed after the earthquake, being thankful for how nice my apartment is and simply moving on. As I begin my internship with the World Bank and settle back into what once was a home, I recognize these pushes and pulls will become even stronger.

But which pull will be stronger? To give in to the comfort of a desk job in an elegant building in a wealthy neighborhood of a wealthy city? Or to reach out and find the crumbling houses before the next earthquake hits? Or, perhaps, we hide behind excuses of safety and security when forcing ourselves to choose either/or. As an outsider who was once an insider now trying to negotiate those forces, I hope this semester helps me find ways to pull myself and other Colombians out of these conundrums.

The past three months have represented a whirlwind of political events for Colombia, and I am glad I was here to witness and take it all in as an insider-outsider. May and June brought with them a heavily contested, polarized, and difficult presidential election. In a series of peaceful protests around the country, July brought the height of popular condemnation for the political assassinations of social leaders that have been occurring for years. Sadly, however, it seems that for many the most salient tragedy of the past weeks has been Colombia’s untimely elimination from the FIFA World Cup. One could argue that perhaps this avoidance-through-sports is due to the deep sense of uncertainty that plagues the country—unknowingness as to what will happen to the Peace Agreement with FARC under the impending Ivan Duque presidency; doubts as to what the legacy of President Juan Manuel Santos will be; and worries about the present state of the country’s other armed actors. For many of us, tossing and turning about what the referee could have done to spare us elimination at the hands of the English national team provides a stronger sense of certainty and control.

President Elect Duque will receive a country that is both hopeful and weary. Duque ran on a conservative “lets modify the peace agreement and lower taxes” platform that inspired urban elites and their economic interests, while also inflaming anti-Santos sentiments.

Weariness stems largely from the most recent onslaught of paramilitary, ELN, and FARC violence in the rural and semi-rural peripheries of Colombia. Indeed, the Democratic Center party and its members have a history of both being entangled with and denying the existence of paramilitary groups, and, as such, their return to the presidency concerns many observers. Together with ELN and FARC dissidences, paramilitary actors are responsible for the deaths of over 200 human rights defenders, indigenous representatives, and many others since the signing of the peace accords in 2016. This is, devastatingly, evidence that conflict in the country still abounds and that a Duque administration will face challenges not only in implementing the peace agreement (if they do so at all), but also in managing historical threats and new ones that may emerge.

As a Colombian who has been educated abroad for half a decade and who watched Santos’ second term and the unfolding of the peace negotiations through the lens of the media, I choose to share in the sentiment of hopeful weariness. I am worried about the future of the peace agreement—not because its failure would mean a FARC resurgence (I believe that ship has already sailed), but rather because it would represent a failure of the Colombian state and people to do right by the victims of decades of structural and direct violence.

As a peace studies student, I am keenly aware of the oppressive size of the challenges that face communities in Chocó and Antioquia, for example, and it worries me deeply to think these might be compounded by the destruction of spaces for justice where their truths might be told. Moreover, as someone who feels deeply committed to working for peace, development, and justice, I wonder what safe spaces will be left for us when the chips of violence fall according to new political arrangements.

I am also hopeful that the past years of political polarization and debates have awakened a spirit of moral activism in the hearts of many Colombians—we will not sit idly by and watch our prospects of peace be dismantled. Indeed, on July 6, a series of peaceful national demonstrations against the assassinations of social leaders spread throughout the country. Thousands of people in Bogota, Pereira, Cali, Barranquilla, Medellin, and many other cities, hit public parks and squares to clamor for justice and their protection. Using candles to represent the lives lost and the hashtag #NosEstanMatando (#WeAreBeingKilled), the crowds forced politicians, including the President Elect, to at least acknowledge the situation. As such, I have hope that the Colombia of 2018, one that has so many wicked problems and faces a tricky next four years, is also one of renewed political and ethical energy.

Fingers crossed that by the time the 2022 FIFA World Cup comes around, in those same four years plus four months, our getting eliminated truly is the only cause for national mourning.