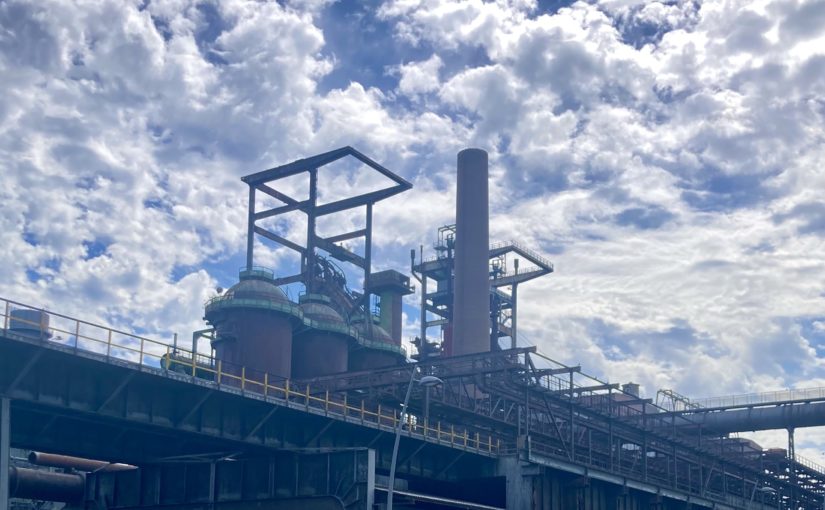 The trees here remind me of home. Surrounded by a lush green forest dotted with yellow wildflowers in northern Germany, I can easily imagine myself in my hometown in Wisconsin or a county park near South Bend. Just a few blocks behind me, an abandoned steel factory echoes the post-industrial narrative of many cities in the American Midwest. Aside from the staccato punctuation of German commuter trains beside me, I could be in Wisconsin, Indiana, Michigan, or numerous other places in the midwestern United States.

These similarities across borders brought me to Germany in the first place. This summer, my i-Lab team is exploring models of urban innovation around the world for the National League of Cities (NLC). City governments face similar problems the world over. Analogous challenges of housing, mobility, inequality, citizen engagement, and sustainability exist in Cascais, Portugal; Bristol, United Kingdom; and Chattanooga, Tennessee.

“In a country as large and diverse as the United States, cities may have more in common with international counterparts than American peers.”

These thorny challenges resist tidy division into governmental departments and demand new approaches to solve them. Innovation is one tool for local governments to tackle these problems. The narratives of innovation collected this summer through various case studies in Europe and North America, while not universal, may provide salient lessons for other city leaders. The goal of this i-Lab project is to understand what lessons from highly innovative cities can be applied to American cities to increase their innovation capacity.

Although national-level politics can highlight some glaring differences between countries, municipal politics can appear surprisingly similar across borders. As one interviewee quipped: “every city has to take out the trash.” Additionally, national-level politics can blur regional and local differences—in a country as large and diverse as the United States, cities may find that they have more in common with international counterparts than American peers across the country. After all, it is not only the forests that the Ruhr Valley of Germany and the American Midwest have in common.

The city of Dortmund was once a hub for the steel and coal industries, which dominated the region’s economy as recently as the 1980s.  Following the closure of several mines and factories beginning in the 1960s, the jobs dried up. According to one city official, the decline of the steel and coal industries cost the city over fifty thousand jobs. Dortmund desperately needed “Strukturwandel”—structural change.

The transition from a steel-based local economy was enabled by a city government that was forward-thinking and willing to take risks. The city established innovation hubs and incubators that encouraged entrepreneurship and innovation—including in the burgeoning field of nanotechnologies.  Today, the new jobs following this structural change have more than replaced the number of jobs lost just forty years ago, and Dortmund is a world leader in nanotechnologies.

“I am encouraged by the wisdom shared in city halls in Dortmund, Rotterdam, Pittsburgh, Vancouver, and South Bend.”

This mix of industrial past and modern entrepreneurism is prominent in the cityscape of Dortmund as well. A new industrial park, home to start-ups and cutting-edge technology firms, stands in the shadow of the old Phoenix West blast furnace. An old steel factory site was flooded in 2009 to create Phoenix Lake, now a center for housing and commerce. Perhaps most satisfyingly, the region’s industrial museum celebrates and remembers its industrial history in a converted coal plant in nearby Gelsenkirchen.

There is no single pathway to innovation. What proved successful for Dortmund in the late 20th century cannot necessarily be transposed straight to the American Midwest—Janesville, Wisconsin, for example, has unique challenges in the wake of the General Motors factory closure or to Pittsburgh following the shuttering of several steel factories. Even so, I am encouraged by the echoed wisdom shared in city halls in Dortmund, Rotterdam, Pittsburgh, Vancouver, and South Bend.

In a world where polarization dominates the narrative and where war in Ukraine is a painful reminder of violence on a national level, I find consonance and continuity in the local. Across national borders, city leaders are finding ways to break through political noise and continue to deliver invaluable, invisible services that I can no longer take for granted.