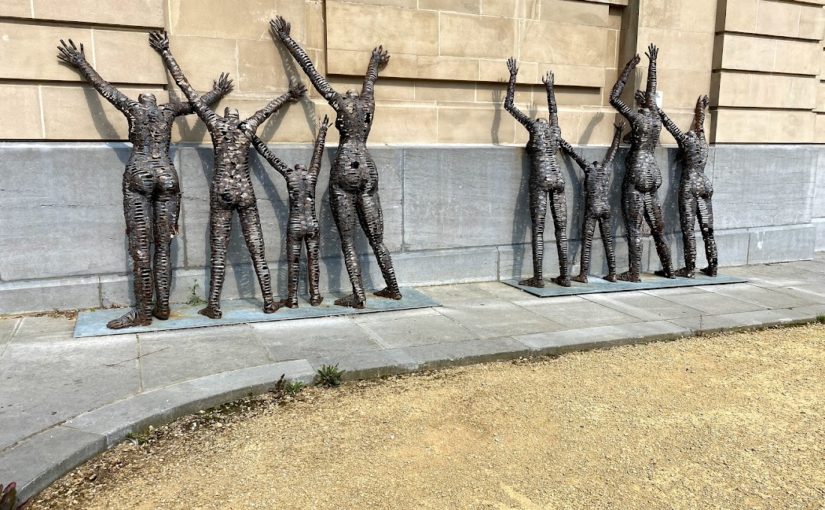 “The worst thing that colonialism did was to cloud our view of our past.”

― Barack Obama, Dreams from My Father: A Story of Race and Inheritance

Old historic buildings, tall gothic cathedrals, ancient marble roads, magnificent Flemish art coupled up with modern infrastructure, and the smell of dark chocolate were just some of the scenes that welcomed me to Brussels, Belgium in the summer of 2021. During my five-week stay in the European country, I was treated to infinite doses of an incredibly rich culture that immersed me in a highly intriguing moment of history. As I made my way through the touristic streets, I would be taken aback by the magnificence of the Art Nouveau architecture surrounding the city. My online research of the city did not do me any justice and I often found myself sidetracked by the hundreds of pictures I took. As much as I wanted to enjoy the present, I did not want to miss anything and, as such, took pictures of everything—from gargoyles to landscape, food, performances, street art, and artifacts.

Among the fascinating places was Grand Place, which had some of the most beautiful buildings I have ever seen. These buildings date back to the 14th century and stood boldly in defiance of time. As I walked through the structures while feeling the walls with my fingers and closed eyes, I imagined what it was like 500 years ago—what the lifestyle and culture were, and how did they dress and interact. I was curious: was there hunger, wars, and crime, and was there mass travel as is today? Just by the sheer age of the ground I stood, it hit me quite vividly that history has proven to be a double-edged sword, sharing our successes as well as our failures and all preserved in monuments around us.

As a student from Africa visiting Europe for the first time, it shocked me to see so much of African culture in Belgium. During my second week, I took the train to the Africa Museum, an ethnography and natural history museum located 8.5 miles outside Brussels. The museum focuses on the Congo, a former Belgian colony, and other parts of Africa such as East and West Africa. While en route to the museum, I knew I would be interacting with African culture, however, the magnitude of the traditional artifacts on display was unexpected. I started the tour with much excitement, embracing the African culture and appreciation, but this feeling soon turned into shock and then anger. Why were there so many African traditional artifacts in a museum in Europe?

“Some of these pieces were obtained by violent or unlawful means.”

Because of colonization, the histories of Africa and Europe are forever tied and although more than five decades have since passed, the effects are enormous. From the religions we hold to the naming of our children, our education systems, and the languages we speak, they all have a hint of colonization. There have been negative effects too—economic instabilities, systemic racism, ethnic rivalries, degradation of natural resources, and widespread human rights violations that we see across Africa years after independence. These realities became very real to me with each room I entered and with every item I saw. It is no secret that most of these artifacts—masks worn by elders and warriors, traditional clothing and weapons, and musical instruments—were obtained during the colonial era and not in the most peaceful of means. In an announcement in one of the hallways, the museum acknowledges the questionable nature in which these artifacts were acquired. They confess that “a large part of Africa’s material heritage is housed in Western Museums or with private collectors” adding that “some of these pieces were obtained by violent or unlawful means.”

This encounter raised several pertinent questions in my mind, among them was, should reparations be made to post-colonial states for atrocities made during colonization and if so, what forms should they take?

There have been numerous debates in recent years about whether European countries should return these artifacts as part of a reparations process. Countries such as Kenya, Nigeria, Benin, Ethiopia, Zimbabwe, and Egypt have, in the past, made appeals to have their artifacts returned. Some European countries have agreed to this but on conditions such as on a loan basis, as was with the case between Nigeria, Benin, and Britain. I must admit that there has been some form of acknowledgment of the need to reinstitute these artifacts, the question though remains—is that enough? It has been shown in research that former colonial masters enriched their countries’ economic and industrial strength through the resources they extracted from their colonies. In addition to natural and human resources, traditional artifacts are just among the many things that were taken.

The Africa Museum noted that it “is currently prioritizing provenance research to ascertain how objects were acquired,” noting that “the museum has an open constructive attitude towards the restitution debate.” Although this shows some willingness to have the debate on reparations, this intent needs to be translated into action.

On this, I say there is a need for both repentance and reparations.

Besides restitution of African artifacts, there has also been a push for reparations that match the level of atrocities committed during colonization. So far, only acknowledgments and very few public apologies have been made. An excellent example was in June 2020 when the Belgian king, Philippe, wrote a letter to the Congolese president acknowledging the “painful episodes” of the colonial era with its “acts of violence and cruelty.” In this statement, Philippe says that he “would like to express my deepest regrets for these injuries of the past, the pain of which is now revived by the discrimination still too present in our societies.” The admission came as a shock as no Belgian monarch has previously made such a statement.

The debate on whether reparations or apologies should be made has been contentious. The main point of debate is the governments and individuals that committed these atrocities are no longer in power and that those who experienced colonialism firsthand are gone. It is from this argument that French President Emmanuel Macron in January 2021 said that there will be “no repentance nor apologies” for its occupation in Algeria but rather they are open to participating in “symbolic acts” that will promote reconciliation. On this, I say there is a need for both repentance and reparations.

But what form should they be in? Well, the first step is education that will allow people, most importantly policymakers, to understand and appreciate the need for it. This would call for an acknowledgment and apology for colonial atrocities. Secondly, reparations do not necessarily need to equate to monetary value (although common) but can also be in the form of radical and justice-driven change, as economist Priya Lukka notes.

There is also a crucial need to make international laws more inclusive through decolonizing principles that obstruct reparations. This would pave way for racial equality and eliminate avenues for discrimination, more so on reparations. It is encouraging to see that there is an ongoing conversation on this topic, which is what is needed if we are ever to ensure justice is achieved for those who were colonized. However, for now, we can start with the return of these African artifacts to their rightful homes.

Top Photo: Statues outside the African Museum in Tervuren, Belgium.