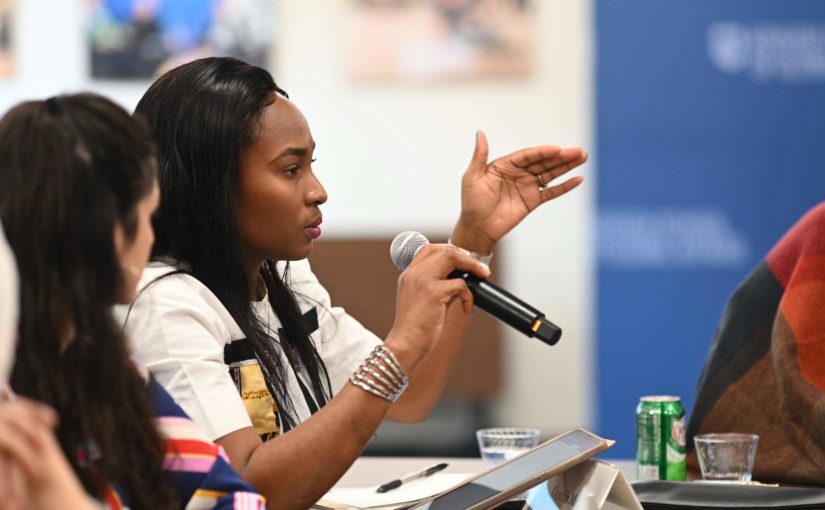 Before coming to Notre Dame, I enjoyed a successful career in social entrepreneurship in Nigeria. Shaping policy was not on my radar until two years ago when I encountered the Nigerian “EndSARS” movement and protest: an outburst of discontent due to social inequality, poverty, unemployment, and bad governance. As my career as a social entrepreneur has begun to evolve, I was inspired to shape policies and become an all-around leader—someone not just informed by basic social innovation concepts, but also driven by a sense of purpose to reduce inequality of access and opportunity around the world.

Thanks to a DC Immersion and Policy course made possible by the University of Notre Dame’s Keough School of Global Affairs and taught by Professor Maura Policelli, I participated in a semester-long, top-notch training course. The highlight of this international development policy course was my visit to Washington, DC, over spring break to engage with policy experts and key actors in government agencies, non-governmental organizations, think tanks, and Capitol Hill offices. I’d like to share 5 main takeaways from my experience in this course.

Five (5) things I learnt about how to effectively shape policies:

Clarify the policy topic you wish to address and conduct research on the policy issue, theme, or system you wish to reform. As much as we care about solving so many global problems, the key to attaining success, as an entrepreneur would, is to zero in on a specific and unambiguous issue. For me, I was perplexed by the unfair distribution of the COVID-19 vaccine throughout sub-Saharan Africa. This life-saving vaccination must be distributed equitably for nations to have safe reintegration into economic and social activities.

Identify who has the power to enact a policy change. A person who can influence your target audience directly or indirectly, such as an advisor, a respected commentator, a media outlet, or a renowned academic. Know the routes to the people or organizations you need to influence and build relationships with them.  In preparation for my policy issue, I drew up a stakeholder map and reached out to a number of important stakeholders and organizations via email and LinkedIn. In particular circumstances, an interlocutor (a person with a connection to the person you intend to contact and who introduces you on your behalf) facilitates the introductions. Professor Policelli acted as my interlocutor by connecting me to key people in the Washington, DC area and proactively supporting me in enhancing the quality of my messages and connection emails. I was able to meet with individuals such as Mr. Robert Nabors, Director of North America at the Bill and Melinda Gates Foundation in Washington and former Deputy Chief of Staff to President Barack Obama. During our conversation, I gained additional insight into how to approach my policy topic.

Be deliberate in building relationships and networking. People are more willing to help you than you imagine, so be bold in your networking efforts. Policymaking is intricate and dynamic,  involving a lot of different people and moving parts. Policy formulation nonetheless has its own formal and informal rhythms. From my understanding and experience, relationships make things work. I have actively engaged in not only building relationships and networks but also actively keeping track using a spreadsheet template I obtained from Erik Oswald (Keough School Career Consultant) and intentionally following up as necessary. You will increase your impact if you collaborate with people, build trust, and develop a joint plan.

First, the three pillars of effective policy advocacy consist of the ask, the target, and the message. Your ask should be very clear and concise, avoiding the use of technical language. Next, consider the types of activities and platforms your audience will engage with most effectively, such as conferences, press releases, and/or social media challenges. Lastly, a successful campaign demands an abundance of creativity and innovation in its messaging. You must therefore surround yourself with the right individuals and invest in your campaign’s messaging and outreach. Know the space and the influencers. Participating in a mentorship session with Subject Matter experts exposed me to some of the most effective policy advocacy and lobbying strategies.

There is no one right path. Plan with an open mind and be adaptable, because influencing policy requires time and effort. Deconstruct your plan and be realistic about what you can do. Frequently, it can be a lengthy process with no immediate impact. But persevere with it. Don’t forget to record and acknowledge the tiny victories. In addition, maintain engagement with your target audience and stay current on the decision-making process.

Taking this course and exploring policymaking processes has equipped me with a solid understanding of global issues, as well as pertinent solutions and expert knowledge in critical areas for reducing inequality and fostering sustainable growth. In this regard, the Keough School of Global Affairs has equipped me to continue my evolution from a successful social entrepreneur to a leader in shaping global policy 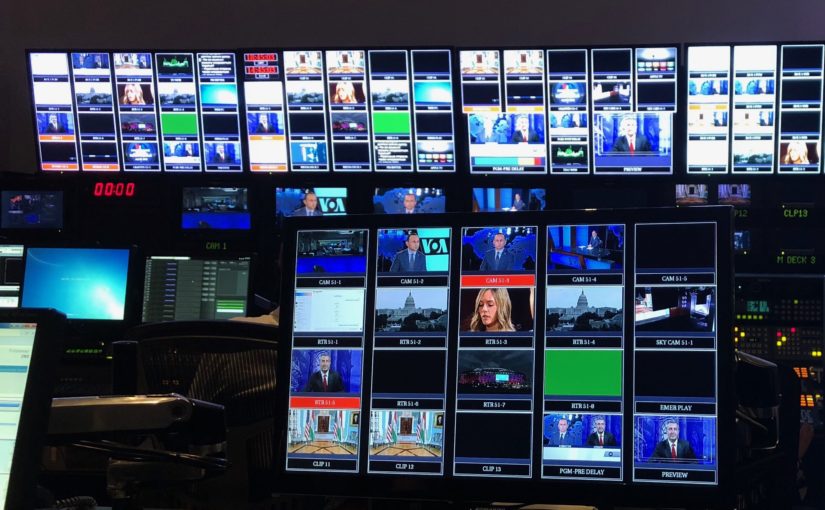 “Civility, respect, and a return to what’s important; the death of bitchiness; the death of gossip and voyeurism; speaking truth to stupid.”

This quote comes from HBO’s The Newsroom, the best TV show about journalism in my opinion. Six years ago, when I started watching the very first episodes of The Newsroom, I had not even embarked on a journalistic path, but I was impressed with the inner world of the journalistic profession as described by writer Aaron Sorkin. This world was about truth, credibility, and respect, three goals that I strive to pursue in my career.

Trying to find a perfect field placement to study ways of resisting Russian disinformation and propaganda, I focused in on international news organization Voice of America (VOA). According to its charter, VOA’s purpose is “presenting a balanced and comprehensive projection of significant American thought and institutions.” For the last 76 years, VOA has produced content in more than 40 languages. Luckily for me, combating disinformation is one of the principles of the VOA’s day-to-day work. VOA was founded during World War II to combat Nazi propaganda through unbiased and accurate journalism, and today, with the rising of a new propaganda evil and ongoing information wars, it’s probably the second most important time in the VOA’s history for the organization to live out its mission.

I have spent some time (ok, too much time) trying to figure out the format of this blogpost. But, as you may observe from its title, I focused in on one day in the life of the VOA’s Ukrainian newsroom. In the best tradition of VOA’s blogs, I’ll try to keep this blogpost short, but thoughtful. So this is a 4-minute read. Let’s get started! 8:30–9:00 a.m.: The bright and totally over-air-conditioned office is filling up with journalists. I have a feeling that coming from Eastern Europe, I can adapt to everything except AC levels in the U.S.

At the entrance of the federal building, employees are welcomed with John F. Kennedy’s quote: “The Voice of America…carries a heavy responsibility. Its burden of truth is not easy to bear.” Meanwhile, the building itself has five stories above the ground floor. The last one is a mess of hundreds of studios and broadcasting rooms where one can get lost. 9:00–9.30 a.m.: Normally you have two goals for this half hour: you need to find a story (if you haven’t found one yet) and stay caffeinated.

Web journalists are looking for the stories to be published on the website, TV journalists are choosing topics which will go on air after less than 5 hours, so time is ticking.

Summer is a perfect time for most of the interns to fill the gap and show what they can do while staff members are on vacations and VOA might need your help more than any other time. Since the very first day when I finished my paperwork, I’ve been treated as a full journalist, working five days a week from the first cup of coffee in the morning to the time when the work is done. I feel lucky that I have had a chance to participate in every single level of content production. From browsing the servers and watching incoming news feeds, to doing in-depth research about the most important ongoing investigation in the United States, from providing a voice-over for someone’s soundbytes and on to spotlighting disinformation in Ukrainian media.

During the editorial meeting, you have a few minutes to pitch your story, answer tough questions, and prove that the story is worth the team’s time. If the topic is strong enough, after the editorial meeting you will start working on content production, trying to meet the deadline. The deadline is everything. Deadlines differ for different stories, but for web news stories (which is most of what I write), the deadline is always “now.”

These 4.5 hours are really varied for the different teams in our newsroom. TV journalists are working on their stories for the air and content and video editors are trying to make these stories look perfect. Someone is often in the field, shooting new content. Someone is adapting Reuters or Associated Press stories. Someone is making voiceovers. But at 12:00, it usually becomes hot. You must be on time and you must produce meaningful content with broadcast quality sound and picture.

The web team normally has a reasonable time to publish news articles, but it’s breaking news, it’s all about time. You can’t wait, you can’t hesitate, and you can’t be slow. After just a couple of minute,s the story may lose all its value. But even in breaking news situations and even if you are a journalist with 10 years of experience, you cannot press the “publish” button without your editor or another person in the office fact-checking and proofreading your story. This is how you earn your audience’s trust. It’s the most stressful time of the day for editors, journalists, and producers. Everyone feels equally responsible for any problem that arises. When the hosts and the producer are going down to the studios, anything can go wrong: equipment isn’t working, the picture freezes, the network connection is slow. But, at the moment the anchor says, “Good afternoon. This is VOA Ukrainian’s daily show, Chastime,” usually everything flows as it should. None of the viewers can feel the tension on the other side of the blue screen. No one except an intern, who now feels more engaged than just a regular observer.

When the most stressful part of the day is over, both for the TV and web teams, you have time to work on your in-depth articles, feature stories, and anything that does not fit under the deadline “now.”

During the first month of my internship, I mostly worked for the website, producing analysis, news pieces, and infographics. I covered the topics of Russian meddling in the U.S. elections, Kremlin disinformation and hacking attacks, and the Mueller investigation. And a solid multimedia story written by me about the Ukrainian side of the Russian interference investigation was recently published.

But I guess my 4 minutes are over for now, right?