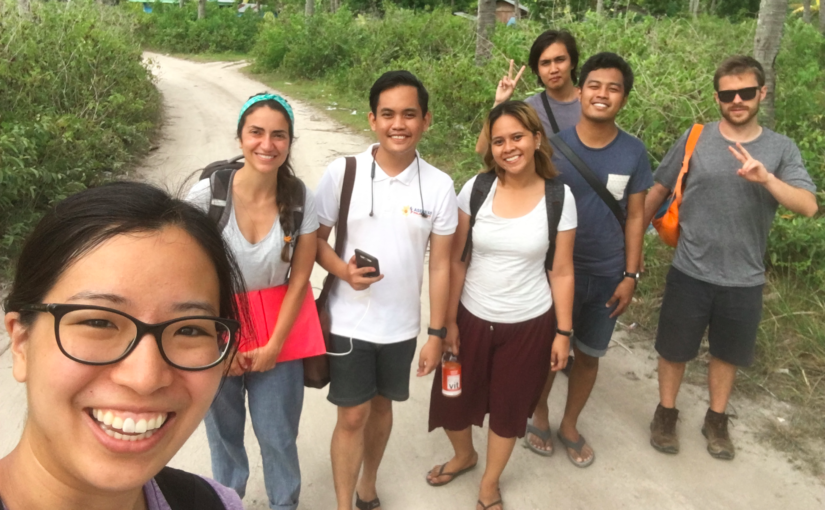 Master of Global Affairs student Jenna Ahn is working with teammates Steven and Juanita, in partnership with the Terwilliger Center for Innovation in Shelter at Habitat for Humanity International, on a project to design and test a pre-crisis market analysis toolkit for the shelter sector. A better baseline understanding of local markets can guide both pre-crisis programming to build resilience and post-crisis interventions for shelter in sustainable and scalable ways. The team spent two months in Cebu Province in the Philippines conducting interviews and gathering data.

“Hello mamser!” We turned around to see who was calling us with what came to be my favorite gender neutral and delightfully formal Filipino greeting.

It was the woman we interviewed earlier that day. She was grinning and waving at us.

As we continued on the dirt road, we encountered other familiar faces from our previous interviews: a husband and wife at dinner who greeted us, counter managers at neighboring hardware stores, and a few friendly nods in the street. We were a motley crew—four Filipinos, two Americans, and a Colombian—and I assumed news of our arrival had spread through the small neighboring barangays of Santa Fe and Pooc. In just five days conducting over 70 interviews, we were still very much foreigners, but I couldn’t help feeling that in our five days in Bantayan Island we had glimpsed a tiny part of the integrated ecosystem of the shelter market.

We had planned to track the supply chain backwards: from households accessing the local market to reconstruct their homes to the hardware stores, construction laborers, and NGOs who aided them in the process. While a relatively linear strategy, our interviews elicited a much more complex reality of relationships, motivations, and obstacles that left us with more questions than answers. What follows is a brief snapshot of just a few of the people we met along the way. *

Despite the blaring speakers next door playing “Despacito” on loop, Ma’am Castillo was calm and thorough as she told us her house was the only one in the neighborhood that had survived Typhoon Yolanda in 2013. It wasn’t because her house was particularly durable, she admitted— her house was a mixture of recycled plywood, woven bamboo, and corrugated iron—but because her family had been the only to remain in her neighborhood despite the evacuation warning so God had protected her. She had tried to make some improvements to the house, but her limited budget and compounding loans made things difficult, especially when the price of materials and construction workers skyrocketed after the disaster. How was she supposed to hire a skilled mason if NGOs were willing to pay their masons 150% of the pre-typhoon daily rate?

Around the corner at a construction site, we met with Cuya Jason as he took a short break from laying concrete blocks. A hardworking mason and father of four children, Cuya explained that he had learned his trade by shadowing his father as a helper, and eventually took on the title of mason himself. After Typhoon Yolanda decimated many of the homes in his community, Cuya helped to rebuild using the same construction techniques used before the typhoon. He hadn’t changed his building strategies, but why would he? He did what all the other masons did, and ultimately they were all limited by budgets. If anything, Cuya had to explain to households that forgoing reinforcing steel bars altogether would be unethical. When asked if he would be interested in training workshops to improve his trade, Cuya smiled—perhaps assuming I was searching for a “yes”—and shook his head. Maybe, but he didn’t have time and couldn’t lose out on his daily wage. After all, he needed to get food on the table.

I stood at the counter of RJ’s Hardware and I could tell Até Maria was still convinced that we might sell her business secrets to the other stores in town, but she spoke to us anyway. Like any good business manager, Até closely observed changes in customer behavior and demand when ordering stock. It’s not that she wanted to sell substandard materials, she said matter-of-factly, but it’s what the people could afford. It’s what they wanted. She hoped another typhoon wouldn’t hit the community, but we both knew that it would significantly benefit her business.

We interviewed many others along the way—some with similar stories and still others with different experiences. Ultimately, we found that 60% of households we spoke with did not believe their house would withstand the next climate disaster. And though we must acknowledge there are no easy solutions to the fragile and interconnected relationships within the shelter market in places like Bantayan Island, I do know that the need to act now to benefit people like Ma’am Castillo, Cuya Jason, and Até Maria is central to a commitment to human dignity.

In the end, a home is not simply four walls and a roof where families are forced to live in fear of devastation. Lives are not worth saving only after inevitable climate disasters strike. If we take seriously the Keough School’s mission towards integral human development and protecting the inherent dignity of all persons (especially vulnerable persons), we must work before the next disaster to increase access to dignified housing.

*all names have been changed for confidentiality