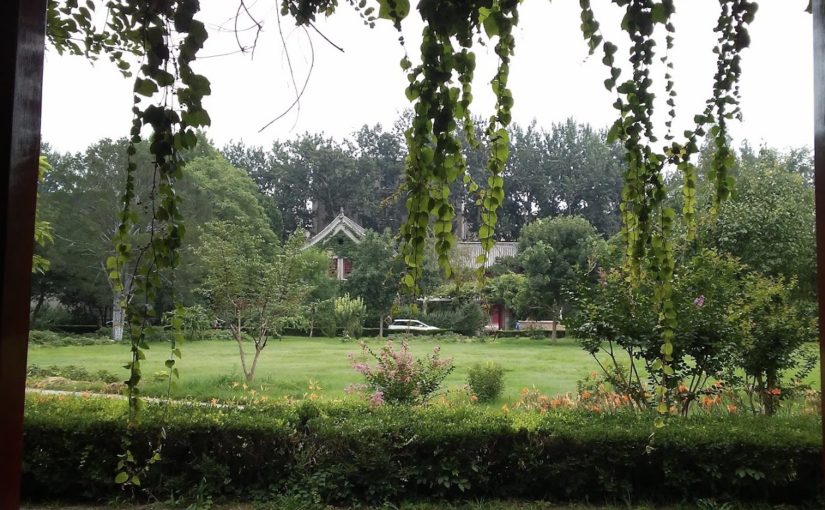 I was reassured that Beijing’s air pollution would be more manageable
in the summertime. The first morning, however, I was surprised by grimy gray skies and a horizon hazy with pollution of ambiguous origin and nature. Even nearby buildings were partially obscured from sight. Here, blue skies are a rare occurrence.

Initial excitement for life in a truly different city began to wear off as I started to fall into the routine of the summer program. Nearly non-stop studying was becoming increasingly wearisome, and the constant gray sky was just starting to get to me when one day, I took a wrong turn and found myself on the edge of the gardens around PKU’s Weiming lake. Most of what I had seen of the campus was gray buildings, gray sidewalks, and funny gray trees, so turning the corner to suddenly walk right into gardens overflowing with green was a most pleasant surprise. It seemed almost like a green jewel right there in the heart of PKU (locally known as Bei Da). The gardens are well kept but not overly structured, and diffe rent parts of the park have grown and developed in their own way, just as they were not originally designed or created uniformly. The buildings I first saw are wrapped in ivy that climbs freely up the brick walls and over the edge of the traditionally curved, ridged roof. Windows with frames painted in the classic Chinese red peep through the ivy and slender trees sway above the roof. Bushes growing all around the buildings stretch up the walls and conceal most of where wall meets earth, so the buildings seem to have become part of their natural surroundings. Small pathways wind in and out of monuments, wander down between cool wooded areas and moon gates, eventually taking you around to the lake. Everything seemed so very alive and growing.

This oasis of green in an expanse of gray concrete was a remarkably refreshing break from crowding atmosphere of urban life. As I made my my way further in, others were also taking their time strolling along the pathways and enjoying the natural charm of the gardens, giving their attention to their surroundings rather than their phones. Many families seemed to be just wandering around the lake, reminding me of my own family’s fondness for walks around the canal in my hometown. I took my time following garden paths wherever they turned, appreciating the lull in the typical racket of Beijing. And then, just as I walked out of the bamboo garden back into the open space, the cloud of pollution thinned and the blue sky was again visible. Sunlight reached through the hole in the clouds and brightened the already rich colors of the gardens.

My walk around the lakes showed me a little more of the ways in which modernity and tradition thrive together in China. Formerly the site of Qing dynasty imperial grounds, PKU’s imposing modern architecture seems to be its most visible characteristic from outside campus. There is, however, a regard for tradition and history alongside this emphasis on modernization, partially expressed in the care for the traditional architecture and the surrounding grounds inside the campus. My name is Chaya Cassell. I am a sophomore from Indianapolis, Indiana and I live in McGlinn hall here on campus. Currently, I am in the Program of Liberal Studies with Chinese as a supplementary major. My studies in both these areas actually began a while back when my parents decided on a classical curriculum for my education. I learned Mandarin Chinese on and off from a variety of teachers, including my mother. In high school, I developed a deeper interest in studying Chinese and decided to make it more of a focus at Notre Dame. Outside of my studies, great books, long course meter training pools, and deep conversations fascinate me and bring me the most joy. View all posts by Chaya