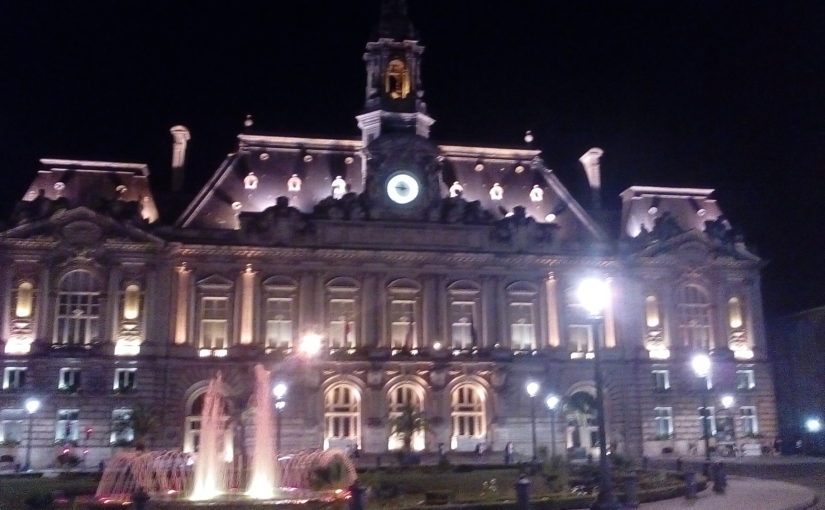 The composition of this third post was delayed due to a series of unfortunate traveler’s errors. I experienced a minor crisis last week due to both of my debit/credit cards experiencing issues and having only 10 Euros left in my wallet. The issue occurred because of a problem with the online security system of the major transportation provider in France, SCNF, which denied both of my cards when I attempted to use each one in turn to purchase a train ticket back to Paris for my return flight. The credit card companies then placed a block on my cards, leaving me a very poor student in a very bad situation. I used my remaining 10 Euros to purchase a French SIM card and a small number of international minutes, only to have the most frustrating series of phone conversations with customer service representatives of various countries.

My very cheap cell phone plan cannot, it turns out, call American numbers directly, despite ostensibly functioning as an “international” phone service. In spite of this difficulty, and in a moment of desperate intrepidity, I discovered that I could work my way through the international phone directory of Mastercard and have myself transferred from department to department until I found the one that could help me. Unfortunately, this elaborate series of maneuvers required that I explain the situation afresh each time I was transferred to a new department. Eventually, around the third or fourth transfer, I developed a script which I then delivered to each new representative that sounded quite a bit like a hold-up at a bank: “Listen, don’t speak, just listen. I have a problem that you can’t resolve, but I know someone in your company can. I am going to calmly and quickly explain my situation to you, and you are going to transfer me to someone who can help. No questions will be necessary.”

Upon reaching the final transfer to the specific Fraud & Security subdepartment that I needed to reach, I was unceremoniously disconnected from the line– I cannot say whether by accident or design–and found myself at an even deeper impasse. The situation has been temporarily resolved thanks to the even more intrepid efforts of my mother, who devised a way I could use the second card by corresponding with her through email while she spoke with a Visa customer service representative. This method is, in a word, inconvenient, but it did the trick well enough for me to buy the necessary train ticket.

All of this having been said, I am happy to report that conversations with my host family and other native French speakers have become more involved in the past two weeks. My classes at the institute reinforce my ability to speak with my host family, and my experiences speaking with my host family reinforce my ability to understand French better in my coursework. Even an activity as simple as listening to my host parents discuss French politics helps me learn the internal rythms of native French speakers. The French utilize a number of verbal tics which are essential to almost every French conversation, even short ones. Par exemple: “Alors,” “En fait,” “C’est ça,” “D’accord,” et “Voila!” Each expression has its proper place, and I am beginning to learn the nuances of each word in relation to a proper French conversation. For instance, I am just beginning to break my American habit of saying “Ok,” or making the sound “hmm” when expressing interest in what has just been said, when I should be saying “D‘accord.” Any language learner knows that there is a real difference between knowing a rule or a specific utilisation of a phrase, and using it correctly without effort. I hope that I am beginning to reach that point with certain French expressions.

Last week there was a Fête de La Musique at Tours, an event where bars remained open until 2 am on a weekday (rare in Tours) and different musical groups played music throughout the night in separate locations. It seems that summer music festivals like this are common to every French town of a certain size. The roads were blocked at a distance from the festival, and drinking in public was common. All of the images in this blog post are from the Fête, including the leading image of Le Palais de Justice lit up at night for the Fête.