I can hardly believe that I am writing this, but today marks the end of my first two weeks living in Paris and studying at l’alliance française. Time has flown by, which I suppose is a good thing because it means my days have been filled with exploration and learning, but I do hope things slow down a little bit so I can absorb all that is happening in my life before making the trip home to the US.

This week has been an especially interesting one, as the French partook in the first round of the legislative elections, which confirmed that Macron will most likely have the majority he needed to be an effective leader. While the results were not surprising (and thank God, I have had enough of political surprises….), it was still incredibly interesting to view the French political system for not the first, nor second, but THIRD time this year. As a Political Science student, I could not have picked a better time to be in France as I have been able to watch the elections from a unique perspective. In my class, we spent an entire day debating the merits of each prominent French political party. However, we were randomly assigned the party that we would debate in favor of…. Being a relatively hardcore leftist, I was naturally assigned le Front National (the party of Marine le Pen et co.). What was interesting about this exercise, though, is that we were able to cross so many different disciplines in order to practice our oral french: politics, philosophy, french, ethics, history, etc. The activity also allowed for us to ask our professor questions about her experience as a French person during these elections, which was an interesting insight in the political mind of a Parisienne. This small activity sums up my experience thus far with my classes. The Professor is incredibly forward thinking, and is not afraid to try out different activities even at the risk of a failure. I have found her style of teaching the most effective that I have ever received in the subject. This experience has been exactly what I needed in order to cement the huge progress that I have made on my French within the past year.

In terms of city visits, I thought that I would stick to the political theme (even though in my last blog post I promised a review of Paris’ best book shops… that’s to come, I promise!) I spent Wednesday walking around the center of Paris, making stops at the National Assembly, the Senate, and the Hotel de Ville (the home of many city departments). These visits were super touristy, filled with people, sweaty, but so amazing. After my yearlong experience watching and learning about French political systems, it was so cool to be able to finally see the buildings where the 5eme Republique operates. Below are some pictures of the things I saw! 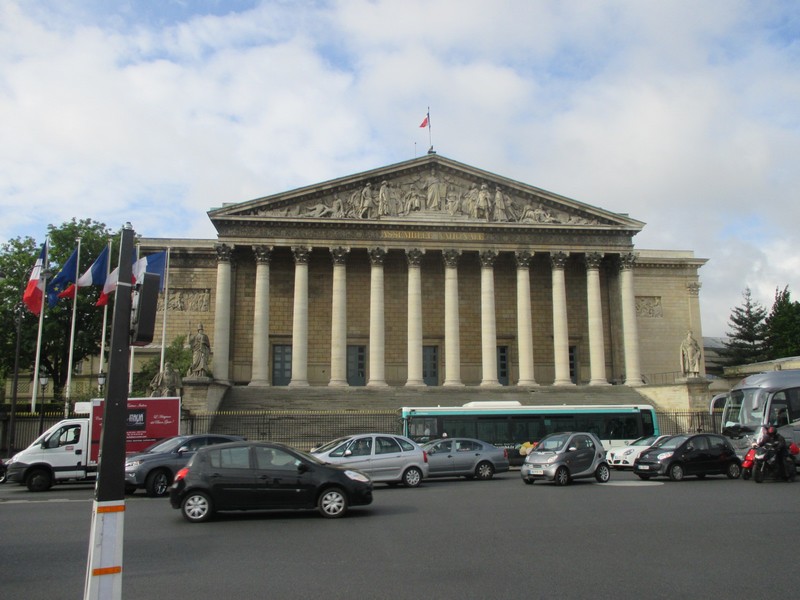 The Senate (why does it look like fall / spring you ask? Okay, so yes I got this image from google… none of mine did it justice… you caught me),