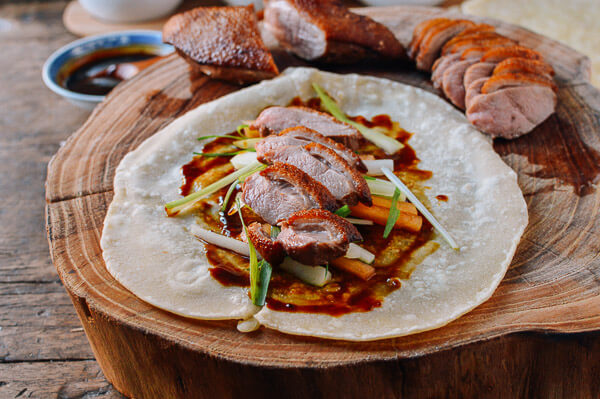 After our first full week of study here in Beijing, we were treated by our teachers with Beijing’s most well known cuisine. To reward us for making it through our first test, we were taken out for lunch to a wonderful restaurant to finally try Beijing’s famous Peking Duck.

Peking Duck originated in Beijing and has been around since the Yuan Dynasty, but became much more popular in the Ming Dynasty when it was often served as a main dish for imperial courts. The dish wasn’t introduced to rest of the world until a restaurant called “Quanjude” developed a way to more conveniently hang roast ducks. Since then, Peking Duck has been a popular favorite among Beijing locals as well as for others around the world.

White feathered Pekin ducks are bred and raised for the popular dish and are roasted in closed ovens or hung ovens. They are glazed with maltose syrup and roasted until they turn a shiny copper brown shade. I learned that it is very important that the duck is to be roasted in an oven because it allows for the meat to be slowly cooked and gives the duck its distinct flavor.

Peking Duck is often times served with Chinese pancakes and fillings so it can be rolled and eaten. With our serving of pecking duck came Chinese pancakes as well as bean sauce, a form of honey mustard, radish, cucumber, sugar, and spring onion. All the toppings can be put together in the Chinese pancake to make a delicious meal.

Stemming from its important history, Peking Duck remains to be a staple in Chinese cuisine. It is great for ceremonial celebrations but also an option for any meal at any time. Withstanding the test of time thus far, it is clear that Peking Duck will continue to be a popular dish for many times to come.