To my initial sorrow as a sweet-tooth, I found that in the East, dessert is a minor affair and sometimes is even completely passed over. Traditionally, sweet items are lesser players in the world of Chinese eats. Northern China in particular is known more for its preparation of meats and noodles rather than desserts but Beijing has more to its culinary name than roast duck. To my intense joy, halfway through the program, I discovered the Daoxiangcun (稻香村) company, which roughly translates to “village of rice fragrance”, one of Beijing’s oldest and most famous pastry companies. Daoxiangcun pastries are unique to Beijing; there is a different Suzhou Daoxiangcun company, but these pastries apparently cannot be found in Hong Kong, and even in Taiwan, people are not as familiar with them as in Beijing. Daoxiangcun is known for its mooncakes, which are a traditional dessert of the Mid-autumn festival, also called the moon festival. However, Daoxiangcun’s most popular products are its wide assortment of traditional pastries, and are eagerly bought up by Beijingers year-round. These pastries, which come in hundreds of varieties, are quite popular with the older folks, but people of all ages enjoy them. The company also sells a variety of cooked meats.

I visited several Daoxiangcun stores, and it seems that most are set up generally the same way. At the counter, you may choose from a wide range of pastry boxes, but you can also pick which pastries you want to put in your own, custom-made box. Some stores have several separate counters for meat, pastries, and other sweets. Set up in the center of the store is an assortment of individually wrapped candies, dried fruit and other uniquely Chinese sweets. If you’d like to try specific pastries without having to buy a whole box, you can also order them individually at the counter. It’s a heaven of goodies with something delicious for just about everyone.

I went to a Daoxiangcun bakery just a ten-minute walk down the road from our quarters at PKU to buy some pastries. I had visited the store before, and they had had prepared boxes of daoxiangcun pastries laid out on the counter. But this time, there were no such boxes, no one knew a word of English, and the only thing I could read were the price tags, so I had to figure out how to order pastries with my limited Chinese. I had no idea where to begin with ordering pastries (there are literally hundreds of options), I decided to befriend the staff and ask a few questions. Communication was a challenge; thankfully they seemed to understand me quite well but I had trouble making out exactly what their responses were. I went ahead, however, and started out with asking about the process of making daoxiangcun pastries. The staff informed me that the Daoxiangcun bakery company sends the pastries to its various branches around the city. And, it turns out that the company is a bit secretive about the process of making the pastries, so the staff did not know too much about the process, or even the length of time it took to make the pastries. So, I just talked with them a little about which pastries were especially delicious, and which are most popular.

One of the ladies was said that her favorite Daoxiangcun product are their meat products, and said that the pork was especially good. When I asked her if she had any favorite pastries, she said “They’re all great to eat!” The other staff member I talked to was very friendly, and gave me more specifics, but my limited Chinese made it rather difficult to follow. I did manage to catch that she enjoyed more traditional selections like the round lotus pastries. After she finished rattling off an incomprehensible list of “top ten” pastries, I decided that it might be better to get up to the counter and get a visual on what she was talking about. I explained apologetically that I really had no idea what any of the pastry names were, but was looking to order a box of pastries most unique to Beijing. To my surprise, and delight, she offered to help me order. The twelve types of pastries I ordered included pastries in shape of shells, pig heads, and flowers. Some were a little salty, others were very sweet, some were light and flaky, and others were very dense. The fillings ranged from jujube, to pumpkin, to red bean, to chestnut. I also learned from a few Beijingers that these pastries also play a role in social interaction. Like mooncakes, many pastries symbolize long life, good health, prosperity, or happiness, all of which are very important in Chinese culture. These often have characters marked on them.

The Chinese seem to prefer more subtly sweet pastries such as the jujube flower cake and the ox tongue pastry, but my personal favorite is the almost overwhelmingly sweet golden pig cake. It contains a dense pumpkin filling, is shaped like a pig’s head, and tastes even better than it looks. I suppose I’d really have to agree with the first lady I asked about daoxiangcun; you can’t really go wrong with any of them. 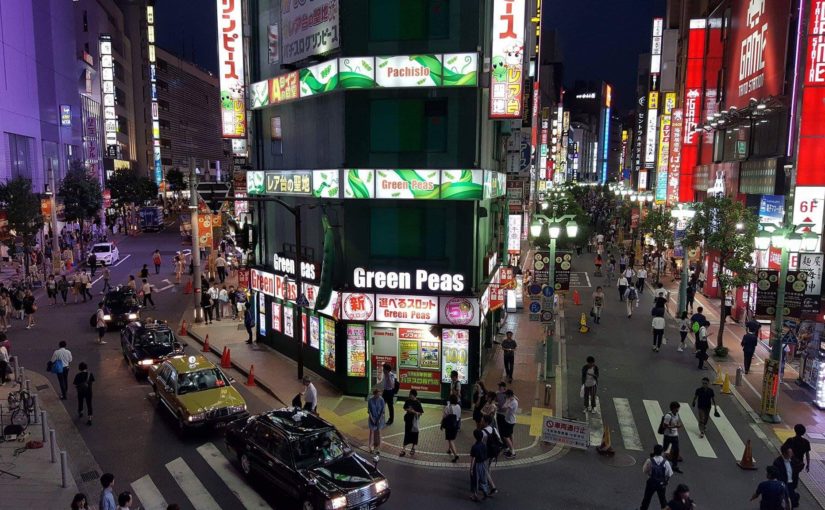 Or, if we’re being a bit more precise, I’ve been here for two weeks now. Flying in to Tokyo was one of the most pleasantly overwhelming moments of my life. Navigating international travel, currency exchange, and Tokyo’s intricate train system for the first time was challenging, though who can complain about flying on a BB-8 plane? My experience has been a mix of that daunting challenge and sense of wonder, so it’s taken me a while to finally sit down and write about it all.

Quite a bit has happened since my arrival, so I will split my first two posts between the liveliest points of my stay thus far: city life and campus life. This first post of mine will center around the city life and attempt to give a worthy summary of my experience. My friends and I have crawled the various sections of this vast metropolitan monster numerous times now, and it’s left a lasting impression with me.

As of July 20th, I have been to Shinjuku, Asakusa, Shibuya, Akihabara, Ikebukuro, Musashi-sakai, Mitaka, and, of course, the International Christian University. A lot, I know. I owe my travels to the wonderfully affordable Tokyo train system. I can’t imagine there’s anything quite like it. Once you become accustomed to the lay out of the city, the large swaths of people, and abandon the ticket system for a much more convenient Suica or Passmo card, the train system becomes your very best friend in Tokyo. This is a somewhat strange thing to rave about, but my hometown, Houston, has little in terms of public transportation. South Bend has a more extensive bus system. So, from my perspective, the train system is a work of modern ingenuity, even if it’s as common as morning coffee for the denizens of Tokyo.

Another dazzling sight is the sheer size of the buildings in major shopping centers. Everything with the exception of large crosswalks and certain roads are much narrower than what I’m used to in the States. Due to the ground space being narrow, when you go to your large department stores, expect to look up. Way up. Some companies capitalize on this architecture in fantastic ways. The picture to the right is TOHO Cinemas and its overgrown guardian turtle. While not every establishment is wonderful enough to warrant this protection, it’s common to see giant screens playing advertisements or banners that are multiple stories high. You’ll see a lot more of that in my later posts.

So what other general impressions do I have after two weeks in Tokyo? Shopping and food. I could easily write an entire post about each of these, but I’ll try to limit myself to one paragraph each.

Tokyo shopping is… Vast is perhaps the best word I can think of at the moment. You can find just about anything in the sprawling city. Sometimes, all in a single building. You might spend an hour browsing on one floor, head toward the escalator to look for a certain type of goods, and then discover nine other floors to search through. Sometimes more. Window shopping is fun in and of itself simply because there is so much to see. Often prices will be absolutely reasonable, and the more populated and popular areas are often tax free hubs where simply presenting your passport will exempt you from tax on anything over 5,000 yen (about fifty dollars). And, of course, plenty of areas are packed with people.

Now for the food. This could easily be my favorite part of living in Japan. I’m not a foodie or anything, but you really can’t beat the prices on food here. For 650 yen you can get a meal similar to that depicted on the right. And these meals aren’t McDonald’s quality “food.” They are delicious, (probably) nutritious meals that are very filling. No questionable quote unquote meat. No extra four to five dollars for leafy greens. No two dollar bottles of water. You can buy fairly large bottles of water at a supermarket for less than 100 yen and bottles of tea for a comparable price. It’s simply wonderful in my opinion. It helps that I love washoku or Japanese cuisine. I’ve also become accustomed to using chopsticks for anything and everything. Rice, the floating bits of miso soup, salads, and even chips. Yes. I’m very proud, thank you for asking.

So that’s Tokyo the city thus far. These are all the most general of impressions, but I hope to share more specifics later down the line, because I’ve already had some great times in the various sections of the city. However, that will have to wait. Next up is ICU campus life.

Jyaa ne! Until next time! The foul-smelling King of Fruits,
the durian, is in peak season here!

For some, the durian’s pungent odor is fragrant and sweet, but to others, its smell is closer to old gyms socks, turpentine and onions, sewer gas, or rotten cheese. It’s a beautiful, yet mean looking fruit and it is truly tied to Thai identity!

There is an art to picking a good durian. I often watch people hunting for their perfect durian. Similar to a car accident or NYC breakdancers, it’s hard not to notice the frenzy and excitement that happens around durian stalls. People intensely inspect the stems and character of its outer layer. The spikes are felt for firmness, the skin mustn’t have dark spots, the smell must be sweet… When one knocks on it, the sound must be right. And then, the fruit seller will split it open very carefully. It’s inside flesh must be somewhat firm, not too mushy or yellow. Finding the perfect (or not-so-perfect) durian can mean love or disgust for this fruit – am I am on the prowl!

Airports, hotels and other public places sometimes ban the fruit because of its strong odor. A Thai scientist has even invented an odorless durian!

*This post was inspired by SLA’s community task, to find a food that is unique to Thai national identity.

Quick summary of the week: