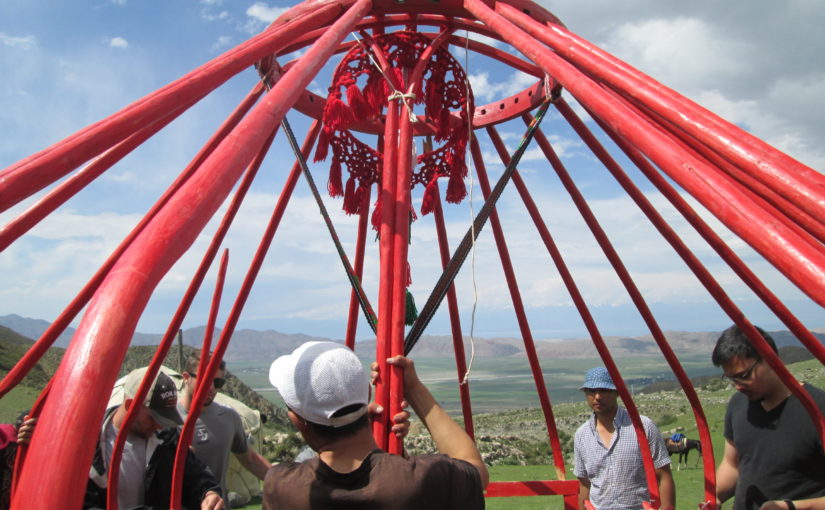 Last weekend, I took a trip via my language program to the famous lake Issyk-Kul and there learned about yurts, the traditional houses of the Kyrgyz people. Yurts (Russian: юрта – ‘yurta’; Kyrgyz: боз үйү – ‘boz uiu’) are nomadic dwellings that are portable: they can be built in under an hour and taken down in half that time. Yurts come in different sizes: some can fit a hundred people inside and others, such as the one that I helped to build, can house three or four people comfortably. The yurt which I built with the other American students and our Kyrgyz peer tutors required 30 minutes to build and 15 minutes to take down.We built the yurt at Kyr-Tash, near lake Issyk-Kul.

While we were building the yurt, I asked the owners of the yurt, who live at the base of the Tien Shan mountains every summer in their own yurt, about the construction process. The conversation was rather difficult, as the names for the pieces of the yurt are in Kyrgyz. It was interesting to observe how the bilingual, native Kyrgyz speakers mixed the two languages (Russian and Kyrgyz). However, at the same time, understanding the instructions was extremely easy, as many of the instructions were non-verbal: for example, someone hands you a piece of wood and points to where it goes. Using context clues helped me understand a lot of the more complex verbal instructions and I was able to practice my vocabulary for building, receiving, and giving and to observe colloquial norms for quick commands and requests.

For this blog post, I decided to write a step-by-step process of how to build a yurt, with pictures! This is not a thorough instruction manual on how to build a yurt, as some minor steps have been left out, so please do not use it to try to build your own yurt without help! Where I knew the original Kyrgyz name of the piece, I wrote the name in parenthesis.

1. Put up the kerege walls (кереге), securing them with tension bands called ‘ormok‘.

3. Connect the tunduk (түндүк) to the walls by placing roofbeams called ook (ууктар) into slots in the tunduk and then tying the other end of the ook to the kerege. Note: this step requires at least five people: one to hold up the tunduk and four to secure four (one each) ook to the tunduk and kerege so that the tunduk will stay aloft while the other ook are secured. Note: appreciate the chamgarak (чамгарак), the cross-beams in the tunduk that give the entire structure support and are featured on the flag of Kyrgyzstan.

5. Secure the ook with ormok.

6. Use one of the remaining ook to attach the felt door, called the ‘tunduk zhabuu’ (түндүк жабуу) to the structure, above the door frame.

9. Place felt shydrak mats on the ground to create the floor of the yurt, hang ayak kap pouches on the walls to serve as shelves and drawers, and place other necessities and comforts inside the yurt.

10. Enjoy life as the nomadic Kyrgyz did!

Note: when taking down the yurt: remove every other ook and use two of those ook to hold up the tunduk until all of the ook are removed, so that the tunduk does not become unstable and fall, damaging the tunduk and ook and potentially hurting someone!

The construction and decoration of the yurt is rich with symbolism and tradition. For example, each of the felt blankets and rugs is decorated with a pattern that represents a real-life item which in turn symbolizes an abstract concept. For instance, a common design represents rams’ horns, which symbolize wealth. Additionally, the yurt is divided by gender: males and females assemble different parts of the yurt and the interior of the yurt is divided into the women’s half (the right side) and the men’s half (the left side) with the middle acting as a common area for eating, drinking tea, and socializing.

Before Soviet times, during the warmer months, the nomadic Kyrgyz would disassemble, travel, and then reassemble their yurts many times. They would remain in one place for the cold winter months, and then disassemble their yurt and move again. During the Soviet era, many Kyrgyz moved to the cities and abandoned the nomadic way of life and the yurt along with it. In the modern day, however, yurt-building has been revived and many people purchase and live in yurts, some to vacation and some as a way of life, returning to the traditional way of life of the Kyrgyz people.