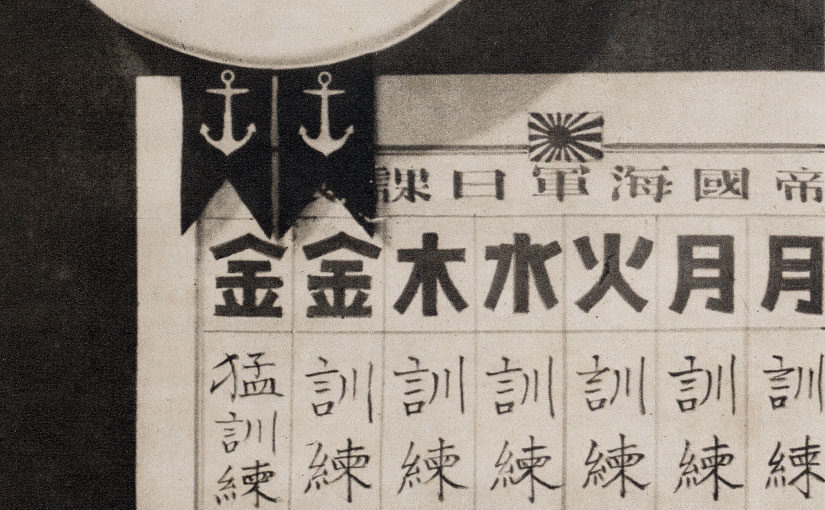 The book, The Dignified Appearance of the Imperial Navy (帝国海軍の威容), published on December 8, 1942,  provides an insight into the Japanese WWII military point of view.

The first chapter, the “Basics” or the “Foundations” (基礎篇), describes in detail how, in 1941, the Japanese Navy prepared its preemptive strikes against the United States and the Pacific colonies of the former British Empire.

On the chapter title page is the seamen’s weekly schedule. “Training” is planned for every day of the week; There is neither Saturday nor Sunday, but two Mondays and two Fridays.

The second chapter, the “Outcome of the War” (戦果篇),  presents a panorama of images of Hawaii, Malaya, New Guinea, and other targets in Southeast Asia, shortly after bombing by the Japanese planes. The photos were not intended to be realistic or artistic. Nor do they appear to attempt to “entertain” or “thrill” their audience, as today’s “war pornography” does. Seen from the distant sky, the smoke shrouds the ongoing destruction below.

For the Japanese at the time, these images likely evoked a sense of pride and superiority, and promoted a worship of the Navy, its weapons and machines, and especially of the provider of those weapons: the emperor. These images were meant to “promote unity, suppress individuality, defend hierarchy, and still dissent.” (See “Revolution by Redefinition: Japan’s War without Pictures,” by Julia Adeney Thomas, in Visualizing Fascism.)

In the preface, there are various references to “sound”:

“Breaking the thirty-years’ silence, early in the morning of the eighth day, the Japanese Imperial Navy briskly woke up and raided Pearl Harbor of Hawaii…”

“The spirits of the Japanese Imperial Navy, reinforced by iron-like silence and bloody training, were released, and finally shed a brilliant light above the world.”

“The photos included in this book respond to the emotional cheers (voices) of 100 million Japanese citizens.”