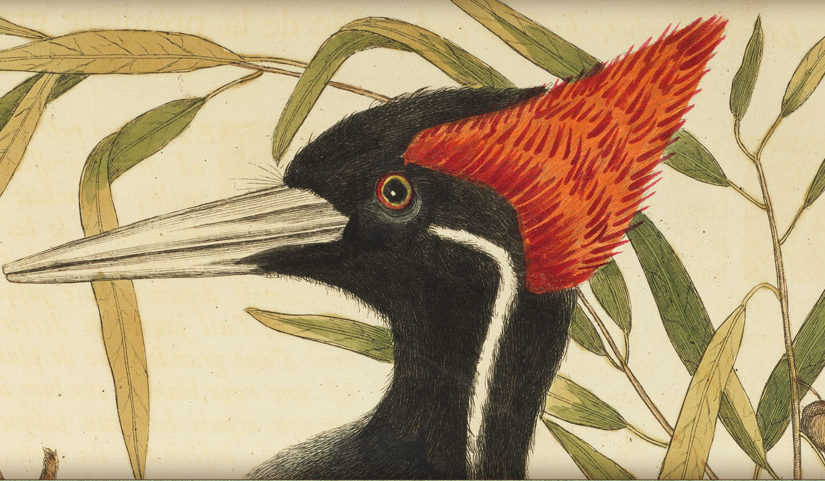 Revolutions in politics, thought, science, society, and art swept through Western Europe during the century and a half that stretched from the 1680s to the early 1800s, the period often referred to as the Enlightenment. Significant advances were made in the natural sciences. Previously investigated within the presuppositions and methods of theology, the study of nature was now guided by new methods of scientific inquiry. Examining specimens and observing plants and wildlife in their native environments allowed a new generation of natural scientists to compose scientifically verifiable accounts of the natural world exemplified by Georges-Louis Leclerc, Comte de Buffon’s Histoire naturelle and Mark Catesby’s Natural History of Carolina, Florida, and the Bahama Islands.

Emerging from this work was ornithology, the study of birds. Birds captured the interest of eighteenth century society; they were an important food source, used as symbols in armorial designs, and were a source of amusement for hunters, artists, and onlookers. This new discipline brought more accuracy and realism to descriptions of birds. Personality traits such as a goose keeping careful watch and having the power to understand wisdom as the Roman naturalist, Pliny the Elder, records yield to physical characteristics such as Mark Catesby’s description of the white-bill woodpecker’s bill being “white as ivory, three inches long, and channelled from the basis to the point.” Books about birds now brought empirical knowledge and life-like illustrations to a new audience. Notable in this effort are Thomas Bewick and his early field guide, A History of Birds, compact and written for the general bird enthusiast.

The exhibit is open to the public.

Come see other natural histories and books on ornithology in Special Collections including:

Society for Promoting the Education of the Poor of Ireland, The Natural History of Remarkable Birds (1821)