Seven Notre Dame students who enrolled in the Winter Session course, “Stories of Power and Diversity: Inside Museums, Archives, and Collecting” worked together to create this unique show. The students ranged from first year to graduate students and their fields of study included history, English, anthropology, classics, art history, and liberal studies. Their show brings together seven items from three Notre Dame campus repositories – Rare Books and Special Collections, University Archives, and the Snite Museum of Art – and reflects on how they intersect with themes of diversity.

We invite you to explore Still History?’s seven showcases. Each explores a single object or set of objects. Each also includes a personal reflection statement about the student’s work on this project. The show presents a variety of twentieth-century visual and textual sources, including photographs by Laura Gilpin, Aaron Siskind, Ernest Knee, and Mary Ellen Mark, a poster supporting women in prison, a pamphlet on disabilities, and articles from the Observer. Questions about representation link these disparate sources and thread the showcases together in interesting ways. The students ask how art and artifacts do and do not represent the experiences of Black, Native American, LGBTQ, mentally- and physically-disabled, incarcerated, poor, and Hispanic-American individuals and groups. An introduction and afterword by RBSC’s own curators, Erika Hosselkus and Rachel Bohlmann, who taught this new course, bookend the show.

This exhibition invites viewers to connect with holdings in the University of Notre Dame’s campus repositories and to ongoing campus and nationwide conversations about diversity and representation. We are pleased to share it here!

There are no events scheduled to be hosted in Rare Books and Special Collections in December 2019 or early January 2020.

Rare Books and Special Collections will remain open for our regular hours during Reading Days and Exams (Monday through Friday, 9am to 5pm). We welcome those looking for a quiet place to study.

The current spotlight exhibits are Touchdowns & Technology: The Evolution of the Media and Notre Dame Football (September – December 2019), a display of selected materials from the University Archives, and Irish Art and Literature from Graphic Studio Dublin (December 2019 – January 2020) in conjunction with the Snite Museum’s exhibit “Looking at the Stars”: Irish Art at the University of Notre Dame. 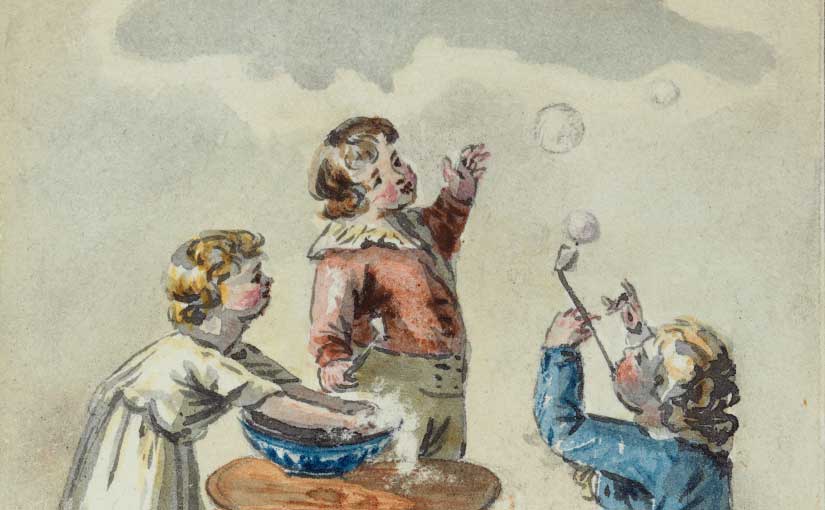 Last year, Hesburgh Library acquired an album of drawings of the famous Edgeworth family of County Longford, Ireland. The album, showing the artistic endeavors of the family, shows a different side to a family best known to us for Maria Edgeworth (1768-1849), a leading writer of her time. It is Maria’s step-mother, Frances Edgeworth, and some of the children of Richard Lovell’s third wife, Elizabeth Sneyd, who are the artists of this album.

On August 17, 2019, Notre Dame’s Snite Museum opens a major exhibition of Irish art, “Looking at the Stars”: Irish Art at the University of Notre Dame. This exhibition includes items from Special Collections. To complement this exhibition, we are featuring an example of Irish art from our collection in our September 2019 Spotlight Exhibit, Art in a 19th-Century Household in Ireland: The Edgeworth Family Album. This spotlight exhibit runs through September 2019. Frances Beaufort (1769-1864) was born in Navan, County Meath, where her father, Rev. Daniel Augustus Beaufort, was Rector. Having attended Mrs. Terson’s school in Portarlington, she had lessons in art from a number of artists including Frances Robert West, Master of the Dublin Society’s School of Figure Drawing.

The Edgeworth and Beaufort families were acquainted. When Frances was asked to provide sketches for a proposed illustrated edition of Maria Edgeworth’s The Parent’s Assistant, her relationship with Richard Lovell Edgeworth developed and soon they were married. In spite of being younger than her oldest step-daughter, renowned writer Maria Edgeworth, the women became close friends.

Both families were intensely interested in learning. Richard Lovell Edgeworth (1744-1817) was an inventor, writer and landowner, and was particularly interested in the education of children. In the Edgeworth household, children were instructed by other family members, and their reading and activities covered a broad and ambitious range. Emphasis on education is apparent in Maria Edgeworth’s books. Her opinions on education are clear not only in her books for children and parents, but in novels such as Belinda and The Absentee, which have examples of appropriate education—in one case, the scientific education of a family in the upper class, and in the other, the practical education that Edgeworth considered appropriate for the children of tenants. Frances encouraged her children and step-children to draw. The subject matter of the drawings shows a marked interest in working people who might have been tenants, servants or estate-workers. Charlotte Edgeworth (1783-1807) was exceptionally talented, and though she died at twenty-four years of age, she was known for technical expertise, drawing, and poetry.

Many drawings in the album are illustrations for stories by Maria Edgeworth. The Parent’s Assistant includes the tale “Waste Not, Want Not”, in which a lazy and greedy boy is compared to his more virtuous cousin. The picture shown below illustrates the following passage from the story.

Hal came out of Mr. Millar’s, the confectioner’s, shop with a hatful of cakes in his hand. Mr. Millar’s dog was sitting on the flags before the door; and he looked up, with a wistful, begging eye, at Hal, who was eating a queen-cake. Hal, who was wasteful even in his good-nature, threw a whole queen-cake to the dog, who swallowed it for a single mouthful. The Edgeworth Family Album is on display in Special Collections through August and September 2019.

The tour will commence at 4:00 p.m. in the Hesburgh Library Lobby and will continue to three sites across campus where liturgical vestments are exhibited. Guests will be guided through the Sacristy Museum at the Basilica of the Sacred Heart, Rare Books and Special Collections at the Hesburgh Library, and the Scholz Family Gallery at the Snite Museum of Art.

A panel discussion will be held in the Annenberg Auditorium of the Snite Museum of Art (lower level) following the tour, and then a reception in the Atrium of the Snite.

Sponsored by the Center for Italian Studies.

The spring exhibit, As Printers Printed Long Ago. The Saint Dominic’s Press 1916-1936, curated by Dennis Doordan (Emeritus Professor, Notre Dame School of Architecture), opened in January and runs through the summer. The exhibition features different types of publications and posters produced by Saint Dominic’s Press, setting the story of the press within the larger history of the private press movement in England and examining its artistic as well as literary achievements.

The current spotlight exhibits are: Purchas his Pilgrimes and John Smith (March 2019), and The Work of Our Hands: A multi-venue exhibition of liturgical vestments organized in conjunction with the Notre Dame Forum 2018-19: “The Catholic Artistic Heritage: Bringing Forth Treasures New and Old” (March – early June 2019).

Rare Books and Special Collections will be closed April 19
in observance of Good Friday.

Tuesday, October 31 at 4:30pm | “Russia’s 20th Century in Ten Short Stories” by Michael Khodarkovsky (Loyola University Chicago). Sponsored by the Russian Program within the Department of German and Russian Languages and Literatures at Notre Dame.

The monthly spotlight exhibit for October is Images of David and Goliath in the Sixteenth Century, curated by Julie Tanaka. The is exhibit is hosted in conjunction with the exhibit “Rembrandt’s Religious Prints: the Feddersen Collection at the Snite Museum of Art” (September 3 through November 26, 2017).

The summer spotlight exhibit, “Which in future time shall stir the waves of memory” — Friendship Albums of Antebellum America, has been extended through October. The fall spotlight exhibit, opening in November, will feature highlights from the department’s collection of approximately 400 pieces of baseball related sheet music. joined Rare Books and Special Collections in August 2010 as Curator of Ancient and Medieval Manuscripts. Trained in Greek and Latin with particular interests in textual criticism, Latin paleography, and manuscript studies, Dave earned his B.A., M.A., and Ph.D. from The Ohio State University. His doctoral research examined the transmission of the Roman poet Ovid in the Middle Ages and culminated in his dissertation, “A Critical Edition and Study of Arnulf of Orléans’s Philological Commentary to Ovid’s Metamorphoses,” under the supervision of Professor Frank T. Coulson.

Since coming to Notre Dame, Dave has been engaged in numerous projects that have brought attention to the library’s Medieval manuscript collection. He co-curated an exhibit with his colleague, David Sullivan, titled Readers Writing Books: Annotation in Context, 1200-1600 in Spring 2012 that featured medieval annotations in printed texts. Then in Spring 2013, Dave curated his first full exhibit, Hour by Hour: Reconstructing a Medieval Breton Prayerbook, and a version of this was put on display at the Snite Museum at Notre Dame for the Medieval Academy of America annual meeting in Spring 2015. This exhibit featured a fifteenth-century Book of Hours from Brittany, France that had been cut apart so that individual leaves could be sold. In curating this exhibit, Dave aimed to reconstruct the entire manuscript, searching for the various leaves that had been sold, and to inform viewers about the practice of book breaking.

Dave’s current exhibit features papal manuscripts, books, and other materials related to the Vatican. Vestigia Vaticana: An exhibition of papal manuscripts, books, and more in conjunction with the conference “The Promise of the Vatican Library” at the University of Notre Dame opened May 4, 2016, to coincide with the conference.

In addition to highlighting the collection through exhibits, Dave uses the medieval manuscript collection to teach a variety of classes that range from individual tutorials on Western codicology to graduate courses on Latin paleography. Students get hands-on experience analyzing these manuscripts. They learn basic aspects of Western codicology—the study of books as physical objects—including how to read different styles of Latin handwriting, identify bindings, and estimate the period in which the text was written.

Both his classes and exhibits reflect how Dave views his role as curator. He works with manuscripts in the RBSC collections, researching their provenance and content and using them to teach students, faculty, and the public. One of his main goals is to help undergraduates and graduate students develop the skills they need to conduct their own research with these types of materials.

A consummate scholar, Dave has an active research agenda. He recently completed his book entitled A Descriptive Catalogue of the Medieval and Renaissance Manuscripts of the University of Notre Dame and Saint Mary’s College, which is forthcoming from the University of Notre Dame Press. Having finished installing his exhibit, he plans to resume research on a newly acquired fragment that is an unknown witness to a 13th-century French poem to Charlemagne’s mother.

From the hours he spends examining 13th-century papal bulls to evaluate their legitimacy to his dream of acquiring a perfectly glossed, complete, 13th-century copy of Ovid’s Metamorphoses, Dave’s passion for what he does is quite apparent to all of us in Special Collections. To keep up with his research on ND’s medieval collections, follow him on Twitter.