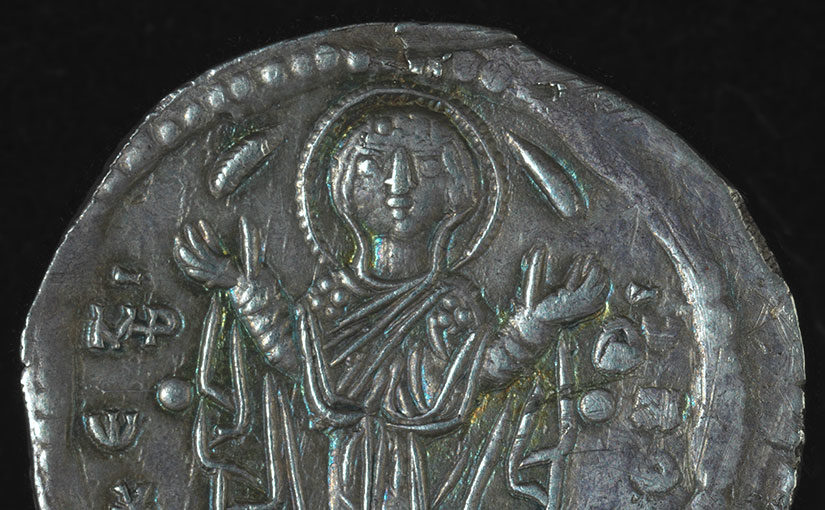 Rare Books and Special Collections possesses a small collection of Greek coinage donated largely by Robert (ND ’63) and Beverly (SMC ’63) O’Grady. The collection is mainly Hellenistic (ca. 323 BC – 31 AD) with an emphasis on the coins of Alexander the Great and Lysimachus, but there are also numerous Seleucid types and coins of other major Hellenistic personages. However, four Byzantine coins were also donated by the O’Grady’s which stand in stark contrast to the Hellenistic examples because they feature Christian imagery.

One such coin is this “two-thirds miliaresion” struck in Constantinople under Constantine X Doukas, the Byzantine emperor from 1059 to 1067 AD and the founder of the Doukid Dynasty. He lost much of the Byzantine territories in Italy and the Balkans, and was also defeated by Alp Arslan, the second sultan of the Seljuk Empire, resulting in the loss of the Armenian capital.

The obverse of the coin depicts Mary as the Theotokos (i.e. Mother of God) in the orans pose (praying with outstretched arms). The miliaresion (μιλιαρήσιον) was the name given to various Byzantine silver coins, most of which were made during the 8th-11th century. During the 11th century, the miliaresion was minted in fractions of one third and two thirds (shown here). This denomination ceased to be used after 1092 and was replaced by the Komnenian emperors.

The text on reverse of coin contains the inscription: