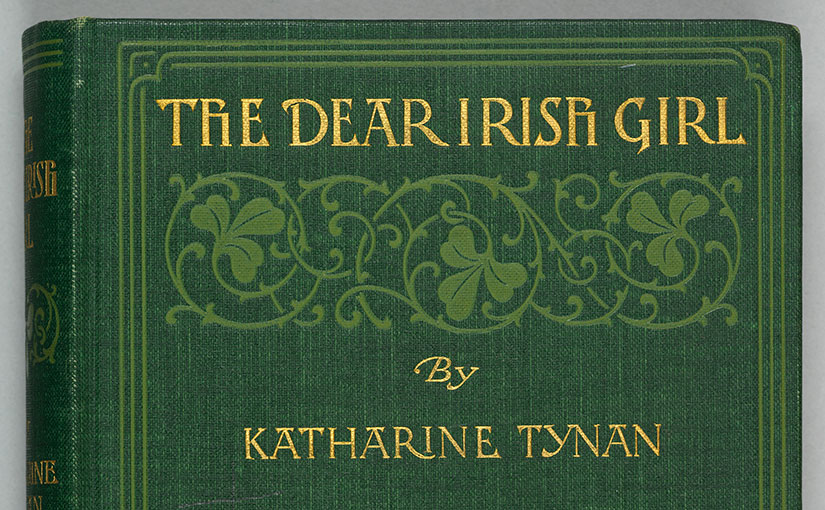 As Seamus Deane observes, ‘fiction – quite as much as history, propaganda, or religious works – was a form of knowledge or, at the very least, a mode of writing that moulds attitudes towards knowledge’ (Loeber, xvii).

Since the Loeber Collection arrived, over two thousand editions have been added to the Irish Fiction Collection, including children’s fiction, detective novels, ‘Troubles Fiction’ of Northern Ireland, and romances. Novels from the nineteenth century and earlier are still sought and added.

Even where a text is available in multiple formats, such as scholarly edited texts of Maria Edgeworth or Sidney Owenson, early editions in their original printing and binding have many stories to tell us of the readership and of the value and popularity of individual novels.

Among the early examples of ‘Irish Gothic’ are Regina Maria Roche’s novels. The Children of the Abbey, first published in 1796, is her best-known novel today. It is referred to in Jane Austen’s Emma, an indication of its popularity. One of the most frequently reprinted novels of the nineteenth century (Loeber 1136), the Hesburgh collection holds many editions including illustrated editions and multi-volume editions.  Shown here are two late nineteenth-century American editions, possibly abridged, both with illustrations by Philadelphia illustrator F. O. C. Darley.

The above cover shows The Girls of Kings Royal, a novel by one of the earliest and most prolific writers of stories for girls. L. T. Meade, or Elizabeth (Lillie) Thomasina Toulmin Smith, was born in County Cork in 1844 and spend most of her adult life in England. Besides stories of schoolgirls, she wrote fiction for adults, including crime novels featuring a female detective. With almost two hundred titles by L. T. Meade in the Hesburgh Irish Fiction Collection, possibly the largest L. T. Meade collection besides that at Cornell, it is probably only about two-thirds of her output.

The British edition shown here has gilt-edged pages and eight coloured illustrations by Gordon Browne. The collection includes also an American edition published by Hurst of New York also in 1913, and illustrated by Charles I. Wrenn.

Gerald Griffin’s The Collegians, a novel based on a murder that occurred in Limerick, was first published in 1829, and was popular throughout the nineteenth century, with many editions published. The story also inspired a play by Dion Boucicault. Editions in the Irish Fiction Collection span a century, from the first edition to the Talbot Press editions of 1919 and 1934 which have an introduction by Pádraic Colum.

Shown here is the Warne’s Library of Fiction edition copy which contains lists of novels from Warne’s various series in the inside covers. The back cover advertises Norton’s Camomile Pills, for ‘all who suffer from indigestion, sick headache, bilious and liver complaints, hearturn, and acidity of the stomach, depressed spirits, disturbed sleep, loss of appetite, dispepsia, spasms, general debility, costiveness, &c.’

Katharine Tynan (1859-1931) wrote over one hundred novels along with poetry, memoirs, and articles of various kinds. She was involved in Irish literary society and was encouraged in her writing by W. B. Yeats, among others. Hesburgh Special Collections holds at least fifty titles by Tynan.

The Loeber Collection includes a first edition of The Dear Irish Girl, published in London by Smith and Elder in 1899, but the cover shown here is from the 1899 edition published in Chicago by A. C. McClurg. This copy came to us with the library of Captain Francis O’Neill, who gave his library to the University in 1931.

Thanks to the acquisition of the Loeber Collection and the continued work in building the Irish Fiction Collection, scholars of Irish Studies may find a large body of fiction from any time and in all genres, from the seventeenth to the twenty-first centuries.