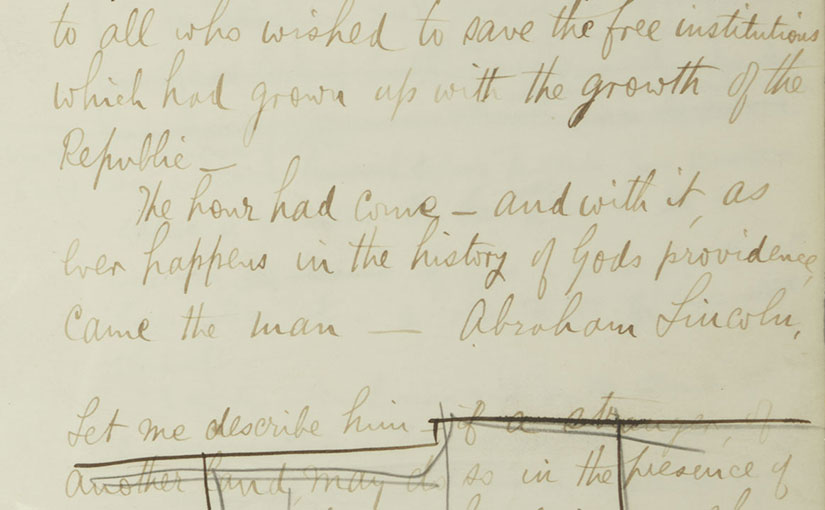 Bram Stoker (1847-1912), when he was manager of the renowned English actor Henry Irving, made many trips to the United States. Over the course of these visits and perhaps after meeting the poet Walt Whitman in 1884, he became intrigued by Abraham Lincoln. In the late 1880s and 1890s, Stoker lectured on Lincoln at numerous venues in both the United States and Europe. In composing his lecture, Stoker drew on many of the standard sources of the day and also quotes Whitman. Stoker emphasizes slavery throughout and Lincoln’s role as emancipator. A long prelude provides background on the “peculiar institution” in the United States and the sectional crisis of the 1850s. Then follows the life of Lincoln proper. Stoker’s attitude toward his subject is reverent in the extreme. Explaining that “the hour had come for the final struggle . . . between slavery and freedom,” Stoker reiterates to the audience in introducing his subject, “The hour had come—and with it . . . came the man—Abraham Lincoln.”

Notre Dame holds the original, working copy of Bram Stoker’s 152-page, unbound manuscript. Approximately half of the Notre Dame manuscript is a single, essentially sustained narrative though deletions, additions, and corrections abound. The rest consists of variations on portions of that narrative inserted, perhaps, to suit a particular audience.