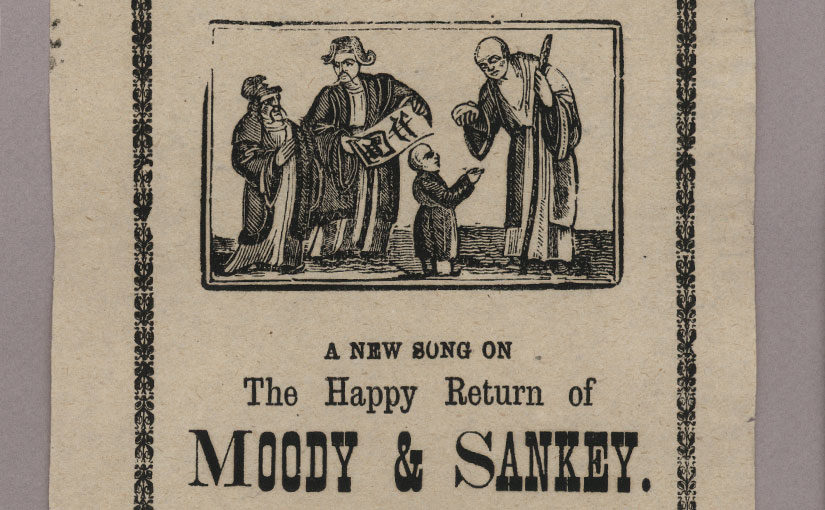 The Irish Broadside Ballads are a treasure trove of nineteenth century social media, including commentary on economic affairs, accounts of crimes and tragedies, and political news and opinions.

We thought our readers might enjoy seeing a sample from our collection. The collection may be viewed online.

While the authors of many ballads remain unknown, some ballads may be traced to their author. This ballad, ‘A New Song on the Happy Return of Moody and Sankey‘, is described in an engaging article by Robert Gahan, ‘Some Old Street Characters of Dublin’, in the Dublin Historical Record of December 1939.

Gahan describes a trio of street musicians known as Hamlet, Dunbar and Uncle, who performed together on Dublin’s streets on Thursday, Friday and Saturday nights in the 1870s. He goes on to tell us the circumstances that led to this ballad:

In 1874 the eminent Evangelists, Moody and Sankey, came to Dublin ; walls and hoardings were covered with posters announcing their meetings, and Dublin was, as a prominent newspaper said, “greatly stirred.” “Hamlet” was stirred too, but it was to compose in “appreciation” of the evangelists. The song the trio let loose upon Dublin… is “A New Song on the Happy Return of Moody and Sankey.”

The collection contains many more commentaries on events of the time, including the imprisonment of Fenian leaders, the Great Chicago Fire, the Phoenix Park Murders, to name only a few. A form of social media, they often circulated widely, passed along by oral transmission as well as via the printed sheets.

To examine these ballads, visit the Irish Broadside Ballads page.