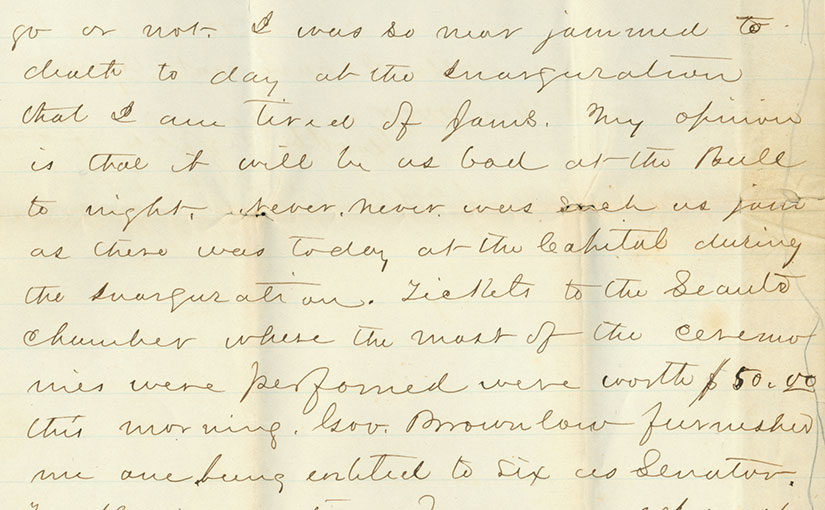 James Monroe Meek wrote to his wife, Elizabeth, that the presidential inauguration was a “terrible jam”. In his letter of March 4th, 1869, he describes the pageantry of the inauguration of Ulysses S. Grant as President of the United States, and of Schuyler Colfax as Vice President.

… I saw the great peageant of the inauguration today and it was worth the trip. There was in the Senate all the celebrities of the Nation. President Grant, Vice President Colfax, the Supreme Court with Chief Justice Chase and associate Justices, and Senators, the diplomatic core, with their court dresses. You would have been more pleased with the dresses of the Diplomatic members than any thing else. They looked rather fine among our plain dressed people. The gold lace and Stars of honor, plumes epauletts and Stripes dimonds and almost every ornament made quite an imposing and elegant appearance. There was ease grace and brilliancy about it.

Today’s reader is reminded that there was no sound system for President Grant’s inauguration. Meek tells his wife about the great crowd assembled to hear Grant’s inaugural address. “Not more than twenty persons heard it. He read it as he had it written. It is very good but quite short.”

Meek, however, goes on to tell his wife that he was “so near jammed to death to day at the inauguration that I am tired of Jams” and does not plan to attend the Ball despite having been invited by one Colonel Temple. “Never, never was such a jam as there was today at the Capital during the inauguration.”

Sure enough, his letter of the following day confirms that he kept his resolve not to attend the ball.

I did not go to the Inauguration Ball. I found it was a humbug, and worse than a humbug. One was in danger of being Suffocated. Several women were carried out fainting from Suffocation. Col Temple and daughter went and the Col told me the only way he could get out was by declaring that his daughter was fainting and by that Means he succeded in getting out. Indeed I expect his daughter was very near fainting.

One gentleman told me he had given ten dollars to get in and five to get out. The men lost hats and over coats the ladies bonnetts, furs shalls and came away without them. The men tying their handkerchiefs around their heads, and the women doing the best they could. The night was very cold. It is said the managers of the Ball made about… twenty thousand dollars. I saw no one that went but what was mad and felt they were swindled.

The letters are part of the extensive Civil War Collection held by Notre Dame’s Rare Books & Special Collections. James Monroe Meek (b. 1821) had served in the Tennessee State Legislature before and during the Civil War, and was captured and jailed several times by Confederate supporters during the conflict on account of his staunch Union support.

One thought on ““Never, never was such a jam as there was today in the Capitol…””