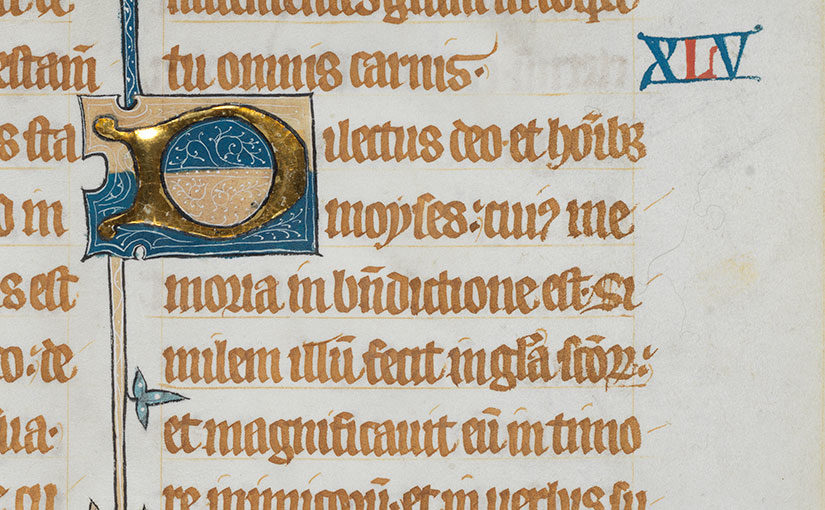 This leaf comes from an enormous Bible (447 x 278 mm) produced as a four-volume set in England ca. 1350. A narrower localization to the region of East Anglia is possible. Decoration and chiefly the illuminated miniatures forge a connection to the ‘Bohun group’ of manuscripts, which includes Psalters, Books of Hours, and other books owned by the Bohun family. The Bohuns were the earls of Hereford and their estates in East Anglia were tied to the royal court, so much that their final heiress, Mary, was the wife of Henry IV and mother of Henry V. This particular Bible in its entirety was perhaps commissioned by Edward III’s eldest son, the so-called ‘Black Prince’ (1330-1376).

The earliest provenance of the Bible is to the West in Cheshire, perhaps the Carmelite house in Chester. This Carmelite connection is reinforced by a historiated initial in the Bible which depicts a Carmelite friar. Likewise, the Carmelite house in Chester was endowed by none other than the Black Prince himself in 1353-1358. The manuscript circulated amongst a number of seventeenth century owners as a large number of leaves was already missing by 1678. Beginning in 1927, biblioclasty prevailed over the manuscript’s centuries of resilience. The Bohuns’ Bible was dismembered on Bond Street, London at the hands of Myers & Company and leaves were sold individually.

The story of this illustrious manuscript is the result of Christopher de Hamel’s research. He alone deduced the Bible’s provenance and identified hundreds of extant leaves scattered throughout the world from Chicago to Tokyo to New Zealand.

Lucy Freeman Sandler, Illuminators and Patrons in Fourteenth-Century England: The Psalter and Hours of Humphrey de Bohun and the Manuscripts of the Bohun Family. Toronto, 2014.