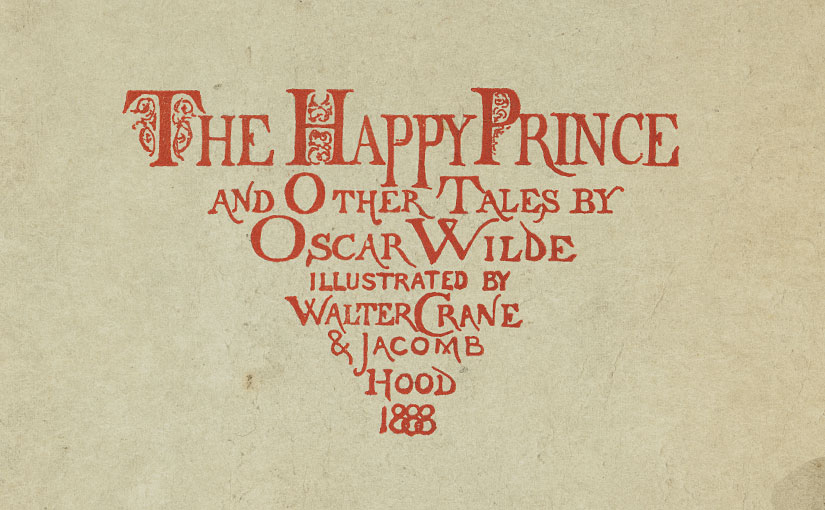 Oscar Wilde’s book for children, The Happy Prince and Other Tales, published in 1888, has attracted many artists and printers over the years. The stories have also been adapted for stage performances including, as I discovered recently, a ballet which will be performed in Grand Rapids, Michigan in 2018.

Wilde’s stories, in the tradition of literary fairy tales such as those of Hans Christian Andersen, depict poverty, suffering, cruelty and arrogance, with sacrifice or martyrdom occurring more than once. In the title story, the statue of a prince who had been sheltered in luxury while he lived, could now view from his pedestal the poverty and suffering in his city, and so he convinced a swallow to carry each of the statue’s jewels to someone in need. The Happy Prince and Other Tales consists of the following five stories: ‘The Happy Prince’, ‘The Selfish Giant’, ‘The Nightingale and the Rose’, ‘The Devoted Friend’, and ‘The Remarkable Rocket’.

Wilde published a second collection of fairy tales, The House of Pomegranates in 1891. These stories are generally more complex and dark, but over the following century many books have included a selection drawn from both books. Out of the four stories in this book, ‘The Star Child’ and ‘The Young King’ are more likely to be included in selections intended for children. ‘The Fisherman and his Soul’ and ‘The Birthday of the Infanta’ are rarely considered suitable for child readers.

A glance at the editions in our collection, with their range of illustrations and book production styles, demonstrate ambivalence in terms of identifying the appropriate audience for Wilde’s stories. Illustrators Walter Crane and P. J. Lynch both illustrated the book for a child audience, while many editions produced in the intervening century are more appropriately seen as gift books for adults. The Happy Prince and Other Tales was first published in 1888 by Alfred Nutt and is illustrated throughout. The frontispiece is by Walter Crane, as are a plate illustrating ‘The Selfish Giant’ (shown below) and one illustrating ‘The Remarkable Rocket’. Crane (1845-1915) is frequently cited along with Randoph Caldecott and Kate Greenaway as one of the premier illustrators of children’s books in Victorian Britain. Small illustrations by illustrator and engraver Jacomb Hood decorate the head of each story. The stories are also richly decorated with vignettes or small decorations. Another early edition was illustrated by Charles Robinson (1870-1937), one of three brothers who were all prolific book illustrators. This 1913 edition includes eleven color plate illustrations in addition to the frontispiece. As these plates are tipped-in, or attached to pages of the book, it is rare to find an original copy with all plates intact.

With over fifty pages decorated by Robinson, this is what booksellers would call a ‘lavishly-illustrated book’, and these illustrations are reproduced in many later editions and adaptations.

The Overbrook Press produced a limited edition of The Happy Prince and Other Tales by Oscar Wilde with wood engravings by Rudolph Ruzicka. This 1936 edition is part of the Hesburgh’s collection of 135 books from the Overbrook Press of Stamford, Connecticut.

Another fine printing, clearly not intended for the hands of children, is the silk-bound edition published by Kurt Volk, New York, in 1955. This book includes the title story, a short essay on ‘Oscar Fingall O’Flahertie Wilde’, and a slightly abbreviated version of W. B. Yeats’ introduction to a 1923 edition of The Happy Prince and Other Fairy Tales. [i]

One of the most recent editions is illustrated by leading Irish illustrator P. J. Lynch, also known for the award-winning book The Christmas Miracle of Jonathan Toomey and his recent book The Boy who Fell off the Mayflower. This edition of Wilde’s Stories for Children, published in 1990, includes ‘The Young King’ in addition to all five stories from The Happy Prince. Lynch has not placed ‘The Happy Prince’ in first place—rather, the book begins with ‘The Selfish Giant’.

Authors of introductions range from W. B. Yeats, who knew Oscar Wilde, to Stephen Fry, the actor who played Oscar Wilde in the film Wilde.

The bibliography below lists the editions held in the Hesburgh Library’s Special Collections.

The Happy Prince and Other Tales. Illustrated by Charles Robinson. London, 1913.
Special Collections: in process.

[i] The full text of this introduction is online in The W. B. Yeats Collection (a Chadwyck-Healey subscription database) which includes the following source information: Introduction to Oscar Wilde, The Happy Prince and Other Fairy Tales (1923). According to catalog records such as in the Hathi Trust, this appears to be volume 3 of a multi-volume collection of the works of Oscar Wilde.