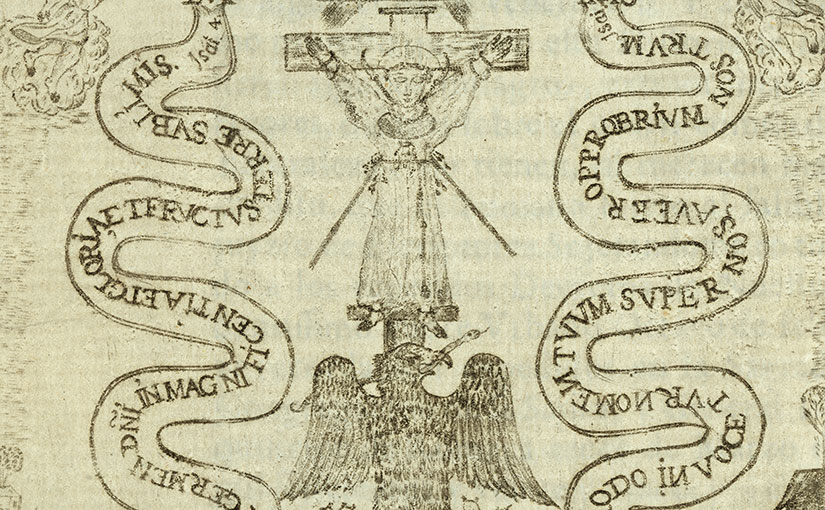 Medina, a member of the Order of the Brothers of St. James of Mexico City, details Felipe’s birth, his initial affiliation with the discalced Franciscans in Puebla, his missionary work in Manila, the omens preceding his martyrdom, the martyrdom itself, and his beatification.

Felipe found himself in Japan when a storm pushed his ship, destined for Mexico, off course. He and companion friars and a number of Japanese Christians were taken prisoner on orders of Japanese regent, Toyotomi Hideyoshi. After weeks in prison, these men were crucified as an example to others who might consider conversion. Medina includes an image of the type of cross used in the crucifixions in his work. It was comprised of a crossbeam on top, one on the bottom, and a smaller piece of wood that the victims sat astride, as if riding a horse, in Medina’s words. A metal hoop encircled the neck and, in Felipe’s case, nearly choked him to death as his feet failed to reach the lower support. Executioners ran lances through the bodies of the Christians as they were suspended from the cross.

The title page is printed in red and black ink, but the highlight of this work is the engraved plate depicting San Felipe as he was crucified. The drawing depicts the martyr on a cross, pierced by lances, and with the ring of metal encircling his neck. Interestingly, the group of symbols representing the ancient Aztec capital of Tenochtitlan and later Mexico City—an eagle with a snake in its beak atop a nopal cactus—appears in front of the cross. An almost whimsical rendering of Mexico City including a cathedral, a bridge, and small human figures, decorates the bottom of the image. This is the only copy of this work in the United States and one of the few copies anywhere containing the engraved plate.