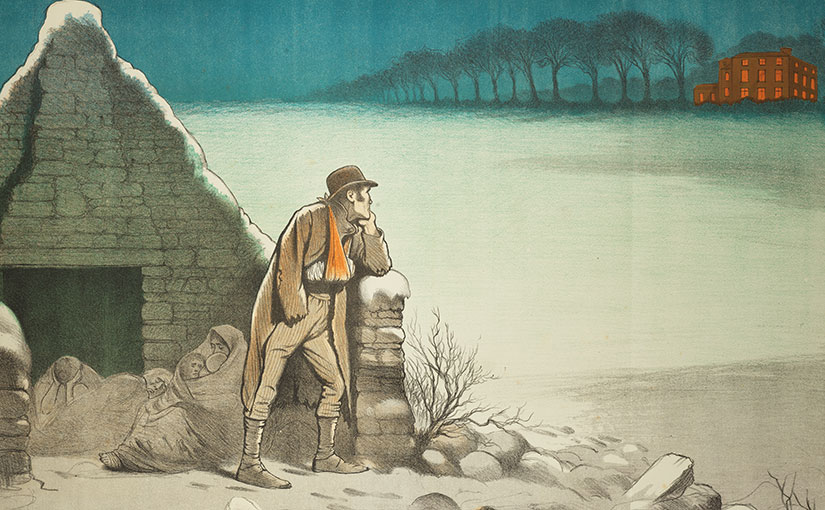 The Weekly Freeman Cartoons contains 48 full-page cartoons bound into a single volume.  The cartoons cover the period from December 1886 to December 1887 and were published on Saturdays as weekly supplements to the Freeman’s Journal.

The Freeman’s Journal, the major Irish nationalist newspaper, was published in Dublin from 1763 to 1924. During the 1880s the newspaper was owned by Edmund Dwyer Gray, who was a Home Rule MP. During his ownership, circulation went up to over 30,000 copies per day. “IN THE HOUSE” (12 February 1887) shows Charles Stewart Parnell, MP, leader of the Irish Party and of the Irish National Land League (founded by 1879), addressing Prime Minister Salisbury, who sits uncomfortably beside a woman representing the evicted tenants of Glenbeigh. Like most cartoons in this volume, this one comments on relations between Britain and Ireland, and in this case refers to the Land War and to the infamous evictions at Glenbeigh, County Kerry.

While the eviction of tenants for nonpayment of rent was relatively frequent, the Land War brought new attention to the Irish and British public about individual evictions through the use of images and descriptions. The Glenbeigh Evictions were much reported at the time and dramatically illustrated in the Illustrated London News. Glenbeigh, County Kerry in the southwest of Ireland was the scene of these evictions. An economic recession and poor harvests had increased agitation among tenant farmers faced with eviction. The landowner received very little rent on the many smallholdings on his land that he inherited, and with high arrears owed in rent, a court ordered 70 of the 300 tenants to pay one year’s rent. However, Father Thomas Quilter, the tenants’ parish priest, and J. D. Sheehan, their MP, advised the tenants to reject this offer.

And so the evictions began on 11 January 1887. Bailiffs burned down cabins and broke down walls to ensure that the evicted families could not return. These evictions received widespread attention, and by the end of January forty families had been evicted. The Detroit Free Press of 22 January 1887 reported on the evictions with the following headline: “POVERTY-STRICKEN PEOPLE. Father Quilter, of Glenbeigh, Says His are too Poor to Pay Rent. THEY ARE LARGELY DEPENDENT ON THE CONTRIBUTIONS OF OTHERS.” Newspaper reporting fluctuates widely between sympathy for the tenants in the face of barbarity such as in the Chicago Daily Tribune and consistent condemnation of the tenants and their leaders from the Irish Times.

The caption for “IN THE HOUSE” in the Weekly Freeman from 12 February 1887 reads:

Parnell to Salisbury. — You thought to force this poor creature into the Poorhouse, and shut her up there, but I have brought her into your own House, where she shall be seen and heard too. Accompanying the cartoon is a ballad, “Parnell to Salisbury” that expands upon this theme. In the second verse, the victim, represented by the woman in the cartoon, also represents the many stories and illustrations of this eviction. The Roe mentioned here is Lanford Roe, the landlord’s agent who directed each eviction in Glenbeigh.

The truth is out! your victim stands
And tells her tale of confiscation,
Of burning cots, evicting bands,
Famine, and widespread desolation!
You little thought Roe’s brutal brands
Would raise so fierce a conflagration!

This volume of cartoons and accompanying ballads and verses appears to have belonged to nationalist archbishop Thomas William Croke (1823-1902). On its flyleaf appears the following inscription:

To His Grace, The Most Revd. Dr. Croke, Archbishop of Cashel.
White Abbey Bazaar 1888
With Father Staples Prayers and Best Wishes.