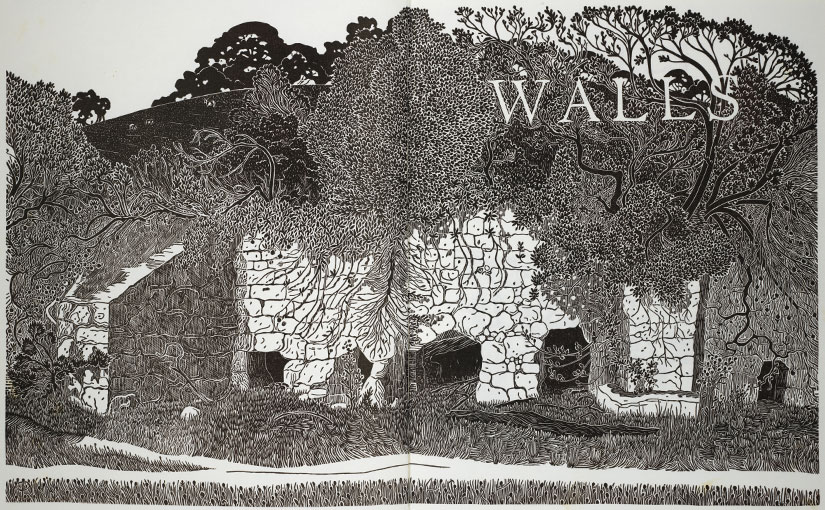 Bringing together his interests in Africa and artistic skills as a printmaker, Tom Killion issued his beautiful, hand-printed Walls: A Journey across Three Continents. Gracing the one hundred sixteen pages of hand-made Japanese Torinoko paper—a lustrous, smooth paper with texture and color resembling a hen’s egg—are the author-artist’s travel log and sixty-five original illustrations.

Before Killion conceived Walls, he had planned to “reproduce an illustrated travel diary from a journey [he] made in 1976-1977” (Walls, colophon) through parts of North America and Europe. Various demands on his time interrupted that project—establishing his own private press (Quail Press in Santa Cruz, CA), earning a PhD in African history from Stanford University, creating woodcut prints of the California landscape, working in Sudan as an administrator for a medical relief program, and traveling through war-torn Eritrea with a group of nationalist rebels. Finally, in 1988, Killion returned to his original idea of producing Walls, but now he broadened the scope of his project to include his travels in Africa, documenting the many types of walls he encountered there as well.

As an artist from the recently colonized land of North America, where social boundaries are defined by wire fences and rivers of moving cars, I was struck by the stone walls which dominated the landscape of Europe and Africa: walls that were built to keep people out, to keep people in, to hide and sleep behind, to throw down and rebuild. These walls were laid across fields and mountains, across rivers and marshes, and in places they clawed at the sky (Walls, 4-5). Nearly six months later, the young traveler sat beneath the Eiffel Tower chatting about the city with a young Algerian. Then over the next two months, he traveled through the French countryside, Switzerland, and then into Italy.

Aboard a train on his way to Athens, Killion met an Ethiopian student headed to medical school in Thessalonika. From this young man, Killion became fascinated with the Ethiopian Empire and how it faced a revolution that overthrew the emperor Haile Selassie in 1974, a power struggle between student revolutionaries and the military, and rebels trying to gain independence for Eritrea from Ethiopia. By November 1976, Killion wound up his travels in Europe and departed Marseilles for Tunis and spent just over a year in Africa, traveling across the Sahara. This trip fed his interest in Africa. As a doctoral student at Stanford, Killion returned to Africa in the early 1980s to conduct research on the Ethiopian labor movement and the national liberation movement in Eritrea (Walls, 89-1) and then went back again and spent from 1987 to 1988 at three Ethiopian refugee camps in Eastern Sudan working as an administrator for medical relief programs. In the midst of the war in Eritrea, Killion documents the struggles—the civil war between the Eritrean Liberation Front (ELF) and the Eritrean People’s Liberation Front (EPLF), EPLF’s revolt against Ethiopia, the conditions of the Eritrean people, continued air raids, and death. Killion’s images reveal his synthesis of techniques that draw on nineteenth-century Japanese ukiyo-e landscape artists, Hokusai and Hiroshige, and twentieth-century American and European wood engraving techniques. The color prints in Walls are produced from woodblocks. Killion began carving the woodblocks for the prints in Walls in 1981 and continued to do so sporadically until the book was completed in 1990. The process to create the final version of each print is lengthy and involves multiple steps (Killion demonstrates this process in a YouTube video). To create the woodblock image, the artist takes his sketch of a scene, reverses it onto a block called the key block. This block contains all of the visual information needed to make the rest of the blocks used to print the various colors in register for the final image. Killion carves the reverse image into the block. He then transfers this image to several more blocks and carves the image into those blocks. Once completed, either a single color or combinations of colors (to show gradations) are rolled onto a block.

Printing the image begins with aligning the first color block that is inked with the lightest color with the key block. Killion then uses his Asbern proof press (a type of press with a fixed bed and rolling carriage made in Augsburg, Germany in the 1960s and 70s) to print the image on hand-made Japanese Torinoko paper. He pulls sheets equal to the edition number plus a few extra just in case. Then this process is repeated with each color block, with one to two days between each printing to allow the color to dry. Each copy of Walls required one hundred ninety-nine pulls to produce. In addition to sketching the images, transferring them to and carving them into blocks, and paying meticulous attention to setting and printing the images, the production of Walls involves a series of other artistic choices. In addition to selecting the type of paper on which to print, Killion chose the typefaces Centaur and Arrighi (the italic of Centaur) with which to print the text of Walls. He then bound the printed text block in raw half-linen and Niger goatskin, and enclosed the finished piece in a matching linen slipcase.