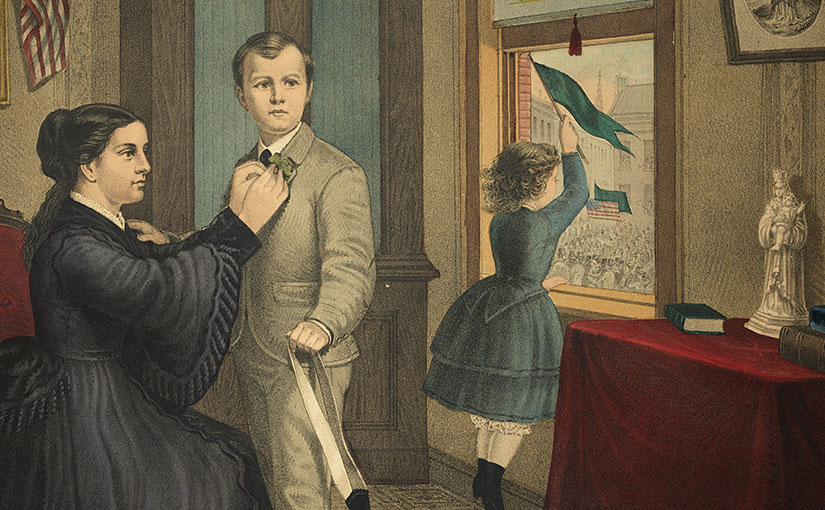 This lithograph was printed in Philadelphia at a time when the general impression of Irish immigrants was that of an impoverished people, unfavorably viewed by native-born Americans. Irish immigration to the U.S. in the 1830s and 1840s was becoming dominated by poor, unskilled rural Catholics, and in the decades following the Great Famine, American cities were inundated by waves of impoverished Irish peasants. “St. Patrick’s Day in America. Commemorative of Ireland’s unswerving fidelity to her ancient religion and the devotion of her exiled children to the sacred principles of her freedom and redemption as a nation.”  Washington: John Reid, 1872.  Lithograph by Hunter and Duval. [i]

Hence, according to historian Kerby Miller, all Irish immigrants were viewed negatively, including those who arrived with education, skills, or capital. He states that “in the eyes of native-born Protestants, middle-class Irish Catholic immigrants were by religion and association not ‘good Americans’, but in the opinion of many of their own transplanted countrymen, they were not ‘good Irishmen’ either.” [ii]

Considering this attitude to Irish immigrants, then, the lithograph doubles as an effective piece of propaganda and a heartwarming picture of family life.  The mother and children are respectably dressed, and the sewing machine suggests an industrious household. Symbols of Ireland include the statue of St. Patrick while the portrait on the wall, of an American soldier, suggests a relative, perhaps even the absent father, fought in the American Civil War.

The mother is pinning a shamrock on the boy’s lapel. The shamrock, emblematic of St. Patrick, is a popular symbol of Irish identity. The family is clearly preparing to take part in the celebration of their Irish identity, while at the same time the image proclaims American middle-class orderliness and industry.

To read about St. Patrick’s Day, see the following books in the Hesburgh Library: