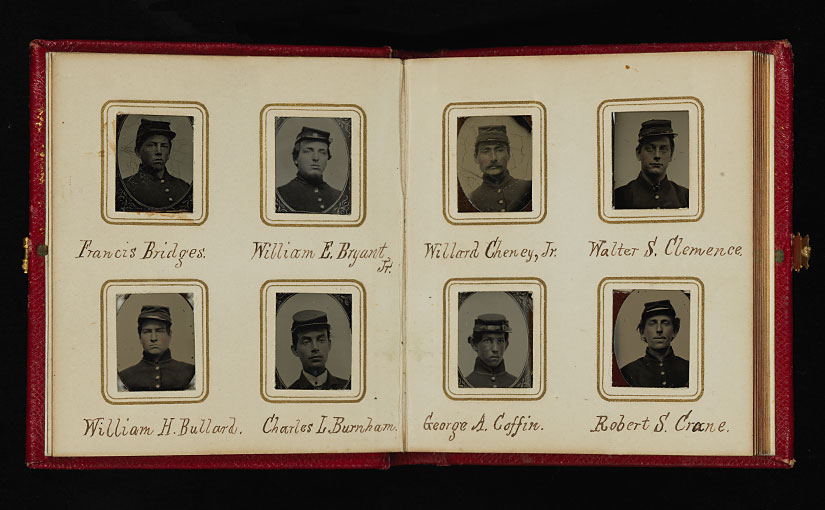 Americans celebrate November 11th as Veterans’ Day. It commemorates Armistice Day—November 11, 1918—when, at the eleventh hour that day, France, Great Britain, and the United States (the Allied powers) and Germany signed an armistice that ended hostilities of the Great War (1914 – 1918). After World War II the United States officially designated November 11th as a day to remember veterans of all wars. However, its WWI origins remain in the Arlington National Cemetery ceremony, which includes a wreath placed on the Tomb of the Unknowns at 11 am.

Hesburgh Libraries’ Rare Book and Special Collections department holds many unique or rare items by soldiers about war remembrance. The Civil War (1861-1865) created a lot of soldiers who, even as they fought, reflected and recorded. Thomas Francis McGrath (1839 – 1922) traveled from Ireland to enlist in the 69th New York Infantry, a part of the Irish Brigade. In an 1863 letter to his mother, he contrasted Irish and Irish-American soldiers who died fighting for the United States, “that land, which gives a home . . . to the . . . oppressed of all nations,” with Irish men who lost their lives in the British army, fighting “under a Foreign Flag . . . for a government that robs his country and banishes her sons to a distant land.”

James C. Woodworth (1839 – 1900) served in the 25th Massachusetts Infantry. He kept an 800-page diary of his wartime experience and collected miniature tintype portraits of soldiers in his company (an opening of which is this blog post’s lead image, MSN/CW 1014-15). After the war both McGrath and Woodworth attended soldiers’ reunions until the end of their lives; McGrath appeared at a monument dedication at Antietam in 1920, when he was in his early eighties, and two years after the end of World War I.