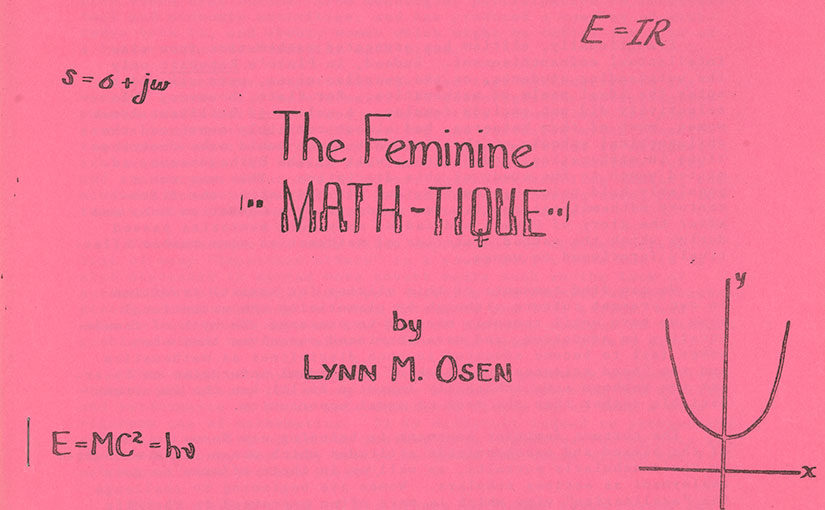 We join the Library of Congress, National Archives and Records Administration, National Endowment for the Humanities, National Gallery of Art, National Park Service, Smithsonian Institution and United States Holocaust Memorial Museum in commemorating and encouraging the study, observance and celebration of the vital role of women in American history by celebrating Women’s History Month.

A lot of recent attention has been paid to the disparity between the numbers of men and women in STEM (science, technology, engineering, and math) fields. Concomitant differences in professional status, pay, and influence, from Silicon Valley companies, to academic departments, to classrooms, are also part of this discussion. It echoes debate by second-wave feminists more than 70 years ago.

In honor of Women’s History Month, Rare Books and Special Collections highlights a new acquisition about women and STEM: The Feminine “Math-tique” by mathematician and psychologist Lynn M. Osen (1920-2003). In this 1971 article, Osen applied Betty Friedan’s idea of the feminine mystique to ways in which women and girls’ potential as mathematicians and ambitions in math-related fields were suppressed and funneled away into the social sciences and humanities. In The Feminine Mystique (published in 1963) Friedan had shown how social expectations and structures established heterosexual domesticity as the singular ambition for post-war American women (particularly white women), to the exclusion of education or professional expertise. Osen finds similar gender-fueled pressures against women and girls in math. “The mathtique,” Osen observes, “perpetuated the idea that mathematics in its various guises is a male domain.” (p. 2)

Like Friedan, who had articulated an unnamed problem experienced by middle class housewives in the post-war period, Osen identifies a similarly unnamed problem in the field of mathematics: how it had become defined as masculine and inimical to women.

“[Mathtique] encourages the socialization process which reinforces and promotes this assumption. It also serves to perpetuate the destructive and pervasive myths concerning women’s aptitudes, accomplishments and ambitions in mathematical endeavors. It breeds and institutionalizes graceless jokes and stereotypes about the helpless, checkbook-bumbling female, the mindless housewife, the empty-headed husband-chasing coed, the intuitive (but illogical) woman who ‘hates arithmetic.'” (p. 2)

To break down the feminine mathtique Osen analyzes the social science and education literature of the previous decade, whose authors had begun to notice that girls and young women were not equally represented with their male peers in math and science study. Answers to questions about the causes of this disparity became part of the Cold War between the United States and the Soviet Union. In 1957 the USSR had launched Sputnik, the first artificial satellite. The Soviets’ bold breakthrough into space elevated anxiety in the US about Soviet military capabilities into a scientific and technological race as well. As American schools beefed up their math and science curricula to fight this new Cold War front, however, educators and scholars noticed that girls and young women were largely absent from the surge for math and science expertise. The disparity was alarming for the waste of brain power and potential competitive advantage against the USSR. It also became a political embarrassment, as comparative studies of the two nations uncovered no obviously similar gender differences in the USSR.

Osen uses the Soviet example to argue that cultural and social differences, not innate abilities, caused women and girls to lag behind men and boys in math. She cites a 1966 British study of women in the Soviet economy in which Russian educators reportedly expected girls and women to perform as well as their male counterparts in math and science. This confidence in female students, the report concluded, “appears to be borne out by the academic records of students . . . the performance of girls was comparable to that of boys in mathematics and physics.” (p. 7)

Osen also uses an historical argument to show that gender differences in mathematical abilities were not innate but contingent. She compares the number of women awarded doctorates in mathematics at the University of California at Berkeley from 1920 to 1949, and from 1950 to 1968. In the post-war period (the “mathtique” era), the percentage of women awarded doctorates in mathematics decreased by nearly half (from 10-11% before 1950 to 5-6% after 1950). Likewise, the percentage of women on the faculty plunged from 20% in 1928-29 to zero in 1968-69. She notes dryly that women did not suddenly lose their abilities to study advanced mathematics after World War II; other factors—cultural expectations, psychological conditioning—were in play (pp. 6-7). Osen concludes that “there is no scientific evidence that any inherently female characteristic enfeebles one as far as intellectual activities are concerned. . . . In countries, cultures, times and intellectual climates in which women have been encouraged to develop their potential, they have obliged by doing so. They can do so again.” (p. 11)

Osen followed this article three years later with Women in Mathematics (1974), a history of “the impact women have had on the development of mathematical thought,” and further dispelling mathtique’s distorted narrative. She included an abridged version of The Feminine “Math-tique” as the book’s concluding chapter.