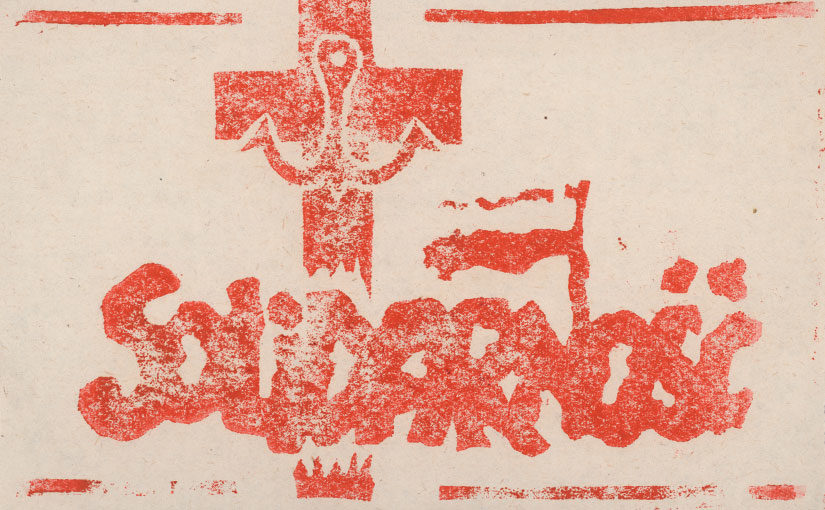 Forty years ago Solidarity (Solidarność) was born in Poland. It became the first Soviet bloc’s independent self-governing trade union and the seat of Polish opposition during the 1980s.

The Hesburgh Libraries recently acquired a Solidarity ephemera collection (MSE/REE 0041) documenting a wide range of activities carried out by Solidarity leaders and supporters. The represented materials include samizdat (unofficial self-published and distributed) books, posters, broadsides, and handbills. For the most part, these were produced in response to specific events, often by hand on poor quality paper, and circulated in small quantities at great risk to their authors, distributors, and readers. The collection captures such inherent qualities of the Solidarity movement as spontaneity, commitment to democratic values, and sacrifices of the Polish people in their struggle for civic and political freedoms.

This popular samizdat comic book tells the story of the Solidarity’s first 500 days beginning with a peaceful strike at the Lenin Shipyard in Gdansk in August 1980 and ending with the tragic events of December 1981, when the Polish government declared Martial Law and arrested many of its leaders and supporters. The movement continued underground until the fall of the communist regime in 1989.

The authors claim that all dialogues in the book represent fragments of actual conversations and speeches. On page 8, the book features events from “difficult January 1981”. Included here is an image of Pope John Paul II, with words of encouragement and support to the Solidarity members, following his meeting with the Solidarity leader Lech Wałęsa in Rome on January 15, 1981.

Photograph of the Solidarity leader Lech Wałęsa (on the right) with two Solidarity Catholic priests, Father Jerzy Popiełuszko (in the middle) and Father Henryk Jankowski (on the left), November 1980.

This self-published booklet reproduces photographs by Adam Bujak, Stanisław Markowski, Andrzej Stawiarski, and Jerzy Szot depicting the funeral and protest marches following the murder of the Solidarity priest Father Jerzy Popiełuszko (1947-1984). He was kidnapped and savagely murdered by agents of the Polish Security Service, and has since been recognized a martyr by the Catholic Church. The booklet also reproduces Pope John Paul II’s words on the death of Fr. Popiełuszko.

This small hand-made handbill (7 x10 cm) features an image of the popular Solidarity leader Lech Wałęsa with an anchor as a symbol of strength, and the word razem (“together”). 1980.

This small hand-made handbill (10 X 14 cm) is one of the earliest versions of the Solidarity logo with a national red and white Polish flag on the letter “N”, denoting “national” unity. Designed by artist Jerzy Janiszewski in August 1980, the Solidarity logo was quickly adopted by the movement members and sympathizers and used on banners, posters, handbills, and graffiti during demonstrations, strikes, and protests. The logo became a powerful symbol of the Solidarity movement. 1980.

These small samizdat handbills (7 x 10 cm) were published and distributed by Solidarity with calls for boycotting (“not to vote” in) communist elections. Elections in communist Poland were undemocratic and manipulated by the ruling totalitarian government. Circa 1980.