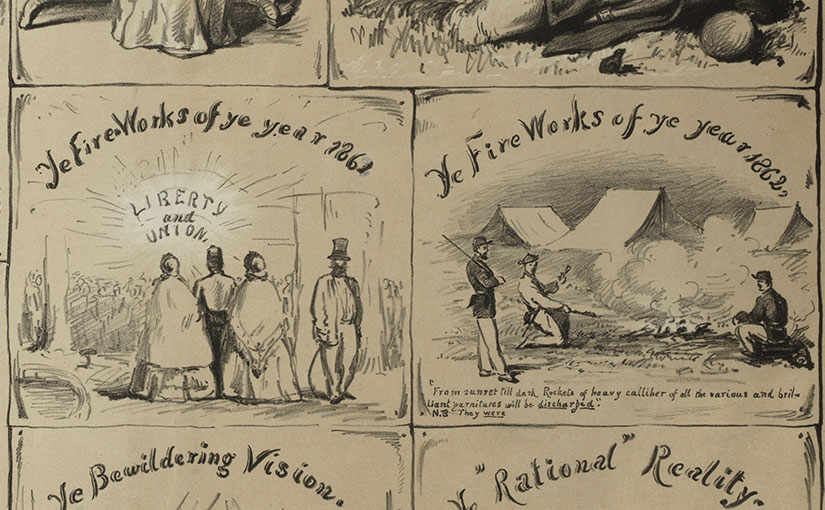 In this print, “Ye two Ga-lorious 4ths,” a Civil War soldier playfully and ironically compared Independence Day observations in 1861 and 1862. Drawing upon his own military experience, the artist compared the way he (and perhaps how he believed his family and friends) idealized military service with the grim realities of army life. Henry Bacon, the young soldier who created the sketches in this lithograph, enlisted in the 13th Massachusetts Regiment of the United States Army a few weeks after July 4, 1861. Severely wounded at the Second Battle of Bull Run, he was discharged on December 19, 1862.

While in the army Bacon sold drawings to Frank Leslie’s Weekly Illustrated Newspaper, a popular publication in the North that fed the public’s voracious appetite for war news including, for the first time, images.

In seven paired images, Bacon mocked his own (and others’) illusions about wartime military service and perhaps also the experience of peacetime service. In “Ye Escort” and “Ye Patriot,” Bacon poked gentle fun at the toy-soldier appearance of a peacetime soldier on escort duty in contrast to the practical, informal, and even patchwork attire of an active soldier “Patriot.” In a pairing that evoked Independence Day by mentioning “Fire Works,” Bacon contrasted the lofty ideals of “Liberty and Union” (references to ending slavery and secession) with a prosaic military camp fire. He also included an ironic note comparing viewing fireworks with the experience of facing artillery fire.  Another pairing, between “Ye Bewildering Vision” and “Ye ‘Rational’ Reality,” compared a copy of the Declaration of Independence placed upon a richly laden table, with torn and battered “Marching Orders” on the ground beside spartan military rations of “hard bread,” and a canteen of water. Noble rhetoric about saving the Union complemented Independence Day celebrations, but it contrasted starkly with the hardships of military life. After his discharge Bacon moved to France to study painting and remained in Europe for the rest of his life.