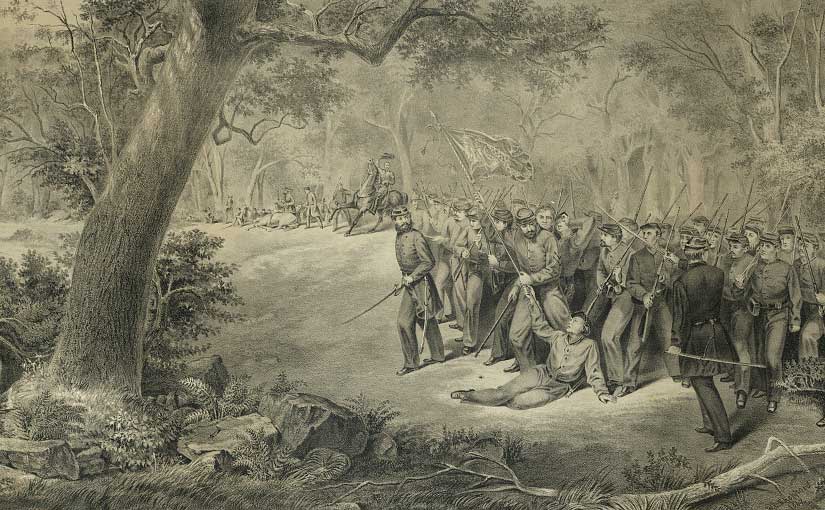 Memorializing the Confederate States of America has been part of a national debate recently, as communities argue over public monuments that valorize a government and its soldiers who fought for slavery. This print, The Charge of the First Maryland Regiment at the Death of Ashby, was published in 1867, just two years after the end of the Civil War. It was an opening salvo in this debate.

Although a slave state, Maryland remained in the Union during the war. After President Lincoln ensured that the legislature voted against secession in the spring of 1861, as many as 30,000 Maryland men fled to Virginia to enlist in the Confederate army. They made up about a third of all Marylanders (black and white) who fought in the Civil War. So many Marylanders joined the Army of Northern Virginia that they formed their own regiment, the Maryland Line. The print commemorated a victory of some of those Maryland Confederates near Harrisonburg, Virginia on June 6, 1862. Confederate troops, commanded by Stonewall Jackson, had engaged with Fremont’s Union forces north of Harrisonburg and were in retreat. Confederate Brigadier General Turner Ashby, in an effort to protect the rear of the retreating army, ambushed a detachment of Union soldiers with Maryland and Virginia troops. When the Union line was reinforced, Ashby was killed as he attempted to charge the Union position. The Marylanders then successfully repelled the Union attack and captured its commanding officer.[1] The print’s image foregrounded Maryland soldiers poised to charge, including a dying Confederate soldier passing the regimental colors to another, a stock scene of nineteenth-century sacrifice and heroism. Ashby’s death is barely discernable in the background. The former Confederates who purchased this print would have already been familiar with Ashby, who had been widely hailed in the South as a hero both before and after his death. As one historian put it, “Ashby represents an early prototype of the Lost Cause hero.”[2] Even small and marginalized, Ashby’s image evoked a set of myths that many whites used to rewrite Southern history into a racialized story of plantation prosperity, contented slaves, and white manly honor.

Maryland raised many monuments honoring the Confederate cause in the century and a half following the war. Two years ago Baltimore removed four Confederate statues from public spaces because they valorized slavery and a government that defended it. The Maryland Historical Trust’s Governor’s Commission on Maryland Military Monuments updated its inventory to reflect these changes in public memory and memorialization. At the same time, however, the Daughters of the Confederacy and other groups rededicated a monument to Ashby outside of Harrisonburg. The debates over history and memorialization continue.